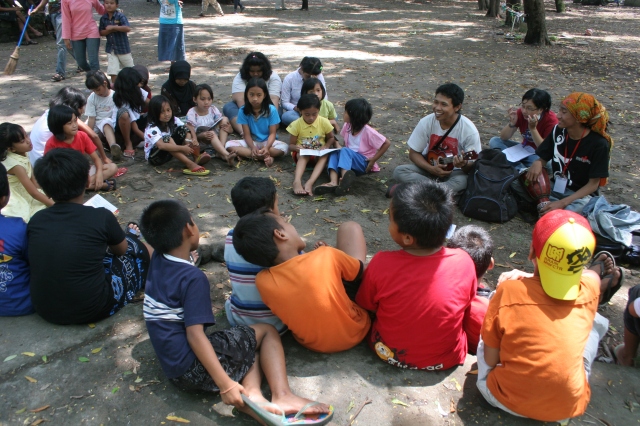 Volunteers play with children at a disaster refugee centre near Yogyakarta, in Indonesia. Photo by Eko Suprati.

Sony Hack: Clooney Says Movie is about Snowden, Not Journalism
The Intercept by Natasha Vargas-Cooper

As curious journalists, tabloid writers, and Hollywood watchers pore over the massive trove of hacked Sony data, the public is being given a rare glimpse into the complicated world of Hollywood and politics. Tucked between bitchy emails about Angelina Jolie and snarky comments on Will Smith’s family are details of a chummy relationship between Sony executives and the CIA, as well as rare insight into how Hollywood views potential movies about NSA whistleblower Edward Snowden.

Russians joke that Roscomnadzor has even blocked the Manezhnaya square, site of January 15 protest, on Yandex Maps. Images edited by Tetyana Lokot.
The rise of disability tech
The Next Web by Nicholas Fearn

Something we don’t hear enough about is how technology is helping the lives of those with disabilities. From robots that can help you remember things, to cars that can drive on their own, disability tech is on the rise.
Ferguson, Social Media and Educational Dialogue
DML Central
Nicole Mirra

As St. Louis County Prosecutor Robert McCulloch stepped to the microphone on the evening of Nov. 24 to announce the grand jury’s decision about the fate of Darren Wilson, the police officer who shot and killed teenager Michael Brown in Ferguson, Missouri, on August 9, I found myself glued simultaneously to my laptop and the television set. I watched McCulloch’s statement on CNN while toggling between Twitter and Facebook to express my emotions in real time and gauge the reactions of friends, colleagues, and the rest of the world online. Physically, I was sitting on a couch in my parents’ home in a southern New Jersey suburb on an early Thanksgiving visit. I needed social media to feel connected to my own home in Los Angeles, to experience this with the city.

On December 9 The Pirate Bay was raided at the Nacka station, a nuclear-proof data center built into a mountain complex near Stockholm.

Diogo Mónica once wrote a short computer script that gave him a secret weapon in the war for San Francisco dinner reservations. This was early 2013. The script would periodically scan the popular online reservation service, OpenTable, and drop him an email anytime something interesting opened up—a choice Friday night spot at the House of […]

The Open Bay: Now Anyone Can Run A Pirate Bay ‘Copy’
TorrentFreak

The Pirate Bay raid last week was a landmark incident which disrupted the BitTorrent ecosystem.

This is the twelfth instalment in the freedom technologists series.

Originally posted on CONNECTED in CAIRO:

What can formulaic expression tell us about media and social change? For one thing, to study technology users rather than technologies, says John Postill in a recent article.
FBI is investigating #Gamergate
Boing Boing by Xeni Jardin

Muckrock filed a Freedom of Information Act request with the FBI for documents related to Gamergate. The request was refused. Read the rest
The FBI has formally accused North Korea of being behind the Sony hack
The Next Web by Napier Lopez

That’s it, it’s official: the US government has now formally accused North Korea of the crippling Sony Pictures hack, following earlier reports of an impending announcement. The FBI’s statement says, despite some earlier reservations, that there is finally “enough information to conclude that North Korean government is responsible for these actions.” It notes that while it can’t share all the information it has, there are at least three important clues it used to determine culpability. The malware used in the attack links to other tools the FBI had previously known North Korean hackers to develop. Specific lines of codes and compromised
Despite the accusations, there’s still little evidence linking North Korea to the Sony hack
Mashable! by Lorenzo Franceschi-Bicchierai

After weeks of rumors and speculation, it looked like the mystery surrounding the hackers who hit and embarassed Sony Pictures in the last few weeks may have finally been solved: North Korea did it, according to anonymous U.S. officials quoted in various news reports on Wednesday.

U.S. Links North Korea to Sony Hacking
nytimes.com – David E. Sanger – Dec 17 – WASHINGTON — American intelligence officials have concluded that the North Korean government was “centrally involved” in the recent attacks on Sony Pictures’s computers, a determination reached just as Sony on Wednesday…
Reaction to the Sony Hack Is ‘Beyond the Realm of Stupid’
motherboard.vice.com – Dec 17, 3:44 PM – It’s been a big day for news surrounding the massive, ongoing Sony hack saga. First, major movie chains announced that they would not be screening The Interview after a nonspecific threat of violence from the Guardians of Peace, the hacking…