The historical peninsula, İstanbul’s Old City, is like a huge outdoor museum, with thousands of artifacts and architectural masterpieces; however, it is

Istanbul Becomes the Last Stop on the ‘Grand Tour’

Istanbul has gone by several names over the years. Founded as the Greek city of Byzantium in 660 B.C., it became Constantinople, a key part of the

The winter conditions in the Turkish metropolis of Istanbul often border on excessive damp and gloom, but the coastal city’s burgeoning art scene

Only two years after Italy was united by Garibaldi, the Italian workers in Istanbulfounded the building with the ideology that they were all ‘Italian’ on ..

ISTANBUL – The Tram once the symbol of the ambition of the ruling elite of the Ottoman Empire, still servesIstanbul today. It has become a symbol not

1453 Journal of Istanbul’s Culture and Art: a Momento of the city

ISTANBUL – ‘1453 Journal of Istanbul’s Culture and Art’ whose title refers to the Conquest of Istanbul in the 15th century, offers its readers a broad

Yabangees’ happy in İstanbul, could do without the traffic jams

The most-preferred city for foreigners is İstanbul, with 106,156 foreign people residing in the city. The word ?foreign? is not actually a good word to

With its motto ?seeing through the mind?s eye,? alldesign, which will be organized in Istanbul on Feb 21 and 22, aims to analyze the use of design in making differences in marketing, branding and ergonomy

Istanbul’s historic Grand Bazaar, one of the biggest and oldest covered markets in the world, will undergo a major restoration project totaling 200

It certainly doesn’t get more Istanbul Turkish Muslim than this ? standing between the Blue Mosque and Hagia Sophia, which was once a church,

Who Did Do More Damage to Istanbul? Crusaders or Islamists?

I decided to write a summary, a timely one on the eve of local elections, after I tweeted the following message a couple of days ago: 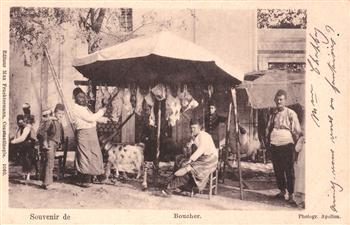 Seyhun Binzet, a chemical engineer and a keen postcard collector, has a stock of over 10,000 postcards collected since 1969

Istanbul theaters to gain speed in May