Skip to content
Clashes in Kiev after protest ban
Violence breaks out as tens of thousands of people gather in the Ukrainian capital Kiev in defiance of new curbs on protests.
Füle calls new Ukrainian laws ?shocking?, ?disrespectful to democracy?

Enlargement and Neighbourhood Commissioner ?tefan Füle said he was ?shocked? and ?deeply disappointed? by new legislation which the Ukrainian parliament hastily pushed though yesterday (16 January).

Supporters of Ukrainian President Viktor Yanukovich hustled a sweeping law through parliament on Thursday in an attempt to curb anti-government protests, sparking an outcry from the opposition and raising tensions on the streets. 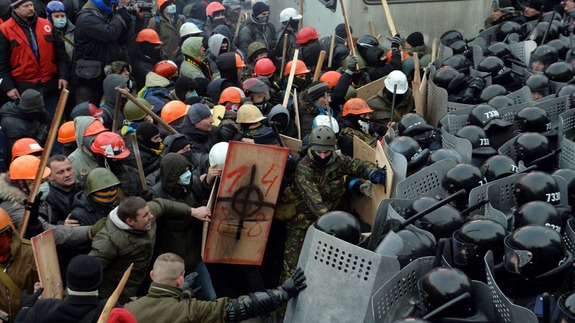 What started out as largely another Sunday of peaceful protests in Kiev, Ukraine, turned violent later in the day, as protesters clashed with riot police. Police vehicles were burned, and opposition leader and presidential candidate Vitali Klitschko was doused with fire-extinguisher foam.

François Hollande: presidential problems
The French leader is eager to put his romantic rides behind him and get on with the business of extending the mileage of his political life
Maltese EU citizenship sale angers MEPs

Malta?s decision to sell passports, hence European citizenship, for ?650,000 to non-EU residents, without any prerequisite whatsoever, not even residence in Malta, has angered MEPs, who debated the issue Wednesday (15 January).

The measure is meant to bridge the budget gap and attract rich investors to the island. The government hopes to get ?30 million the first year of implementation.

Manfred Weber, a member of the European People?s Party in the European Parliament, called for the legislation ‘not put in place’.

European donors have been accused of profiting from their aid budgets, as an increasing amount of their money for the world’s poorest countries is being given as loans ? which have to be paid back with interest.

As budgets tighten, some EU states are using “ambiguous and outdated” international rules on what can count as official development assistance (ODA) to include high-interest loans to developing countries in their annual aid figures, said the European Network on Debt and Development (Eurodad).

Primary elections to elect the new leaders of the European Greens will take place tomorrow. What makes this hustings particularly special?

The Scottish referendum this year, whatever the result, will mark one significant change in British politics, with 16 and 17-year-olds being able to vote ?yes? or ?no? on the nation?s constitutional future. (Find out more here if that applies to you and you haven?t already registered.)