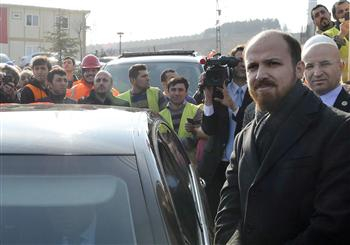 There is no arrest warrant for the PM?s son, Bilal Erdoğan, Justice Minister Bozdağ said

Turkish officials on Thursday reassigned 20 prosecutors working on a corruption inquiry that has targeted the inner circle of Prime Minister Recep Tayyip Erdogan.

‘I am seriously concerned by the speed which these proposals are making their way to the Parliament,’ the CoE?s commissioner for human rights, Nils Muiznieks, told Hürriyet in an interview

5 Key Prosecutors Are Sent Into ‘Exile’

Twenty prosecutors are appointed to different posts today. They are now effectively neutralized at inferior posts, tantamount to a professional exile.

Political crisis and the question of rule of law in Turkey

Turkey?s rule of law is under severe strain and its judiciary is no longer independent. Halil Gurhanli explores why fears of a return to military command should not be underestimated amid corruption, escalating authoritarianism and embittered rivalry between the ruling AKP party and the Hizmet Movement

Turkey?s Supreme Board of Judges and Prosecutors (HSYK) reassigned 20 prosecutors in critical positions, including the Chief Prosecutor of Istanbul

Turkey faces coup d?état attempts whenever it makes economic progress and takes steps to resolve its major problems such as terror, Ala told ambassadors