Sir Tim Berners-Lee: Edward Snowden is an ?important part of the system? in protecting the open Web

Sir Tim Berners-Lee, the father of the World Wide Web, has come out in support of former NSA contractor Edward Snowden, saying that the PRISM surveillance program leak did the world a favor. As a guest editor on the BBC?s Radio 4 Today program, Berners-Lee called Snowdwn a ?really important part of the system.?

2013 in Review: Encrypting the Web Takes A Huge Leap Forward 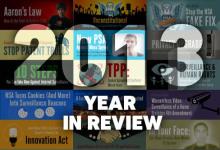 As the year draws to a close, EFF is looking back at the major trends influencing digital rights in 2013 and discussing where we are in the fight for free expression, innovation, fair use, and privacy. Clickhere to read other blog posts in this series.

This year the public got some hints of the scale on which governments are using electronic surveillance to spy on all of us. We learned how pervasively compromised our communications infrastructure is, and how cavalierly governments have spliced, bribed, lied, hacked, cozened, and secret-ordered their way into network backbones. We saw that individual Internet engineers were seen as legitimate hacking targets. We saw that spy agencies speak casually of mastering, controlling, dominating the Internet.