The EU finance ministers agreed on a system for dealing with failing banks on Wednesday. Europe‘s financial institutes are to start building up a joint fund so that in future the owners and investors are the first to pay for bank bailouts. Europe is gradually learning the lessons taught by the crisis, some commentators observe. Others warn that the fund offers no security as long as banks remain too big to fail.

Three months after Germany‘s federal elections, Chancellor Angela Merkel‘s new cabinet starts work today. This marks the third time that Germany has been ruled by a grand coalition. Commentators discuss the government’s European policy and the women who will be in charge of defence and integration.

Commercialisation and nationalism in Polish football

Could there be a link between the increasing commercialisation of Polish football and the rise in far-right hooliganism?

EU summit: Will anyone be signing contracts? 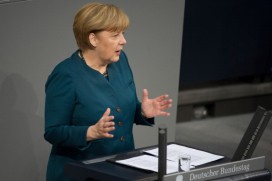 Although the two-day EU summit that begins today in Brussels is nominally about defence policy, the main event most delegations were watching was whether summiteers would sign up to a German-backed plan that would require all eurozone countries to sign annual contracts with Brussels obligating them to liberalise their economies.

The results of a referendum on the definition of marriage in Croatia were disappointing for those who hoped EU accession indicated a shift towards tolerance in the country.  But a conservative-created wedge issue might be the spark for progressive Croatians to push for more long-term change.

Next Commission?s main concern will be inequality, analysts predict

Social inequalities will be the main challenge for future European leaders, according to an EU-commissioned report released on Wednesday (18 December). Europe?s economy is expected to continue its decline, and policymakers should focus on a ?new growth paradigm? centred on society – not growth – the report argues.

The report, conducted by the think tank RAND Europe, attempts to pinpoint issues that will most likely span the EU’s upcoming legislative term (2014-2020).

The European Commission threatened Italy with legal action today (18 December) for possible breaches of the EU’s rules on granting asylum, over its treatment of migrants arriving from Africa on the island of Lampedusa.

A video showing migrants standing naked in the cold while being sprayed for scabies at a detention centre stirred outrage in Italy on Tuesday.

For over four years, the Plataforma de Afectados por la Hipoteca (PAH) have responded to a national housing crisis through grassroots organising and direct action. To this day the movement has prevented over 800 evictions across the country. Here Carlos Delclós interviews PAH activist Elvi Mármol.

While the spate of EU downgrades has slowed to a relative drip feed this year, it turns out there was at least one left in the locker ? the EU, which Standard and Poor?s (S&P) this morning cut from AAA to AA+.
EU and US both threatened by secret trade talks
This week?s talks, like the previous rounds, will happen behind closed doors. The negotiating texts will be kept secret from the public but not from the ca. 600 corporate representatives who have been named ?cleared advisors? for the United States.
The European social agenda: from flexicurity toflexibility ?Tout Court?

A song soon considered as the ?anthem of a generation? in Portugal asked what was wrong with a world where, ?even to become a slave you have to study?.

Before the Eurozone crisis, ?flexicurity? was the model to follow for all European countries. For those confronted with sluggish growth and high unemployment, the agenda promoted by European institutions was a combination of flexible labour markets with few restrictions on the ability of employers to hire and fire, an encompassing safety net with generous income support in periods of unemployment, and active labour market policies designed to get jobseekers back into employment through training and upskilling.

Where are Europe’s leaders?

How do we assess performance, visibility and power in a European context? And why has the EU’s leadership failed to engage with Europe’s citizens? (Video, 18 mins)
Lampedusa deaths: identification and families? right to know
It is a principle that those who perish or go missing in humanitarian disasters should be identified. This principle should also be applied to migration tragedies, though it is infrequently acted on by governments.
Slovakia: right-wing extremism on the rise
Marian Kotleba, a well-known figure of the Slovak neo-Nazi scene, was recently elected as governor of the central Slovak region of Banská Bystrica. Is this the mere consequence of a protest vote, or the indicator of a much more disturbing trend?
The stand-off in Kiev shows the EU’s greatest weakness ? and its greatest strength

A deal between the EU and Ukraine involving a “deep and comprehensive” free trade area, finally seems to have the hit the wall, after weeks trying to reach an agreement.