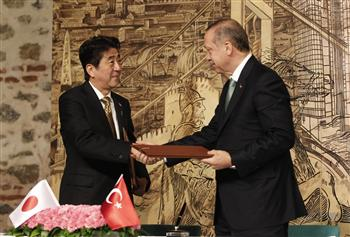 Ahmet Davutoğlu has rejected allegations that Turkey gave intelligence to Israel during an attack against a military base near the Syrian city of Latakia early Oct. 31

Turkish Prime Minister Recep Tayyip Erdoğan proudly describes Istanbul?s newly opened Marmaray railway tunnel, linking Asia and Europe beneath the Bosphorus, as ?the project of the century.? But as a series of increasingly larger and more expensive engineering feats are unveiled, observers are wondering whether Turkey can actually afford the price of progress?

Turkey and Iran Suggest a Thaw in Stands on Syrian Conflict

While the two countries support opposing sides in Syria, their foreign ministers signaled at a conference in Istanbul that both see sectarian violence there as a threat.

Moscow rules out Syria without al-Assad in future

Russia hopes an international peace conference on Syria will be held before the end of this year, Prime Minister Dmitry Medvedev said

Some European Union members are guilty of placing blockages on the opening of new chapters in Turkey?s accession process for political reasons, EU Minister Egemen Bağış has said in an exclusive piece for the Hürriyet Daily News

Officials from US get in line for Ankara visits

Turkey and the United States are intensifying political dialogue as bilateral visits between the capitals gain momentum.

Turkey: Has the AKP Ended Its Winning Streak?

OSW Commentary (Centre for Eastern Studies) No. 117, 7 October 2013 Marek Matusiak This paper argues that the public protests, deadlock on the Kurdish issue, and the unsuccessful attempt to amend the constitution in Turkey between 2012 and 2013 show the limitations of AKP rule. After examining these issues and others facing the country, the

Turkey’s Zorlu in talks on Israeli gas, but politics in the way

By Humeyra Pamuk and Orhan Coskun ISTANBUL/ANKARA (Reuters) – Turkey’s Zorlu Energy is in talks with Israeli firms over the potential for a pipeline to carry Israeli gas to Turkey, industry sources say, but the political rift between the two former allies is holding up progress. Israel is set to become a gas exporter by the end of the decade after the discovery of two major offshore fields off .