US shutdown: a radical Republican triumph 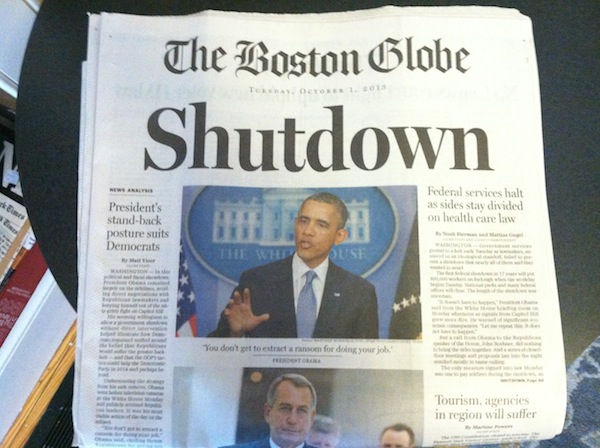 Is the government shut down? Quartz will tell you (and drive a little traffic in the process)

The shutdown of the federal government will be unfortunate for a lot of people, but for journalists, it?s also a chance to get people?s attention. For example, check out The Boston Globe?s print strategy for today:

Chinese Netizens on U.S. Government Shutdown: We Want One of Our Own

This is a guest post from Liz Carter, a senior contributor to FP‘s Tea Leaf Nation.

As the U.S. federal government hurtles into shutdown mode, many in the United States have responded with anger or shame; here at FP, for instance, Gordon Adams comparesthe congressional bickering that gave rise to the shutdown to Shakespeare’s Comedy of Errors.

Gov shutdown affects transparency, too, as FOIA requests reportedly grind to a halt

Government transparency also takes a hit during the insane federal shutdown in the United States. “Several functions dedicated to providing information to the American public have been declared ‘non-essential‘ and are suspended during the lapse in appropriations,” including the processing of Freedom of Information Act (FOIA) at Federal Trade Commission, the Social Security Administration, and the National Labor Relations Board. The Office of Government Information Services, the FOIA ombudsman, has ceased all activities. [Center for Effective Government]

U.S. President Obama slammed Republicans for shutting down the government as part of an ‘ideological crusade’ designed to kill his signature health care law

’90s Flashback: What We Listened to and Watched During the Last Government Shutdown

If you’re feeling nostalgic for the last time the U.S. federal government shutdown, this’ll help — a guide to the top TV, movies and music of the period.

The Anthropologist?s Guide to the Government Shutdown

Many anthropologists work for federal agencies like the the Department of Agriculture, the National Park Service and the Department of Health and Human Services (HHS). These agencies, as well as others, rely on members of our discipline to study, research and provide perspective on how  agency policy affects US citizens in real time. Unfortunately, with the shutdown, many of their activities may be considered ?non-essential? and they will be furloughed. Alternatively, they may be considered ?essential? and asked to work without pay.

The government and administration in the US have been largely paralysed since Tuesday because their financing can no longer be guaranteed. The right wing of the Republican party had blocked the new budget in protest at the upcoming healthcare reform. Some commentators criticise the fact that a radical group is endangering economic recovery in the US and therefore the whole world for ideological reasons. Others call on both sides to take a softer stance.