Turkey Says It Downed Syrian Helicopter in Its Airspace

A Russian-built military aircraft was repeatedly warned to turn back before being fired on by two warplanes, Turkish officials said.
MAIN FOCUS: UN confirms use of poison gas in Syria | 17/09/2013

UN inspectors have found “clear and convincing evidence” of the use of chemical weapons in Syria, according to their report on Monday. The US and Russia had already reached an agreement for the destruction of the country’s chemical weapons on the weekend. Some commentators fear the regime in Damascus will delay the destruction of the weapons, while others believe that the UN report gives the West far more room for manoeuvre.

The foreign ministers of Russia and France disagree publicly over who is to blame for the chemical weapons attack in Syria, after meeting in Moscow.

China on Tuesday refused to say whether a United Nations report into a sarin gas attack in Syria showed that government forces had used the banned weapons.

Democracy, Syria And The Western Way Of War

Obama?s request to postpone a Congressional vote on military action in Syria was a bow to the inevitable; all indicators predicted his defeat.  His retreat from Congress, following on from the vote in the UK Parliament, raises powerful questions about the role of democracy in checking and limiting executive power.  PM Cameron?s quick acceptance of Parliament?s rejection of the option of a military strike against Syria was a milestone in British political history.  Obama understood that, without UN approval, he would at least have to go to Congress for a semblance of legitimacy to support intervention in Syria.

Democracy, Syria and the western way of war

The manner in which the Syrian crisis has been addressed by western polities signals a shift, at least for now, in how acts of war are deliberated by those governments considering military intervention. But how significant is this? There is both some good and bad news in this regard.

Turkey will provide the U.N. Security Council and fellow members of the NATO military alliance with details of the circumstances of its shooting down

A Framework for the Elimination of Syrian Chemical Weapons 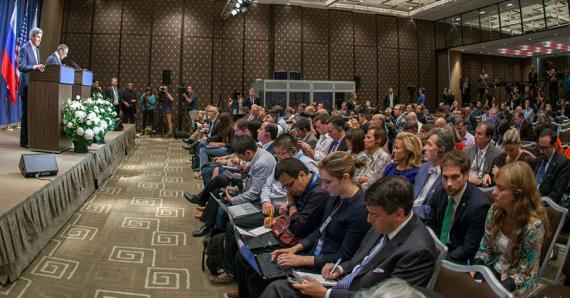 Ankara in no doubt sarin gas used by Syrian regime

Soon after United Nations experts confirmed sarin gas was used in the Aug. 21 attack in Damascus