Turkish PM Erdoğan has accused the main opposition Republican People?s Party of fomenting unrest across the country, particularly through a sectarian tension

Erdoğan Is Not Turkey?s Only Problem

Much of the world has begun to recognize that it must reckon with an increasingly authoritarian Turkish regime built around a popular but deeply flawed leader. What has yet to be understood fully is the separate, and quite disturbing, role played by followers of the cleric Fethullah Gülen.

Turkey: Tea farming to be privatized?

Turkish tea farming was for decades a government-supported endeavor. Now, the private sector is moving in, as free-market policies instituted by Turkey’s governing Justice and Development Party (AKP) reshape this key industr

An evaluation of Turkey?s 2023 targets from the private sector perspective

The year 2023 will mark the centennial of the Turkish Republic.

Negotiations between the Turkish government and the Kurdistan Workers? Party (PKK) are in a state of controlled crisis

The ?Gül difference? in Turkish administration

?The loss of life is not a joke? is the striking sentence Turkish President Abdullah Gül

The Amazing World of Erdogan 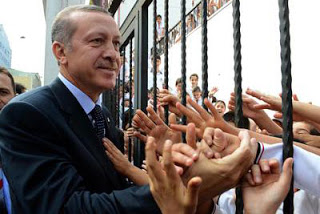 A couple of weeks ago, Zaman daily published an interview with Suphi Saatci, a well-known professor of architecture.

Why is Erdoğan so angry with the CHP?

In his speech on the 33th anniversary of the September 12, 1980 military coup in Turkey

As Turkish prime minister holds meetings before announcing the details of a democratization package, the BDP calls for continuation of process