PHOTO: Churches are Crying in Egypt

In reaction to burning churches, a little girl in Upper Egypt sketched this picture that brought tears to my eyes: pic.twitter.com/iymw3SF49R

Egyptian women rights advocate Dalia Aziada posted this tweet after several Coptic churches were burnt across Egypt following a brutal military operation on August 14 2013, to clear Muslim Brotherhood supporters from sit-in camps in the capital Cairo, where they have been demanding ousted president Morsi’s reinstatement for weeks.

Thirty-six prisoners were killed in Egypt on Aug. 18 during an attempted prison break, the official MENA news agency reported.

Egypt is preparing to recognize one of Turkey?s darkest pages of history, its interim president has said, as the ties between both countries became further strained

The Foreign Ministry has warned Turkish citizens in Egypt to stay away from the demonstrations and not to travel within the country by road, underlining that a state of emergency had been declared by the authorities

Over the past several days Russian newspapers [ru] have [ru] reported [ru], with growing worry, about the 50,000 Russian tourists who run the danger of being stranded in Egypt, if the violence there does not abate. Egypt, along with Turkey, is a popular budget travel destination for Russians, who especially favor the all-inclusive resort towns of Harghuda and Sharm-el-Sheikh on the Red Sea. In fact, it is so popular that even the growing instability, riots, and several hundred fatalities have not deterred many Russians from taking their long awaited vacations.

Egyptian ultras again on focus on both end of street protests

Egypt’s month-long state of emergency is meant to address security concerns, but it hurts people in other ways.

Coup in Egypt has strengthened the hand of al-Assad, SNC’s Turkey representative says

Syrian President Bashar al-Assad is increasingly back in business thanks to Egypt?s coup against the Muslim Brotherhood?s Mohamed Morsi

It may be difficult to understand the Turkish government?s anger against the coup in Egypt

Egypt to Foreign Journalists: Shape Up 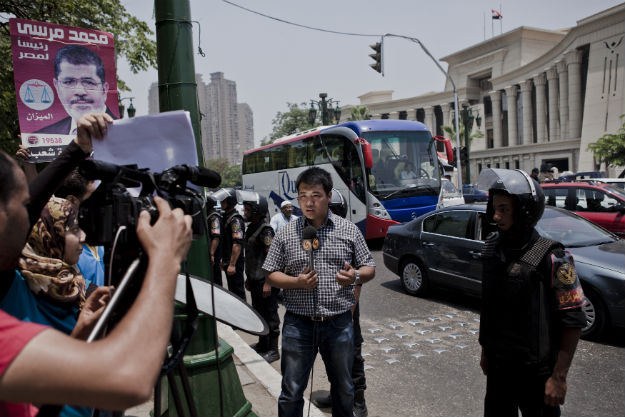 CAIRO — As the confrontation between Egypt’s government and supporters of deposed President Mohammed Morsy heats up, Cairo’s new rulers have a new target for criticism — the foreign press corps.

Crisis of modernity and secularism: the cases of Egypt, Turkey and Bangladesh

Whenever democratic space has opened up, people have been eager to choose those who not only provide a better solution for their economic and social problems, but who can also offer them a recognition of the authenticity of their cultures.

US lawmakers want to cut aid after Egypt ‘massacre’