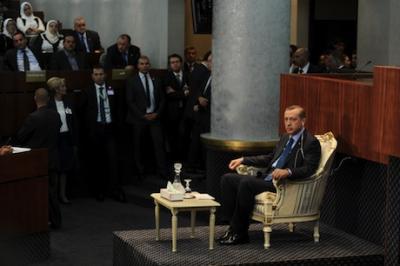 Turkish prime minister Recep Tayyip Erdoğan belongs to a strong leadership tradition. Contextual and personal factors, from a lack of intra-party democracy to an insufficient system of checks and balances have historically empowered Turkish leaders.

The PKK has said peace talks will fail unless Turkey’s government agrees to more reforms.

A De Facto Relationship: Turkey and the Kurds

The Peace and Democracy Party (BDP) was set to organize a demonstration late Aug.4 in the restive Turkish-Syrian border town of Ceylanpınar

Ruling AKP spokesperson Hüseyin Çelik asks for time with the democratization process, says it?s impossible to accomplish everthing all at the same time

The Parliament, according to house regulations, starts its annual recess on July 1 and reopens with a ceremony on October 1.

Turkey’s new charter to have article on domestic violence