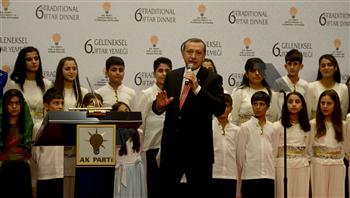 ?Turkey is the voice of the oppressed in the world,? says PM Erdoğan

Brushing aside once again criticism on Egypt, PM Erdoğan said that Turkey was not meddling in any country?s internal affairs but rather was standing as the ‘voice of the oppressed’

By Jonathon Burch ANKARA (Reuters) – Turkish Prime Minister Tayyip Erdogan accused Western and Arab nations of “double standards” for failing to condemn the overthrow of former Egyptian President Mohamed Mursi, whose Muslim Brotherhood like Erdogan has Islamist roots. Turkey has emerged as one of the fiercest international critics of what it has called an “unacceptable coup” after Egypt’s

Turkey beefs up military presence near Syria border after clashes

Turkey is beefing up its military presence along the Syrian border following clashes between People?s Defense Units (YPG), the militant wing of the Democratic Union Party (PYD), and al-Qaeda linked al-Nusra Front.

Merkel vows no shift in Turkey policy after ballot

The many winners of the ?Great Pipeline Race?

The Washington Times Daily (USA) Tuesday, July 9, 2013, p. B4 Nasimi Aghayev * Azerbaijani gas is set to warm Europeans. As any American following the Keystone XL pipeline saga knows, finding new energy reserves sometimes is the easy part, while getting the stuff to the folks who want it can be like the fift

Media Coverage of Climate Change in Turkey: The world versus Turkey

IPC-Mercator Policy Brief, June, 2013 Ömer Lütfi Şen * It is sensible to expect the climate change issue to heat up in the international agenda during the second half of 2013 as the UN?s Intergovernmental Panel on Climate Change (IPCC) will start to release the fifth assessment report (AR5) on climate change late this year

Sisi stabbed Morsi in the back: Brotherhood

Egypt?s army chief, Abdel Fattah al-Sisi, ?stabbed? President Mohamed Morsi in the back when he overthrew the Muslim Brotherhood-linked leader, a senior brotherhood official has said

On June 24, 2012, Ahmad Shafik received 51.7 percent of the vote to become the first president of Egypt

The U.N.’s High Commissioner for human rights is seeking answers from Egypt over the arrests of former President Mohammed Morsi and others

Amid the increasing tensions and threats over the Turkish government?s nearly frozen reconciliation bid to solve the long-standing Kurdish problem, last week?s deadly clashes just a few miles across the Syrian border have brought a ?do-or-die? moment for Turkey?s peace efforts

Any de facto or fait accompli attempts based on ethnicity within Syria would cause bigger crises and Turkey cannot accept this, FM Ahmet Davutoğlu says

Energy project is a new corridor for Turk-Greek ties

A new energy relationship between Turkey and Greece will be a project of ?friendship,? Greek Foreign Minister Evangelos Venizelos has said