ANKARA, Turkey (AP) ? Turkey’s parliament has amended an internal armed forces’ regulation long relied on by the country’s once-powerful generals as grounds for intervening in politics, the state-run Anadolu Agency reported Saturday, in a move that further strips the military of its political influence.

Yet another instance of Police impact:

Police will replace private security firms in universities, Turkish PM Erdoğan announced as a response to the Gezi Park protests

From Lufthansa to the CIA, Turkey’s government has come up with some worrying conspiracy theories to explain Gezi Park

It has to be said that when the Turkish government began to flail around for the “real reasons” behind the Gezi protests, their initial conspiracy theories lacked imagination ? the CIA, Europeans jealous of their economic success, unspecified foreign forces in cahoots with terrorists, Twitter, the “interest rate lobby”, and, of course, the international Jewish conspiracy. What would a search for a scapegoat be in Turkey (or indeed Greece) without our old friends the Elders of Zion?

Mr. Erdoğan, give me back my sons

On top of those arrested in the 1980s and throughout the 1990s, in the last three years alone, an estimated 10,000 political and non-political activists have been arrested on alleged PKK links.

Of the D’Hondt Method With a Barrier

Turkish PM Erdoğan participated in the opening of a new airport in the eastern province of Bingöl, while promising more investments

PM Erdoğan?s offer to go on with 48 articles all parties agree on instead of a completely new charter ge MHP support, while CHP leader speaks cautiously

‘Turkey’s Problem is Erdogan, Not the AKP”

Bilgi University in Istanbul recently carried out a survey among the protesters and established that 92 per cent of the slogans were against Erdogan. So it is fairly safe to say that the prime minister is the specific object of these protests .

Murat Karayılan, the former leader of the outlawed Kurdistan Workers? Party says the peace process may see a deadlock next week ?if Turkey fails to step forward? 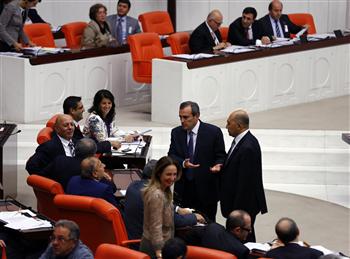 The opposition parties in the Turkish Parliament have adopted a common proposal, while the ruling AKP deputies went to performing the Teravih prayers

Debates over a presidential system in Turkey are not the sole obstacles hindering the drafting of a new Constitution, Parliamentary Speaker says 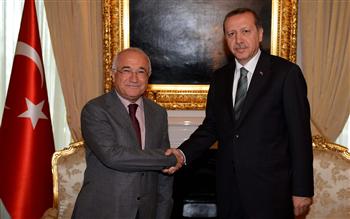 Erdoğan urged to pass through Parliament all 48 articles

PM Erdoğan?s call for the legislative passage of greed-upon charter articles splits the opposition down the middle, with the CHP expressing wariness

France Sees Shades of its Revolutionary Past in Turkey’s Revolt

The recent unrest in Turkey has left eight dead and more than 4,000 injured as well as exposed political divides and ineptitudes in the country that straddles Europe and Asia.

But the consequences of the massive protests, which grew from a movement to stop the destruction of Istanbul’s Gezi Park for a redevelopment project in Taksim Square, have extended far beyond the borders of Turkey.