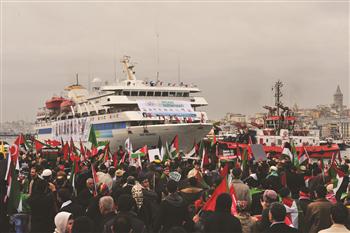 It has been nearly three months since Turkish and Israeli diplomats started negotiations for the terms of an agreement.

CRS Report for Congress (USA) June 21, 2013, 52 p. Jim Zanotti * This report provides background information on Turkey and discusses possible policy options for Members of Congress and the Obama Administration. US relations with Turkey a longtime NATO ally have evolved over time as global challenges to US interests have changed. Turkey?s economic

Turkey summons US envoy over leaks

Mesopotamia Broadcast, which operates a number of channels that are accused of being mouthpieces of the outlawed PKK, has been found guilty of promoting the militant group

Turkey?s Role in Hamas? Cease-fire: A Sign of Turkish Cooperation or Competition?

Bulletin PISM, No. 7 (460), 16 January 2013 The Polish Institute of International Affairs Pinar Elman * The November 2012 conflict between Israel and Hamas was concluded by a cease-fire sponsored by Egypt and with the support of the USA, Turkey and Qatar. Although the cease-fire fulfilled the four states? common objectives, Turkey?s underlying motives

Spain and Turkey: can relations further widen and deepen?

Turkey Policy Brief Series (IPLI ? TEPAV) 10th edition, 2013, 9 p.        Français by Eduard Soler i Lecha * This policy brief evaluates Turkish foreign policy in the Middle East and North Africa in the wake of recent revolutionary events in the region. The brief places Turkey?s reaction to the Arab Spring within

Comparing Turkey to Croatia would be like comparing apples to pears, says Turkey?s EU minister