The EU’s finance ministers agreed on tougher rules for failing banks on Wednesday night. In future shareholders and creditors will be obliged to help cover the cost of their rescue, rather than just the taxpayers. Finally the average man on the street will no longer be bled dry to save “zombie banks“, some commentators comment jubilantly. Others doubt the plan will work when the next big bank is on the brink of bankruptcy.

Finally a deal on the EU long-term budget?

On Wednesday, European Parliament President Martin Schulz wrote to Irish Deputy Prime Minister Eamon  Gilmore warning him that the latest compromise on the long term EU budget agreed by EU leaders in February would be rejected. Yesterday morning, however, a deal was struck between the two negotiating teams. So had member states suddenly given in to all MEPs? demands? 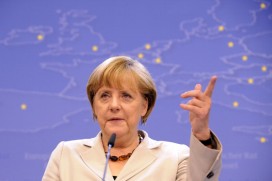 When will there be policing for black people in Britain?

The Metropolitan Police spied on the family of murdered black teenager Stephen Lawrence. Violence against people from black and minority ethnic communities goes on and on.

Is the UK rebate still under threat?

There?s been a lot happening on the EU budget front in the last couple of days ? the 2014 draft budget was proposed yesterday and this morning a deal was finally struck between the European Parliament?s negotiating team and the Irish Presidency on the EU?s long term budget (more on that later).

The ECB head Draghi announces that they are ready to take action but the governments should make reforms..

EU leaders should emphasise that the best way to achieve competitiveness is innovation, education and excellence in energy efficiency. The European carbon trading system should be restored, the lower efficiency of innovation systems and universities in Europe relative to the US should be tackled, and Europe should lead in energy efficiency and alternative energies, writes Karl Aiginger.

AI accuses the Spanish government of protecting the impunity of the crimes committed during this period. The report’s introduction makes the following hardline statement:

EU Finance Minsters come to an agreement on common rules of future bank rescues, which shift the burden from taxpayers to the lenders

Bosnia?s baby revolution: is the protest movement coming of age?

For the first time since independence, Bosnians of all stripes are coming together in a show of unity, to protest the corruption, inequality and incompetence of their politcians. Could this be a real moment of change in Europe’s ‘unfinished country’?

Washington Statement: activists around the world ask the EU for model privacy rules

Activists from around the world have signed onto the Washington Statement, in which they call upon the EU to pass strong, meaningful privacy legislation, pushing back against aggressive corporate lobbying. In the wake of NSA leaks about Prism and other mass-surveillance programs, they see a good EU privacy directive as a lighthouse for good privacy policy around the world. You can sign on too, just by leaving a comment on the site:

Enlargement of the EU may not be in the spotlight these days, but with Croatia joining the EU on Monday and the door opening further to eventual Serbian membership, there is a lot happening, writes Dimitar Bechev.

Campaign groups have accused EU decision-makers of weakening a regulation designed to end the practice of ?beaching? old ships in foreign countries, saying the new law offers loopholes to shippers and would ?unilaterally exempt? European vessels from international rules barring the export of hazardous materials to developing nations.

In recent days, two events have placed the political system of Greece under a certain degree of duress: (1) the disbanding of ERT, the national broadcasting corporation, and (2) the withdrawal of the Democratic Left party, DEMAR, from the governing coalition

The EU suffers from the highest unemployment ever since its start half a century ago.

Its political leaders have been unable to respond with appropriate medicines.

But they are also increasingly unable to explain their citizens what the EU is all about, what it can do and where it is not competent. They are lost in technicalities and details too few people understand.

Good morning, Danish citizen! You are not welcome here…

Cypriot deposit outflows continue but slow in May

As we reported last month, the outflow of Cypriot deposits has continued apace despite the continuation of capital controls (even once the impact of the bank restructuring is stripped out the outflows have totalled around ?3bn for each of the last two months).

What is wrong with the European Commission?

The European Commission, a crucial EU institution, is beset with difficulties. It is popular with neither governments nor voters. Twenty years ago, many people looked to the Commission to set the EU?s agenda and take the lead in managing crises. But few people expect the Commission to play that role today.

The Czech Economy That Didn?t Bounce?

The Czech republic has been making the news recently. On the one hand the country has been on the receiving end of massive, devastating floods, while on the other the country?s government was brought to the brink of collapse (and beyond)  by the resignation  of Prime Minister Petr Necas following the arrest of one of his most trusted aides on corruption charges. After the deluge I suppose.

For the development of Romania?s capacity to participate in the European debate and to influence policy at EU level it is necessary to associate itself with similar countries in terms of interest on certain sectors. In this regard the Latin connection should be exploited, in particular the relation with Italy, one of the founders of