One suspect was arrested for charges related to the rape of a sixteen year-old.

Kazım Bayraktar, attorney of Ethem Sarısülük, claimed that the court did not arrest the policeman suspected of Sarısülük?s murder as it disregarded ?expert and autopsy reports as well as surveillance camera recordings? and only decided upon police testimony.

Turkish PM lashes out at protesters

ANKARA, Turkey (AP) ? Turkish police on Tuesday detained at least 20 people allegedly involved in violent protests, as the country’s prime minister continued to lash out at protesters ? and a BBC journalist ? he claimed were part of a conspiracy to harm Turkey.

No one can order AKP government to remove officials from duty: Turkish PM 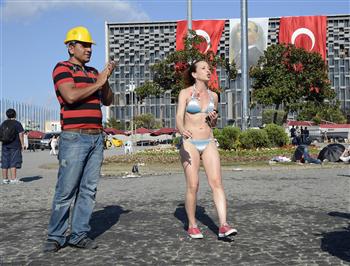 Turkish Deputy PM says he could barely ?restrain? himself from speaking out on bikini woman

Deputy Prime Minister Bülent Arınç said he was ?barely restraining? himself from saying certain things about

Now, after a decade of electoral success and economic growth, governing without a coalition, the army neutralised, in control of the media, the judiciary and the police, Erdogan feels free to move on this crucial symbolic issue of alcohol and its venues.

The BBC has expressed concern after one of its journalists was targeted in a “threatening” Twitter campaign by a senior Turkish politician over her coverage of protests in the country.

The BBC Turkey reporter Selin Girit was accused of “treachery” and acting as a foreign agent in a series of tweets by Ibrahim Melih Gökçek, the longstanding mayor of Ankara, on Sunday. 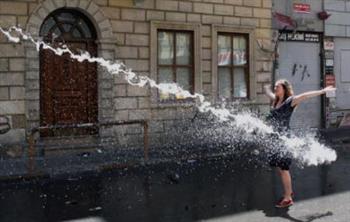 Woman in black, one of the Gezi Park heroes, wanted to show protests? peacefulness

The woman in a black dress who became a hero during the Gezi Park protests after standing in front of.

Yaman Akdeniz is an expert on cyber freedom at Istanbul’s Bilgi University. He says while the importance of social media is growing, he worries about a looming crackdown. “People will now switch more to social media platforms because that is one area

A poll by Bilgi university found that the vast majority of protesters had no connection to any political party. The primary motivation for joining the protests was anti-authoritarianism. More than 90% cited various aspects of authoritarian politics as

Öcalan too will be free, says senior PKK leader

Turkey protests ‘must not derail peace process with Kurdish rebels’

If the peace process is fulfilled and democratization is completed.

The protests aim at sabotaging a possible resolution of the Kurdish issue, PM Erdoğan said.

The Peace and Democracy Party (BDP), which takes an active role in recent efforts to find a peaceful solution

As the two-year mandate of the current Parliament Speaker Cemil Çiçek will terminate.

Kurdish issue can no longer wait

According to Turkish Prime Minister Recep Tayyip Erdoğan, the most important target.