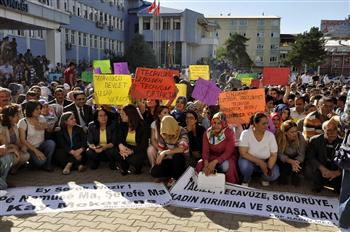 A park in an area considered sacred by the local Alevis in the eastern province of Tunceli faces destruction after a court notice issued last week. 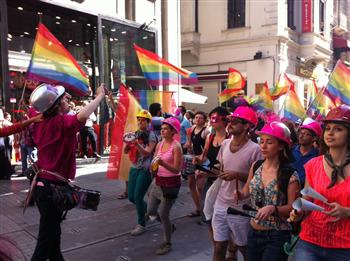 Crowd gathers in Istanbul to mark 1993 massacre in Sivas

Thousands have gathered in Istanbul?s Anatolian shore of Kadıköy to mark the upcoming 20th anniversary of the Sivas massacre..

In the sexual abuse and rape case of a minor..

Şırnak. Citizens against the building of new army stations… via DİHA

The protests might even help to revive Turkey’s moribund accession process to the EU.

The protests that started in Istanbul?s Gezi Park two weeks ago have spread across Turkey and show little sign of dying down. They signify a clash between a modernising Turkish society and a still rigid and old-fashioned political system. The protests have resulted in the tragic loss of several lives and are endangering Turkey?s hard-won economic stability as investors take fright. But they also have a silver lining. They might force the government to reconsider its rejection of pluralism. And they might even help to revive Turkey’s moribund accession process to the EU.

Technically, if over seven people meet on the streets of Istanbul, you have to notify the Governor.

A man stands in a square. That?s headline news in Turkey these days. After a sleepless weekend of clashes between riot police and anti-Government protesters, standing in a square has now become a symbolically defiant act.

Unless Turkey begins to dismantle its media autocracy apparatus, it cannot hope to be considered a modern democracy.

Gezi Park and the Kurds ? The Final Act of Turkey?s Post-Ottoman Melodrama?

The international attention given to the recent Gezi Park Protests has all but obscured another vital current in Turkish politics today, one that began in April of this year when Abdullah Öcalan, the jailed leader of the Kurdish Worker?s Party (PKK), called for an end to the Kurdish armed struggle and declared ceasefire with Turkey. Öcalan?s declaration, read in both Kurdish and Turkish, was greeted with jubilation by crowds in the southeastern city of Diyarbakir and bankers on Istanbul?s trading floors alike, and set into motion a promising step forward in Turkey and the region.