13 suspects sent to court for ?provoking riots? on Twitter in Turkey

Thirteen suspects in Turkey?s Adana have been sent to court over accusations of

The Taksim Solidarity Platform, the main organization representing the

Governor Tweets Gezi Parkers: I Wish I Were With You

?Is it true that mornings are peaceful with birds singing, linden scent and bee whizzes ın Gezi Park? I wish I were with you,? Istanbul Governor Mutlu posted yesterday morning at 5:30 am local time, addressing Gezi Park protestors via twitter

To chapul or not to chapul?: Gezi Park takes apart the power, with laughter

The ultimate impact of the Gezi Park protests

Multiple media owners can be a weakness when a government, like that of Recep Tayyip Erdoğan, wants to play rough

Turkey, with a dozen big TV stations, 50 or so nationally available newspapers and hundreds of local radio operations, ought to be a paradise of media pluralism, providing a range of coverage that underpins its democracy. No big, bad Murdochs and other overseas tycoons; just public-spirited Turkish proprietors supporting press freedoms. So why, last week, were the great angry crowds who flooded out of Taksim Square onto our own front pages painfully missing for so long on Turkish television or from the headlines of powerful papers such as Sabah?

Turkey embodies almost everything one needs to know about the Middle East. As the name ?Near East? (Middle East) was bestowed on the region by Western historians and politicians, it has a Eurocentric tinge to it. This term parts the world into the occident and the orient.

CAIRO (AP) ? Liberal-minded Egyptians and supporters of the ruling Muslim Brotherhood now share one thing: the rival sides are closely following protests in Turkey, a country that has provided the heavily polarized and increasingly impoverished Egyptians with a tantalizing model for marrying Islamist government with a secular establishment and achieving prosperity along the way

Why Erdogan Doesn’t Have A Fact-Checker

Is Turkey’s Prime Minister Tayyip Erdogan just kept lying or are his advisers constantly misguiding him?

How Europe can save Turkey

Turkey needs a real shot at joining the EU.

The ruling AKP is set to hold two mass rallies neext week as a response to the protests that spread all across the country.

#Occupygezi: The resistance is tweeted

One of the thousands of photos circulating on social media in the last couple of days in Turkey shows..

Two faces of the same story

?We are here, in the Park, in the LGBT Bloc, come and talk to us.? The message came..

I thought the government had forgotten about them, but Prime Minister Recep Tayyip Erdoğan

Turkish Prime Minister Tayyip Erdoğan has not been handling the crisis flawlessly from day one.

The notion that Turkey?s youth are apolitical has been turned on its head by the Gezi Park

?We have succeeded in five days in doing something that the opposition wouldn?t have been

‘Some people should warn us,’ says Deputy Prime Minister Arınç

By Jonathon Burch ANKARA (Reuters) – Turkish Prime Minister Tayyip Erdogan vowed on Sunday to “choke” financial market speculators who he said were growing rich off “the sweat of the people”, and urged Turks to put their money in state not private banks. Speaking at a series of rallies in the capital Ankara after a week of the fiercest anti-government demonstrations in years, Erdogan blamed a 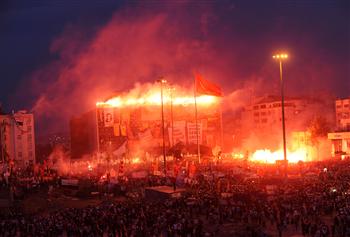 Tens of thousands filled Taksim Square, with the ultras in the forefront, to hold one of the biggest demonstrations since the beginning of the protests.

Turkish PM accused today some protesters of entering the Dolmabahçe Mosque with shoes on, however the reports had been denied by the mosque?s muezzin and imam last week.
Swoboda Harshly Criticizes Ankara This Time
Hannes Swoboda, the leader of the Socialist Group at the European Parliament, had angered main opposition CHP last month.
This time, he probably angered the government with the answer that he gave to me to harshly criticize Prime Minister Tayyip Erdogan’s response to Occupy Gezi protests.

They did it! Frustrated with the lack of in-depth international mainstream media coverage of their massive citizen protests against Turkish PM Recep Tayyip Erdogan, a group called Turkish Democracy in Action took to social media instead. They set up an indiegogo appealto raise a budget for an ad campaign.

EU foreign chief calls for engagement of officials, end of violence over protests

Ataturk, the secular reformer, has become the symbol for young Turks defying what they see as Erdogan’s reactionary reversion to the Ottoman past

Among the tents, snoozing youth and pleasant shady trees of Istanbul’s Gezi Park there are portraits of one man in a European suit. Wherever you look Mustafa Kemal Ataturk ? founder of the Turkish Republic ? gazes sternly at you. Photos of the first president hang from branches, have been affixed to tea stalls, and even encircle a giant banner showing Turkey’s prime minister, Recep Tayyip Erdogan, dressed as Hitler.

Momentous protests in Taksim Square, Istanbul, followed after police brutally crushed an environmental activist sit-in at the adjacent Gezi Park on Friday 31 May. Yet, the Turkish mainstream TV stations, including MNSBC-affiliated NTV and CNN Turk, failed to cover the protests. In terms of press freedom, Turkey ranks number 154 according to Reporters without Borders (RSF), just after Mexico and before Swaziland and Azerbaijan. At least 33 journalists are in jail, and many more have been cowered into submission by pending court cases and highly precarious contractual arrangements. RSF also labels Turkey as an “enemy of the internet” with more than 15,000 websites banned, including notably and for several months Richard Dawkins’ personal website. Turkey’s media is, by all means, one of the least free in Europe, several places behind Russia.

Turkey’s prime minister has climbed on top of a bus to give a fiery speech to thousands of his supporters, challenging increasingly angry anti-government protesters to beat his party at the ballot box after they flooded the streets for a 10th day of demonstrations.

On Sunday Recep Tayyip Erdoğan visited two cities where unrest has occurred and again condemned his detractors as a handful of looters and vandals. 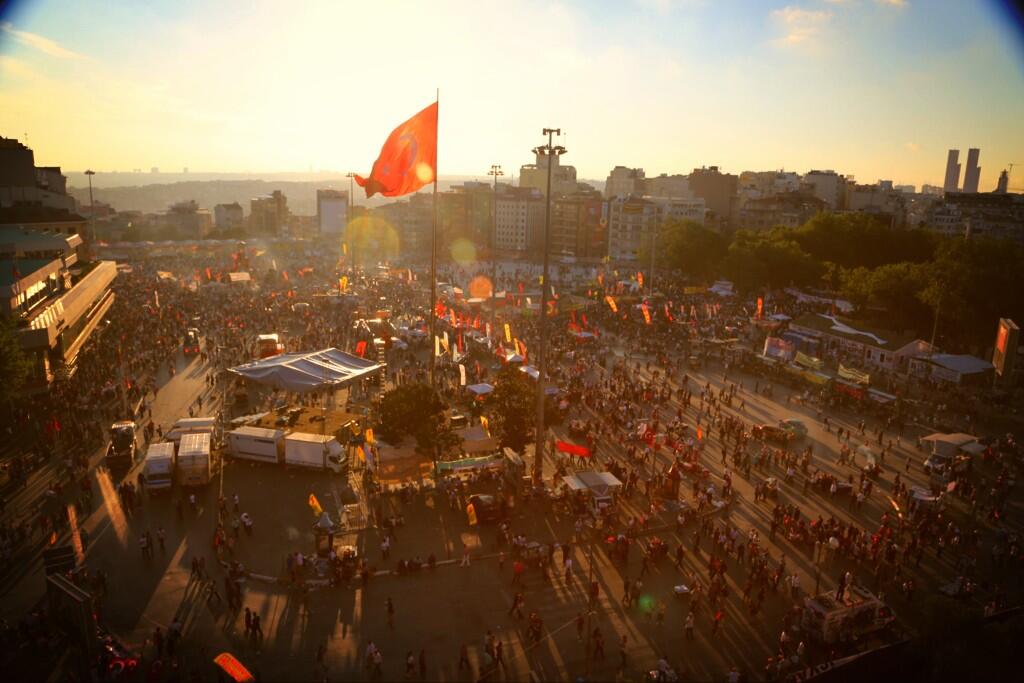 Museum instead of mall, hotel or residences at Gezi Park, says Istanbul mayor

No shopping malls will be built on the site of Gezi Park although the replica of the old Artillery Barracks could be converted into museum, Istanbul Mayor Topbaş said.
Not all Islamists are pro-Erdoğan…

Living in Taksim – Daily Report June 7, 2013
Long, long day. And not just one, but two speeches by RTE (the PM). Luckily, I managed to miss them both. His first speech was at the airport, upon his arrival from Algiers via Ankara. First the AKP announced that they didn?t want an audience then I guess they changed their mind. Thousands of SMSs were sent inviting people to the airport, free bus services were arranged from all around the city, and the metro line to the airport was kept open until 4 AM. Normally, the metro shuts down at midnight. During the first few days of the protests, metro service to Taksim was stopped altogether. Let alone free bus rides, traffic was diverted away from Taksim. People came anyway.
Ankara?s ?chapulling? draws heavy-handed police response
Ankara residents? brief respite from tear gas ended June 8, as thousands of ‘chapullers’ were beaten back by a crushing attack from the city?s police.
The Fight for the Soul of Istanbul
PRI’s The World
Bozdogan is a Turkish-American architectural historian, who teaches at Harvard and at Bilgi university in Istanbul. ?The protests are larger than just the park,? she says. ?I think it is a protest in general about the larger neo-liberal agenda of this
Turkish Activists Bring Humour, Creativity to Social Media
Independent European Daily Express
According to Asl? Tunç, head of the media and communications department at Istanbul Bilgi University, social media helped give a platform to opposition voices in Turkey that were growing online, even before the protests began. “This didn’t happen
Claims of coming police raid at park might be provocations: Governor
The Istanbul governor urged calm following claims that police are planning a raid at Gezi Park.

How #OccupyGezi could transform Turkish society

A study by Bilgi University surveyed 3,000 #OccupyGezi protesters in a matter of 20 hours. The study concluded that 70 per cent of the protesters have no party affiliation. Similar percentages are first time protesters and the main reason people have

Highlight of the day,rather, frustration of the day: PM declared in Algiers that they ?will build the barracks.? No understanding, no empathy, no reason. Luckily, the stock market went downhill after his declarations; that?s the only thing left that might convince him that he?s doing something wrong. He?s back in Ankara as of tonight, was supposed to land in Istanbul by 11 PM, but they keep on delaying it. The Interior Minister gave a speech full of blatant lies. Claimed no police attacked the Swan Park in Ankara, and when people pointed out that was untrue, he claimed that they had it wrong. OK? He also claimed that the injured young man who fell off the construction site of the cultural center the other day was pushed by the protestors. If he could only come to Taksim, he would see how people apologie to one another even if they push each other by mistake ? this isn?t just a lie, it?s slander in its worst form. But this is the man who was the head of Istanbul Police Force when Hrant Dink was murdered. Enough said.