As the 9th day of Gezi Park demonstrations coincided with the Lailat al?Mi?raj, protestors decided to mark this religious event through several activities.

Over 4,100 people have been wounded and two people.
Turkish group demand police chiefs? sacking
Newly formed movement of protesters meets with deputy prime minister to demand senior officials be dismissed and a halt to use of tear gas

The Ankara police changed its intervention in protests June 4 following the messages of restraint..

A majority of the Taksim Gezi Park protesters do not feel close to any political party and have. 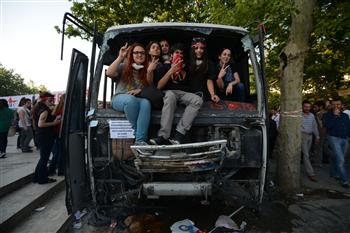 Neither Turkish spring nor velvet revolution

A media that does not function as a check on the government will not be able to survive in the coming days and people will definitely question business relations between the media and the government.
When Turkish food and protests collide

Care for a side of red hot chili peppers and ironic social commentary with your protests? The photo that went viral this week of a policeman pepper-spraying a young woman in a red dress in Istanbul inspired a response from an unlikely place: the food section, Fork & Cork, of the Hurriyet Daily News.

It’s hard to believe it all started over a park.

With tens of thousands of Turkish citizens laying claim to the streets of Istanbul and several other major cities,

The anti-government protests last weekend demonstrate that a move to a more consensus model of government is needed to avoid conflict in the country.

In majoritarian democracies decisions are determined by a simplemajority/plurality of voters while in consensus democracies by ?as many people as possible?. Both options claim to foster moderation and effective decision-making either by privileging single-governing parties as in Turkey or by encouraging wider consensus and cohabitation in government of competing political forces as post-election coalition partners.

World leaders don’t always have the liberty of choosing their allies, but they do get to pick their friends. And while Barack Obama has been criticized for hisVulcan-style diplomacy, the U.S. president has made a few buddies in office.

The Turkish town of Cankiri, with seven voters out of 10 being faithful to the ruling party AKP, shows prime minister still commands popular support
Contesting neoliberal-Islamic authoritarianism in Turkey

Two years ago a sociologist at Stanford published a study which found that, concurrent with the widening division of wealth in the U.S., the standardized testing gap between high-income and low-income students had grown 40% to 50% since the 1960s.  Since the education gap between blacks and whites is a common theme in left literature, it is worth noting then that the achievement gap by income is now nearly twice as large.  Setting aside the moral questions raised by such a discrepancy, it merits serious consideration from a policy standpoint given the negative impact it has on the national economy. A McKinsey report published in 2009 showed that closing the income achievement gap from 1983 to 1998 would have increased GDP in 2008 from $400 billion to $670 billion.

“openDemocracy” focuses on the eruption of protest in Turkey; “New Humanist” slams multiculturalists for their complacency while “Soundings” sees multiculturalism flourish in Britain; “Blätter” suggests that the winners should be made to pay; “Osteuropa” discerns in Orbán and Putin the negation of 1989; “Springerin” shines a spotlight on the affinity of art and process; “Merkur” is amused by the rise and foreseeable fall of International Art English; “Dziejaslou” travels to Sweden; and “Letras Libres” talks to a fuming and culturally conservative Marc Fumaroli about money and culture.

Millions of Turkish citizens have been outraged by the violent reaction of their government to a peaceful protest aimed at saving Istanbul’s Gezi Park.

There are two aspects of possible changes in the political balances that are likely to be triggered.

From Tahrir to Occupy to Istanbul: An Anatomy of Current and Future …
By Brian Merchant ()
Neither Occupy Wall Street nor the gathering in Tahrir nor, certainly, Mohamed Bouazizi’s self-immolation in Tunisia nor the upheaval in Istanbul were pre-organized to be major events. A small group of proto-Occupiers strategized some in

Thousands of people bid adieu to Abdullah Cömert, a Gezi Park resistance demonstrator who was killed in Hatay Resistance. Following the ceremony, police attacked the funeral crowd with pepper gas.

AKP is losing international reputation it built since 2002

It would perhaps be too much to compare ongoing popular uprising in Turkey with the Arab Spring movement.
When Gezi incidents coincide with global fluctuation
Financial markets in Turkey began the week with a historic fall. It would be a mistake to conclude that

It is all about Erdoğan

Last Sunday, while Istanbul was being shaken by clashes between unarmed protestors and tear-gas-trigger-happy police..

The Battle of Taksim and beyond

All in all, it looks like Prime Minister Erdoğan?s ambition to raise sin-free, all sober and devout generations..

What Did the Gezi Uprisings Mean?

I wrote a piece for CNN about Turkey?s uprisings. You can find it here.

So what are the issues?

Invasion of privacy: Just as pious Turks once were incensed by restrictions on Islamic expression and wearing of headscarves in certain public places and on other personal expressions of piety, Turks today are enraged by government intrusions into their private lives, what they should wear, what they should drink, and what they should do with their bodies (for instance, government urging that women should have three children and stay at home, and fiats restricting abortions and Caesarian section) and the increasing arrogance of AKP supporters in demanding that only their norms be represented in society (confronting men and women kissing in public or strolling in a park together).

LONDON (Reuters) – Turkey’s president and the country’s international trade group sought to reassure foreign investors that the days of violent anti-government protests should not scare away multinational firms. Turkey’s location as a gateway between Asia and Europe and its young, skilled, talent pool have attracted a growing number of multinationals to place their regional headquarters there

He’s perhaps the most powerful and popular politician Turkey has seen in generations. But Prime Minister Recep Tayyip Erdogan may also be the most polarizing.

Turks have many reasons to take to the streets, and the anger and resentment that is fueling the country?s ongoing protests has many sources. Secularists are speaking out against Islamists. Leftists are bucking conservatives. Middle-class Turks are rallying against the relentless development of central Istanbul. Many young people simply want to save the trees in Gezi Park, the small green space where the protests began last week. And the majority of protesters are just happy to be raising their voice against Prime Minister Recep Tayyip Erdoğan and the ruling Justice and Development Party.

The Turkish Foreign Minister has reproached his U.S. counterpart over four different statements.

Kayseri is a religiously conservative city which votes overwhelmingly for the ruling party, AKP. Here’s a protest in Kayseri.:

Inside the People?s Republic of Taksim

Istanbul’s police chief had said his forces would only use teargas as a last resort. But the images seem to show the officer targeting an unarmed woman.

Erdogan Has Been Warned

Turkey?s prime minister should heed the message of protesters and critics within his own party: don?t overreach and listen to the voices of all citizens.
It Takes a Quiz Show Host: #Occupygezi and Culture Jamming aganist CensorshipTurkey

I?ve written about the abject failure of Turkish media to adequately cover the news of the most important protests in the country since the 1980 coup. Many media outlets aired irrelevant documentaries and talk shows (talk show about legal definitions of theft, cooking shows, dolphin training, etc) while clashes spread to dozens of provinces and many neighborhoods in many major cities.

Turkey’s deputy prime minister has offered a partial apology for the vicious police crackdown on protesters in Istanbul, in an apparent attempt to cool tensions after nine days of anti-government rallies across Turkey.

One of the major acts of resistance for protesters occupying Gezi Park was to read a good book. A library has now been created with the support of publishing houses.

The thousands gathering spontaneously in Taksim Square do not have an ideology. What they share is a sense of grievance

Beneath the trees of Istanbul’s Gezi park, a group of students was debating the tumultuous events of the past six days. Their unprecedented protest against Turkey’s prime minister, Tayyip Erdogan, wasn’t exactly a revolution, they agreed. So what was it: an awakening, a renaissance or a citizen’s revolt?

The protests sparked by outrage over the demolition of a park in Istanbul recall the Occupy protests in the West, says Abdullah Gül.

Erdogan still a hero to some, in spite of violent protests

A stone’s throw from Taksim Square in the poor district of Kasimpasa, people still sing the prime minister’s praises

Recep Tayyip Erdogan, Turkey’s prime minister, might be looking rattled following days of protests demanding his resignation. But at Kardesler Berber, a small barber shop in the conservative neighbourhood of Kasimpasa, Hayri Göz is having none of it.

?This is not about a Park? by Ayşe Ezgi Gürcan

In the 8th day of the occupation, the Park has already turned into a small campsite with its make-shift infirmarie

?Some implications of the Gezi protests? by Dr. Mark Meirowitz

Turkish PM Erdoğan, who faces mass protests in Turkey, an honorary doctorate from the University of Algiers as a reward for his ‘contributions to humanity.
Muslims and Models

Not two weeks ago I was at a conference in Istanbul where the philosopher Seyla Benhabib mentioned the growing public disaffection with plans to give over Gezi Park to yet another project for private profit. Her prescient invocation of this issue was made in the context of a discussion about the ?Arab Spring? as a victory for Islamists, and the possible success of a ?Turkish model? for their new regimes. I pointed out that one of the problems of such a discussion had to do with the idea of modularity, which has become a category of neoliberal thinking that brings Western ?experts? together with their Islamist subjects in an ironic if telling unity. By the same logic we can now claim Egypt as a model for Turkey in a circular and meaningless cycle of comparisons.

Turkey, from Tahrir to Taksim

Kerem Oktem explains why the occupation of Gezi Park in Istanbul?s Taksim Square quickly turned into an enormous eruption of protest; the key factors being an increasingly uninhibited neoliberal development process, the government’s growing conservative zeal and a troubled foreign policy.
The Symbolic War at the Heart of the Gezi Park Protests

This is a fight about trees ? or so it seemed at the end of last week. The protests first came to the attention of the world through this image. Before journalists had cobbled together their copy, or before their editors had decided that events warranted any, Reuters photographer Osman Orsal?s photo of policemen firing pepper spray at close range in the face of a young girl acted as a widely-shared placeholder for the torrent of analysis that was to follow.

Key milestones of anti-government protests in Turkey that first erupted last week over the plans to redevelop a park in Istanbul.