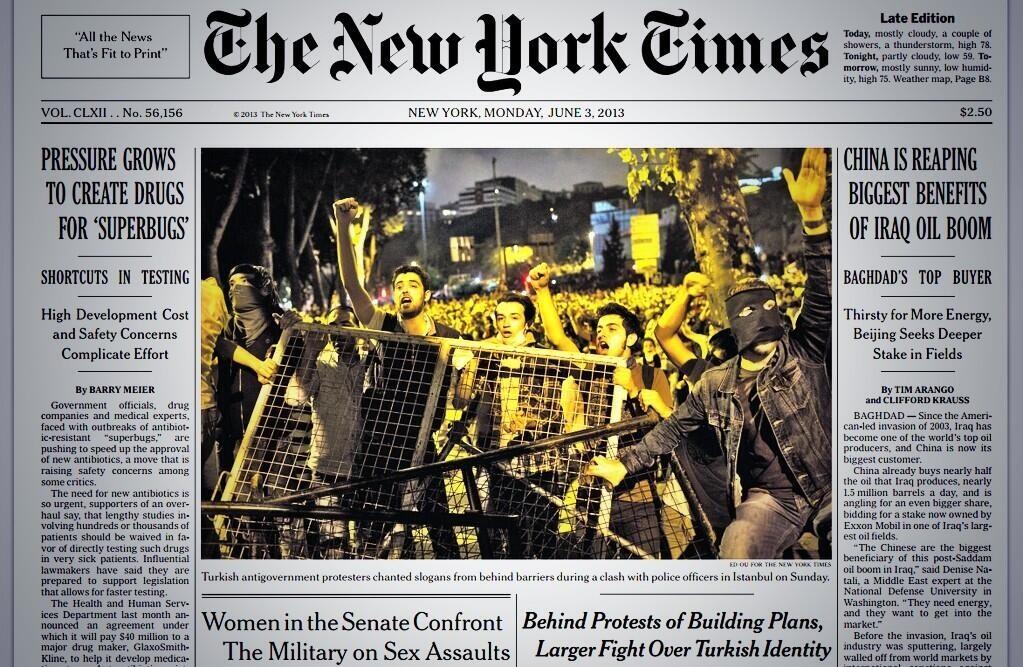 A gallery of Resistance Humor here.

A gallery of how civic this Resistance is here.

The initial reaction against the demolition of a park in Istanbul?s central Taksim.

Turkey must conduct a far-reaching, independent probe on its security forces’ treatment of anti-government

Opposition to Prime Minister Recep Tayyip Erdogan isn?t about a park. It?s about a power grab.

What’s causing the protests in Turkey?

What started as a peaceful sit-in to protect one of Istanbul’s last public parks has escalated into nationwide protests. But why are people protesting and what’s causing the continued unrest? Share your story in the comment thread below.

The main opposition leader Kemal Kılıçdaroğlu defended the freedom of the social media..

Frustrated by the relatively sparse coverage of recent demonstrations in the Turkish media, supporters of the protest movement have turned to social networks to share images of police officers using force.

In Turkey, peaceful protests in a declining democracy

Peaceful protests in Turkey against the increasingly authoritarian rule of Erdogan’s Islamic-based party are a needed corrective, not a revolution. They show a fearless, tweet-oiled, even leaderless uprising to save democracy.

Kuğulu Park?s swans evacuated due to tear gas in Ankara

Swans in Ankara?s Kuğulu Park that have been affected by police tear gas amid the ongoing Taksim Gezi Park

ISTANBUL, Turkey, June 4 (UPI) — A person was shot in the head and killed in anti-government protests Turkey’s prime minister blamed on those “hand in hand with terrorism.”

ABC News’ Alex Marquardt reports that these are the most violent demonstrations in years.

The nationwide protests in Turkey started with the story of the people who lay down in front of the bulldozers to resist the destruction of our open spaces, the drying of the streams and the felling of the forests.

The government at the edge of its power

The slogan ?Government, resign? chanted during the ?Gezi Park Rising? should not mislead anybody

Sipping her bloody merry in a coffee shop in the posh Nişantaşı neighborhood, close to Taksim Square.

Erdoğan fails to get the point, Gül does

US, Germany warn their citizens about potential violence in Turkey

The U.S. Embassy to Turkey has issued a warning to its citizens in Turkey about

By CNN.com staff (CNN) ? What started as a peaceful sit-in over plans to demolish a park in central Istanbul

Prominent Turkish academic Ahmet İnsel said on the night of June 3 that he knew a young boy.

Releasing a statement at Gezi Park in downtown Istanbul, Taksim Solidarity group declared that they were against Topçu Barracks or any building that would harm the park, and demanded all detainees to be released.

Turkey: a protest worth heeding | Editorial

From micro issues to large ones, the common denominator is Mr Erdogan’s and the AKP’s overbearing personality

There are many ways of reacting to the scenes on Istanbul’s streets, if you happen to be the prime minister of Turkey. You can send in the riot police, and fill those streets with tear gas. You can denounce Twitter, and hope that no one observes that your aides tweet too. You can blame the opposition. Or you can ask yourself questions: what makes a localised and relatively peaceful campaign to save an inner city park balloon, in just a few days, into a national protest that has spread to half of Turkey’s provinces ? And why is this urban revolt happening to a leader who has won three elections, each time by an increasing majority?

Prime Minister Recep Tayyip Erdogan on Monday said his political opponents were behind the violent demonstrations that have convulsed several Turkish cities.

Turkish Prime Minister Recep Tayyip Erdogan?s woes are looking positively Byzantine at the moment. Back in 532, Constantinople faced what would become one of the worst popular revolts in history: The Nika riots burned down half the city, left tens of thousands dead, and almost led to the ouster of Emperor Justinian?and it all started over something as relatively benign as chariot racing-inspired hooliganism.

Turkey?s protesters have been let down

The protests began initially over the fate of Taksim Gezi Park, one of the last significant green spaces in the centre of Istanbul. The heavy-handed response of the police, plus the increasingly authoritarian agenda of prime minister Recep Tayyip Erdogan and his government has fuelled the protests.

?Turkey?s Youth Have Had Enough?

Spiegel Online (Germany) 3 June 2013 Charly Wilder With violent protests against the government of Prime Minister Recep Tayyip Erdogan continuing in Turkey, both the US and Europe have called for calm. The demonstrations ? and the government?s brutal response ? pose one of the greatest challenges yet to Erdogan?s decade of power, say German

Turkish Protesters Coming to the Aid of Fallen Police in Kizilay (imgur.com)

Why we need to raise our voices (OC) (imgur.com)

Even Edison regrets.. (referring the logo of AKP)