Democracy is not just about elections, says Turkish President

Turkish PM gets into row with Reuters reporter over Taksim protests

Turkish protesters turn a mosque into a sickroom in Istanbul

Turkish protesters clashed with riot police into the early hours of Monday with some setting fire to offices of the ruling AKP as the fiercest anti-government demonstrations in years entered their fourth day.

Top news: Protesters continued to clash with police overnight in Istanbul, where angry residents threw rocks and put up makeshift barricades as police deployed water cannons and tear gas to disperse what is proving to be a resilient protest movement.

The government?s insistence on ignoring widespread demands to put an end to the brutality against ongoing protests.

Turkey’s prime minister on Sunday rejected claims that he is a “dictator,” dismissing protesters as an extremist fringe, even as thousands returned to the landmark Istanbul square that has become the site of the fiercest anti-government outburst in years.

Anonymous declares #OpTurkey, attacks govt websites in support of protests
RT
The hacktivist group Anonymous has taken down the Turkish President’s website, along with that of the country’s ruling party, as operation #OpTurkey kicks off in support of the anti-government protests that have entered their fourth day.

Turkey suffers worst night of rioting
Protesters use mechanical digger to break through police lines as riot squads battle back with volleys of tear gas
War and Peace in Turkey: From the attack on Syria?s border to the PKK?s retreat
In the same week in which Turkey watched on with hope at the initial phase of the withdrawal of PKK soldiers across the Iraqi border, two bombs explosion went off in the village of Reyhanli, located on the Syrian border, once again evoking fear throughout the nation. These explosions happened exactly on the opposite side of the southern border of Turkey, in the Hatay region.

Istanbul Protests Through the Eyes of a Ukrainian Journalist

Turkey has long been a popular vacation and business travel destination for hundreds of thousands of Ukrainians, but few of these visitors can boast much knowledge of the Turkish politics. Now, however, as the anti-government protests and police brutality in Turkey are making top headlines globally, many Ukrainians have started to follow the situation there with much interest, expressing support and admiration for the peaceful protesters, noting similarities with the 2004 Orange Revolution as well as with more recent events in Ukraine, and wishing for the political awakening of the Ukrainian people.

Turkish Prime Minister Recep Erdogan has blasted Twitter and social media in general for spreading rumors and ?lies? this weekend as police clashed fought with protests in Istanbul and other cities. Erdogan went so far as calling social media ?the curse of society today?.

The voice of Turkish protesters has been heard | Binnaz Saktanber

It started out small, but has taken on a life of its own. Last Monday, a handful of peacefulprotesters occupied Gezi park on Taksim Square, one of the few green spaces in Istanbul, in protest against plans for its redevelopment into a mall. They were having a sit-in, reading books, planting trees to replace those already ripped out by municipal workers. On Wednesday, the police attacked them with teargas and burned down their tents. Elsewhere in the city, the prime minister, Recep Tayyip Erdogan, was announcing plans to push ahead with a third Bosphorus bridge despite the critical response to the project by environmentalists.

The metamorphosis of the Occupy Taksim protests has been giving signals in the recent months. 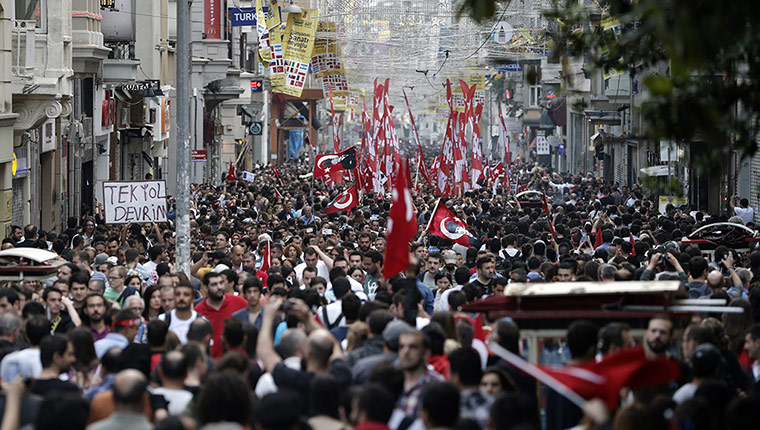 It is tempting to commentators, when it comes to Turkish politics, to reduce issues along a dichotomy of the religious and secular. Soon after the eruption of the Gezi Park protests, defenders of the protests? plurality were quick to point out headscarves in the crowds ? supporters of the government, meanwhile crowed about the Taksim demonstrators? consumption of alcohol. Reporting by one colleague suggests that these protests may have broken down these barriers, that the Gezi Protests may embody a new consensus in Turkish politics

Hundreds of people were injured during demonstrations against Prime Minister Recep Tayyip Erdoğan’s government in Istanbul and other Turkish cities on the weekend. The protests began around a week ago with demonstrations against a construction project in the centre of Istanbul. Many Turks have had enough ofErdoğan’s authoritarian leadership, commentators write, and call for the prime minister’s resignation and new elections.

Why the Turkish Protests are No Surprise

During the last few days, I?ve heard many people talking with surprise about the protests in Turkey. I have also been repeatedly told that all analysis and policy briefs indicated that Turkey is the perfect model for any country that chooses the middle road between a Muslim state and a democratic one. I disagree and am surprised to hear these reactions.

Turkey’s Erdogan dismisses protests: ‘What is the message?’

As his country experienced the fourth day of street protests against his administration, Turkish Prime Minister Recep Tayyip Erdogan today dismissed the demonstrations, shrugging off comparisons to the Arab Spring and other movements that have shaken Turkey’s Middle Eastern neighbors.

Several prominent Turkish universities have announced the postponement of university.

Preserving Istanbul?s Soul, One Bite At a Time 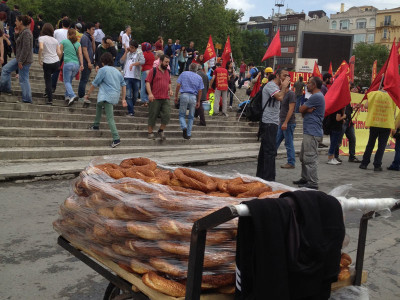 We generally prefer to keep our nose in a bowl of soup and out of the political arena, but over the weekend, Istanbul?s politics seeped through the cracks in our windows, in the form of teargas and general mayhem. As longtime foreign residents of Istanbul, we?ve found it relatively easy to steer clear of political activity, but every so often it barges into our homes and turns our stomachs.

A Socialist Solidarity Platform (SODAP) member has been hit and killed after a car driver..