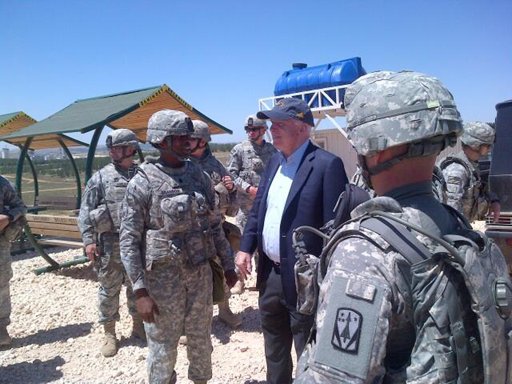 U.S. Senator John McCain (R-AZ) is pictured with U.S. troops at a Patriot missile site in southern Turkey on May 27, 2013 in this picture released via McCain’s Twitter account. McCain, a former Republican presidential candidate and one of the loudest voices calling for military aid to the Syrian opposition, met with some of the rebels during a surprise visit to the war-torn country on Monday, his spokesman said. SSenator JohnMcCain/Handout via Reuters

The European Union is ready to assist Ankara in the ?courageous peace process? that..

Soon after the rise of the Justice and Development Party (AKP) in 2002, Turkey launched an ambitious foreign policy agenda to make itself a stand-alone regional leader. With this new vision, Turkey looked to cast itself as a central actor, wielding soft power to shape the Middle East.The Syrian war and Iran?s regional hegemonic designs have, unfortunately, stunted most of Ankara?s ambitions.AKP

Euxeinos (GCE-HSG) 10/2013, pp. 7-15 Issue: Strategic Depth through Soft Power: The Domestic Production and International Projection of Turkish Culture by Selcen Öner * During the Cold War era and in the 1990s as well, Turkey was considered mostly as a ?hard power? because of the high influence of its military in politics and deficiencies

Hallelujah! I can technically become Turkey?s undersecretary for foreign affairs

Turkey likely to move ahead on EU path in June

BRUSSELS (Reuters) – Turkey is likely to take a long-awaited step on its path towards European Union entry next month, EU officials said on Monday, after France eased its opposition to Ankara’s accession talks. Turkey’s EU talks have ground to a halt in recent years, in part because of opposition from France, as well as because of an intractable dispute between Ankara and Cyprus. But relations .

EDAM Discussion Paper Series, 2013/5, 2 May 2013, 22 p. Can Kasapoğlu & F. Doruk Ergun * This study was designed as an ?introduction to the Syrian battleground?. The paper is planned to answer two main questions as follows: (1) What are the ongoing conflict?s major determinants; (2) and how can they shape possible trajectory

With a war raging next door, Turkish commerce improvises

The Washington Post (USA) May 25, 2013, p. A1-A7 By Kevin Sullivan, Iskenderun (Turkey) Sea ferry lets 18-wheelers avoid Syria?s carnage. The Nissos Rodos, a 630-foot ferry, once cruised the Greek islands, moving tourists from one sunny paradise to the next. Business dried up when the Greek economic crisis hit three years ago. But then

The American-Russian-Turkish Triangle and the Civil War in Syria

INSS Insight (Institute for National Securities Studies) No. 431, May 27, 2013 Mark A. Heller * Ex-empires may all be equal, but some are apparently more equal than others. Since he became US Secretary of State in February 2013, John Kerry has met with Turkish Foreign Minister Ahmet Davutoglu four times. Only one other foreign

Turkey has more to do for upgrade: S&P

Standard & Poor?s is going to review Turkey?s credit rating within the year..

Ankara quickly rejects a tentative proposal from the European Union on accession negotiations.

With international pressure mounting regarding their participation in an upcoming peace conference.

A video dating back to eight years ago, which shows images of two Turkish diplomats on duty in Iraq speaking