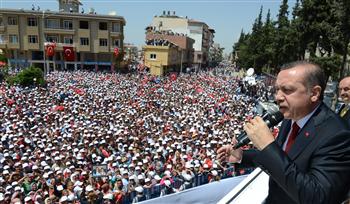 ‘Those who seek to preserve their dictatorship disrupted our peace’, Turkish PM says in Reyhanlı

During his Reyhanlı visit, Turkish PM Erdoğan accused al-Assad of being involved in the bombings

Bumps on Erdoğan?s road to presidency

It seems 2014 will be a busy year not only for Turkish politicians but for Turkish voters as well.

Sitting in front of a small stone cabin on top of a hill overlooking green valleys, with the snow-capped Hakkari mountain range in the background, two men in camouflage uniforms are busy making tea. An AK-47 leans against the wall.

Would Prime Minister Recep Tayyip Erdoğan be able to pass the presidential system in Parliament.

What Next For The PKK?

Sebahat Tuncel has written an overview of the current state of the process of rapprochement between the Turkish government and the PKK (here) and the position taken by various groups, parties, and actors vis-a-vis this process. This is an important process for Turkey and for the region, but is fraught with the possibilities for wrong steps and failure. To help the process along, Tuncel suggests that international powers that, she writes, have meddled in these affairs before, should now step up to the plate and help solve them:

However it might be put, perhaps thanks to the ruling Justice and Development Party.

Parliament?s General Assembly was set to debate a motion of censure

No problem in PKK pullout: BDP

There are no problems or obstructions regarding the withdrawal of the outlawed Kurdistan Workers? Party.

(The author is a Reuters Breakingviews columnist. The opinionsexpressed are her own) By Una Galani DUBAI, May 21 (Reuters Breakingviews) – The modern face ofTurkey’s largest city and financial heart is on full display toanyone sitting on the open-air terrace of a trendy upscale caféalong the Bosporus in Istanbul. Carpaccio and wine are served,as house music contends with the call to prayer from

Turkish PM sues opposition leader for one million in compensation