Turkey’s EU Minister Egemen Bağış has indicated that the National Socialist Underground trial could be used to exculpate the neo-Nazi image haunting Germany. 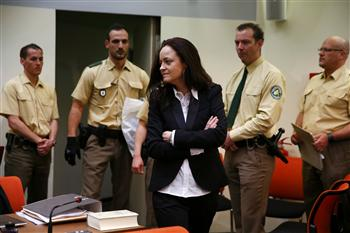 Trial Begins for a Neo-Nazi Suspect in Germany

The trial of the extreme right wing terror cell NSU at Munich’s upper regional court was adjourned and postponed to next week just a few hours after it began on Monday. The reason for this was several complaints presented by the defence lawyers alleging that the judges were biased. Some commentators hope that the trial will help Germany to deal with these right-wing extremist crimes. Others warn against expecting too much of the trial.

An appeals court in Italy upholds the conviction for tax fraud of former Prime Minister Silvio Berlusconi, and reinstates a four-year prison sentence.

A day before Europe Day (9 May), held yearly to celebrate the peace and unity in Europe, 3,500 staff of the European institutions held a strike against budgets cuts that may see their salaries cut by 60% over the next 15 years.

At the end of its yearly plenary assembly in Budapest the World Jewish Congress (WJC) called for right-wing extremist parties to be banned across Europe. Some commentators demand that the EU take stronger action against Hungary’s right-wing conservative government, which tolerates anti-Semitism. Others say it’s unfair to indiscriminately accuse all the conservatives in the country of hating Jews.

A political settlement to the Cyprus dispute is no longer just a romantic fantasy; it may be the only way out of the country’s current economic crisis.

from Ideas on Europe by Jon Danzig

Trial forces Germans to look at role of minorities

International Herald Tribune (USA) Tuesday, May 7, 2013, p. 3 By Melissa Eddy, Munich She smiled, chatted with her lawyers and repeatedly flipped her carefully styled hair back from her face. On her first day in court on Monday, the woman whom the country?s tabloids have dubbed the « Nazi bride, » or simply a « monster, » looked

A social Europe must be a political Europe

My dear Etienne Balibar, in a recent article you explain how a new Europe can only come from the bottom up. But how would this shift from top-down to bottom-up work, and what does it even mean?

The Spanish prefer to describe themselves as picaresque or roguish, but the arrogance of the rich and endemic corruption in post-Franco Spain is changing attitudes.  Liz Cooper says that volcanic change is on the way

Thousands are to protest in France on Sunday to mark President Francois Hollande’s.

Yesterday I noted down a few thoughts from reading the fourth of the European Federalist Papers. Today I want to pay my respects to the Federal Constitution of Europe blog, written by a Citizen of Europe since 2009.

Social Europe: “The Erosion Of Europe” by Joschka Fischer

Just weeks ago, the worst of the financial crisis in Europe seemed to be over. Stability seemed to be returning. But appearances proved to be deceptive. A minor problem (at least in scale) like Cyprus, when combined with an almost unbelievable degree

The role of Nigel Farage?s party in UK politics is still more psychological than psephological, but it drag its rivals rightward

Around three months after the French President François Hollande?s decision to stop paying ransoms to hostage takers, the Moulin-Fournier family were finally released, to the immense relief of their family and friends. However, there is still no information to shed light on how this liberation occurred.

Twists ahead for Italy?s left-right coalition

Brussels asks how Italy plans to finance about ?10bn in proposed tax cuts and rise in social welfare spending without derailing fiscal commitments

Self-Immolations in Bulgaria ? an Intertwined Personal and Social Trauma

from Ideas on Europe

UK Independence party has stamped its image on British politics in a manner comparable to populist, anti-establishment movements across Europe