PKK?s withdrawal to start as of April 25, following statement from senior figures in Kandil: BDP deputy

The withdrawal of PKK militants from Turkish soil will start April 25..

The outlawed Kurdistan Workers? Party (PKK) will soon start to withdraw from..

Turkey?s recent Kurdish opening: opportunities and the challenges ahead

The opportunity for a peaceful settlement of Turkey’s Kurdish question came as a surprise to many observers, announced as it was in the middle of a period of growing tension. But despite support by both parties, ambiguities that could undermine the whole process subsist.

The withdrawal of PKK militants from Turkish soil may sta 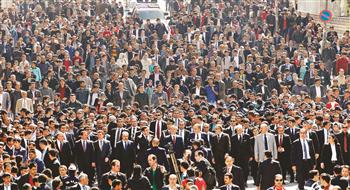 Turkish President Gül walks with a huge crowd in the eastern Turkish province of Muş before having a tea break, marking a first ever state visit in 29 years. AA photo

Erdogan: Opposition parties in Turkey will fade away

AKP administration appointed its share of members for the resolution commission, a parliamentary delegation that will investigate means of social peace and determine on the resolution process in Turkey’s Kurdish problem.

Investors flock to east in hopes of Kurdish peace

Fresh hopes for a peaceful solution to Turkey?s Kurdish issue have attracted investors? attention to the eastern and southeastern provinces.

Turkish President Abdullah Gül was welcomed by a large crowd during a visit yesterday to the eastern province of Muş, a first by a Turkish president in 29 years.

Ayşen Uysal, an associate professor of Public Administration at Dokuz Eylül Üniversitesi, said that CHP started adopting a nationalist tone as its party leader Kılıçdaroğlu was convinced by the nationalist wing.

Turkey?s agenda for peace aims to overcome the decades-old Kurdish question and raise democratic standards. While welcoming this initiative, Yakin Ertürk questions whether the end of conflict will bring peace to women if gender equality issues are not adequately addressed

There are 13.4 million Kurds living in Turkey, representing 17.7 percent of the population.

Turkey?s opposition is failing to match the government?s constructive attitude toward pursuing peace