Cyprus reaches end of a long and sleazy road

The collapse of the Cypriot economy is not the result of a random lurch or shift in axis. It is the end of a path traced in a long, complacent arc of ease and sleaze

from Ideas on Europe by Osmi Anannya

The troubles of France’s President Hollande

How far will the French tolerate cuts by Hollande?

Stateless in the UK: amid the chaos, a groundbreaking step forward

New immigration rules in the UK designed to help stateless people come into force at a time when legal aid has been removed from nearly all immigration cases. With little or no access to legal aid, how far will those who are stranded in the UK really have a chance to rebuild their lives?

The politics of sexual harassment in Spain

A scandal related to women?s rights and the socialist party in Spain, PSOE, broke out last month on International Women?s Day. Liz Cooper looks at a case of sexual harassment by politicians at work that is at the heart of the current row in the PSOE.

So Cameron starts a charm offensive across the EU

A majority of the French favor a government reshuffle in the aftermath.

French President François Hollande attempted on Wednesday to limit the damage caused by the affair over the unreported earnings of former budget minister Jérôme Cahuzac. In future, new laws are to ensure the public disclosure of politicians’ incomes and prevent officials who have been found guilty of corruption from returning to office. But such reforms are worthless as long as patronage networks hold sway and politicians fail to meet their responsibilities, commentators write.

Hollande?s authority move to raise standards is overdue as his waning authority has been further weakened by the disgrace of trusted lieutenant

We should recognize that the national context and legitimacy is here to stay for some time. We might overcome it one day, but not tomorrow. We therefore need to develop a new approach that allows for combining the national more legitimately and more democratically with the European. 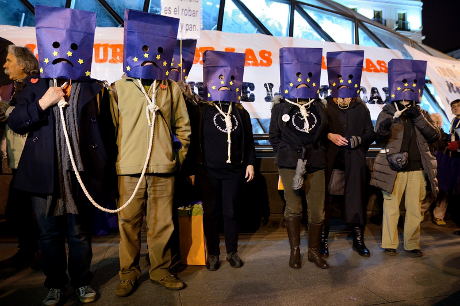 The French president is said to be committed to reforms to restore the country?s fiscal health, but his immediate priority is to douse a political fire

Bottom up? to Europe

A currency devoid of matching political institutions becomes a promising prey of the markets, led by financial interests, including many traditionally hostile to the euro and to the prospect of any further European integration. What to do?

Is Sikorski in with a chance of being the next EU foreign minister?

Some critics argue that Croatia is not ready for an EU accession because of its national conflicts, its economic and political weakness. Minority Rights, Solidarity and inequalities are the key issues worth to examine in this regard.

Five Star Movement, which holds balance of power in a divided parliament since inconclusive elections six weeks ago, shows signs of splintering

The minor steps the UK government has taken or promised will do little to convert the EU referendum and Brexit brigade at home (or the secessionists abroad), but they strengthen the case of those who see that European level democracy and accountable government have to be built on the eurozone, which needs full representative democracy, functioning government, robust rules, good governance, accountability and transparency

Britain has marginalised itself on an EU legislative dossier for the second time in a matter of weeks. Why?

from open Democracy News Analysis – by Will Davies

Wander into post-Olympics East London, lift your gaze, and what do you see? The awful warning of late-Soviet homogenisation.

Trying to understand a report I have not seen? The European Report on Development

So the European Commission and 7 Member States finance and commission a European Report on Development. There have been three of them so far (details here), and the latest one ? entitled Post-2015: Global Action for an Inclusive and Sustainable Future will be released on Tuesday next week. There?s apparently a launch event about it happening in Brussels, with Commissioner Piebalgs speaking at it (3rd item here), although where and exactly when this will happen is a mystery still, and I do not think it is live streamed.

Italy wants change. But the time hasn’t come yet

The last elections have shown that voters demand the beginning of a new political season. Unfortunately, what’s happening in the aftermath is the exact opposite.

Fouskas and Dimoulas look at the bigger picture surrounding the Greek Cypriot crisis, as economic contraction reaches levels not seen since the Turkish invasion. Meanwhile, external economic and geopolitical interests leave little prospect of European politics furthering the cause of integration.

Some key data about bond purchases by Bank of Cyprus – now the focus of a controversial EU-IMF bailout – is missing, investigators find.

Passos Coelho: ?We will have to introduce important cuts in expenditure on social security, health and education. We need to do everything possible to avoid a second bailout?