Full disclosure: Microsoft releases and breaks down government requests for user data the world around

from EFF.org Updates by Adi Kamdar and Adi Kamdar

Thirty-seven digital rights groups and businesses have come together this week to urge the White House to defend privacy and promise to veto the dangerous cybersecurity bill CISPA. Such legislation poses a number of privacy risks to individuals, allowing levels of information sharing between companies and the government that supersede existing privacy laws. Privacy advocates aren’t the only ones speaking out against CISPA; online companies like Reddit and Mozilla, as well as web hosts like Gandi and Namecheap, have chosen to stand up for their users’ rights rather than support ill-defined legislation.

Don’t Hate CISPA ? Let’s Fix It, Because We Need It

?Cybersecurity and privacy are not mutually exclusive.? Yet that is the false choice being presented by CISPA?s sponsors. Well I?m not buying what they?re selling — I say we can have both security and privacy. Because let?s face it: We do need better cybersecurity to protect Americans and our economy from harm. In fact, compared to major natural disasters, cyber attacks by a capable adversary could actually affect basic infrastructure like power and water supply for a much more prolonged period and across a much wider geographic area. 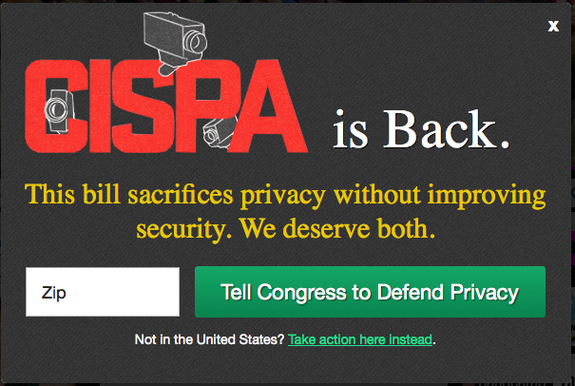 CISPA, the cyberspying bill, is back in Congress and plagued with many of the same problems as last year?vague definitions and the grim government access loophole to name just a few. The bill also grants broad immunity to companies as long as a company acts in “good faith.” One section of the immunity clause even grants immunity for any “decision made” based on information about a perceived threat. The clause opens up a wide door for abuse and is yet another reason why we urge users to stop CISPA.

Under CISPA, Who Can Get Your Data?

Is it worth spending half your profits “fighting piracy”?

On TechDirt, Tim Cushing follows up on a WSJ story where filmmaker/indie distributor Kathy Wolfe says that half of her profits, about $30,000, are spent sending out DMCA takedown notices to fight piracy. Wolfe has an admirably successful and long-lived business, and Cushing tries to find out how Wolfe hit on the $30,000 figure as the optimal amount to spend fighting piracy, but it seems that Wolfe’s spending of half her profits are based largely on faith, and unsupported by any data she is willing to share.

Last week, we brought you the wonderful news that a district court in San Francisco had struck down the law that allowed the FBI to issue its own “National Security Letters” (NSLs) — secret search-warrants with permanent gag orders. Now, Matt Zimmerman, a senior staff attorney at the Electronic Frontier Foundation (who brought the case on behalf of an unnamed telco), explains in depth what EFF asked the court to recognize, how far they got, and what happens next:

from EFF.org Updates by Mark Rumold

In a brief filed on Friday (PDF), EFF continued its fight against secret surveillance law, asking the D.C. Circuit Court of Appeals to order the release of a secret opinion of the Office of Legal Counsel (OLC).

Meet Wikipedia, the Encyclopedia Anyone Can Code

Thanks to spy movies and other entertainment fare, we all have our own picture of what the Central Intelligence Agency is like ? but the agency?s chief technology officer, Ira ?Gus? Hunt, told attendees at GigaOM?s Structure:Data conference that just like any other company, the intelligence division has to somehow find the signal in an ever-increasing volume of noise. And that problem is getting

Don?t Download That Bro, You?re Going to Get Busted!

Ever since the very first file-sharing lawsuits (or at least threats of them) raised their heads in the last decade, people have wondered if they might become the next victim. Many carried on oblivious and haven?t had a single problem, but others wonder if there is some kind of magic formula to staying out of trouble.

Google’s Transparency Report gives country-by-country statistics on the state requests it receives for personal private records. Below, EFF and SHARE Defense ranked the top countries requesting data?not by the total numbers of requests, but by how many accounts are requested relative to the total number of Internet users in each country. We believe this chart is fairer for countries that have a large Internet user population, but who make a smaller percentage of surveillance requests. These results are not a perfect measure, but we can still see the disproportionate activities of some small nations who make relatively relative high numbers of data requests.  Google  statistics refer to user accounts, and not the number of affected  users. One user may have more than one account (see Google Transparecy Report FAQs). Moreover, Google is also less popular in some countries than others, which lowers the  number of requests they receive from a particular jurisdiction.

Since Google first began releasing its transparency reports three years ago, international user-data requests have snowballed for Google — a trend that shows no sign of abating. How Google has responded to these requests has varied by region.

Google Takes the Dark Path, Censors AdBlock Plus on Android

from EFF.org Updates by Peter Eckersley

In a shocking move, Google has recently deleted AdBlock Plus from the Android Play Store. This is hugely disappointing because it demonstrates that Google is willing to censor software and abandon its support for open platforms as soon as there’s an ad-related business reason for doing so.

Matthew Keys? legal defense in face of hacking indictment: He was an undercover journalist

3 Ways to Start Using Google+ (Before it’s Too Late)

from social media vb by FixCourse

Google+ isn’t supposed to be Facebook or Twitter. Instead it’s a “social spine”, a virtual identity, that connects you to everything else online

from Mashable! by BusinessNewsDaily

Mobile apps offer consumers fun and functionality via the one device that stays with them throughout the day. The explosion of the apps ecosystem is driven by new business models where many apps are free or heavily discounted which of course consumers love, but where developers monetize the information they collect on their users.

Aaron Swartz?s Lawyers Accuse Prosecutors of Misconduct; Help the Next Aaron By Reforming the CFAA

On Wednesday, the Huffington Post reported that lawyers for the late Aaron Swartz have officially accused his prosecutor Steven Heymann of misconduct.

According to Aaron Swartz’s defense team, federal prosecutor Steve Heymann (star of Quinn Norton’sextraordinary piece on the prosecution) illegally withheld evidence that would have exculpated Aaron:

The Number of Phishing Websites Declines in 2012

Patent Trolls on the Hot Seat

Today Congress heard overwhelming evidence about how patent trolls?companies that assert patents as a business model instead of creating products?are abusing the system to stifle innovation. At a hearing before the House Judiciary Subcommittee on Courts, Intellectual Property and the Internet, witness after witness testified about patent trolls who use the threat of ruinous defense costs to pressure companies into paying settlements on vague and overbroad patents. The Subcommittee also heard testimony about the disturbing trend of patent trolls targeting end-users?such as cafes providing Wi-Fi or businesses using standard office technology like scanners and email.

from About Web Logs

What is FTP and why does it matter to bloggers? The vast majority of beginner bloggers don’t know the answer to that question, and believe it or not, many people who.

from EFF.org Updates by Maira Sutton

Last month, U.S. President Barack Obama announced the launch of a new trade deal between the United States and the European Union. This transatlantic free trade agreement (TAFTA)?or what government leaders are touting as the Transatlantic Trade and Investment Partnership (TTIP)?is likely to carry copyright provisions that would pose a serious threat to digital rights. Past and currently negotiated trade agreements have enacted rules that would force ISPs to turn into copyright police, place harsh and disproportionate criminal penalties on file sharers, and seriously impair users’ ability to innovate and access content on the Internet.

Half of What Online Advertisers Know About You Is Wrong