from BBC News | Europe | World Edition
Black smoke emerges from the Vatican’s Sistine Chapel chimney, indicating that cardinals have failed to elect a new pope on their first day of voting.

The Great Graphics Glut of the 2013 papal conclave

from BBC News | Europe | World Edition
Severe snow and strong winds have brought parts of northern Europe to a standstill.

from euro|topics
The controls on the borders of Romania and Bulgaria will remain in place for now. In particular the poor state of the judicial systems in the two countries prevented their accession at this point in time, Germany’s Minister of the Interior Hans-Peter Friedrich said at a meeting of EU foreign ministers on Thursday. Europe is suddenly making a big fuss about problems it has known about for a long time, some commentators criticise. Others justify the blockade by pointing to the increased pressure Eastern European migrants would put on welfare systems.

from euro|topics
On the strength of the right-wing conservative government under Viktor Orbán, the Hungarian parliament on Monday passed a controversial constitutional reform curbing the powers of the country’s highest court. Commentators say the rule of law has been dealt a severe blow and stress that Europe must not turn a blind eye to developments in the country.

from Global Voices Online by Veroniki Krikoni
In the Skouries region of Chalkidiki, Northern Greece, Canadian company Eldorado Gold obtained mining rights for the Kakkavos Mountain gold through its Greek subsidiary, Hellenic Gold, after a controversial transfer process in 2004. Local residents have been opposed to the company owing the mining rights during the last decade. Ierissos city feels like a police state, and many suspicious events are taking place

from open Democracy News Analysis – by Aurelien Mondon
From Geert Wilders in the Netherlands to Marine Le Pen in France, far right politicians using new strategies are being welcomed into mainstream discourse.

Some more signs of financial market fragmentation in the eurozone?

by Open Europe blog team
The European Repo Council of the International Capital Market Association (ICMA) released its bi-annual assessment of the European repo markets today. Admittedly, not the most exciting of intros but the survey does contain some interesting points regarding financial markets in the eurozone. As a reminder, repo markets are the main source of short term funding for banks (or at least they should be if markets are functioning normally).

Is the Netherlands heading for a referendum on Europe?

How could Italians possibly vote for Silvio Berlusconi again?

Hoping for an Italian Spring?

from open Democracy News Analysis – by Andrea Teti
More widely, what the M5S? success represents is a challenge to the approach to economic reform which has too often rewarded the rich responsible for the problems, while making the working classes pay for Europe?s economic mess.

To many of the non-European participants at the Ambrosetti finance forum, Europe appears as a cause for concern more than a model worthy of emulation

France and its Catholic legacy

The Great Portuguese Hollowing Out

There should be a handover of power to younger leaders, from which Matteo Renzi is the most likely prime minister, says Wolfgang Münchau

One in four Germans would back anti-euro party: Poll

from Hurriyet Daily News
Tired of living under the threat of financial crisis spread around Europe, 26 percent of Germans would vote for anti-euro party in approaching elections, a poll says

from Hurriyet Daily News
The euro became the most lucrative instrument of financial investment in February.

Times may be tough but this is not the 1930s. Modern Europe is a much richer and less traumatised continent, writes Gideon Rachman

Are anti-euro sentiments brewing in Austria? 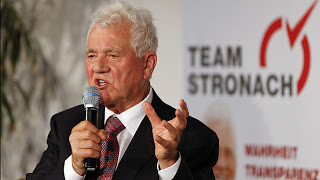 Last weekend in Austria, “Team Stronach”, a newly-founded political party which aims to abolish the euro, did quite well in two regional elections, winning 9.8% in the state of Lower Austria and 11.3% in the state of Carinthia.

“The End Of Europe?s Bonus Culture” by Henning Meyer

Chávez will continue to inspire ? but not in Europe – by Martin Kettle

by EU-Digest
One of the most famous things ever said about Hugo Chávez, who died on Tuesday, was written by the Nobel laureate Gabriel García Márquez after accompanying him on a flight from Havana to Caracas in 1999, just before Chávez took office as Venezuela’s president for the first time.

from open Democracy News Analysis – by Ben Hayes
The EU is providing generous R&D (research and development) subsidies to Israel Aerospace Industries (IAI), the state-owned manufacturer of Israeli ?drones? and other ?battlefield solutions?. Some of the grants are for IAI to adapt its killer robots for use within the EU.

from euro|topics
The Czech Senate announced on Monday that charges will be filed against outgoing President Václav Klaus for high treason at the country’s constitutional court. Klaus had granted amnesty to 7,000 prisoners at the beginning of January who are allegedly guilty of fraud against investors, among other crimes. Commentators see the charge as a public rejection of the president’s undemocratic act, but say he has nothing to fear anyway.

What next on the EU bank bonus cap?

by Open Europe blog team
Today has been billed as the final chance for UK Chancellor George Osborne to secure a change in the proposal to limit bank bonuses across the EU.

How to build a foreign policy for introvert Europe?

from open Democracy News Analysis – by Spyros Economides
The euro crisis has resulted in an even more introvert Europe, and everything has yet to be done to build a European foreign policy. So where should we start?

Bonuses, Osborne and the Luxembourg Compromise

from Brussels Blog by Alex Barker

The Italian puzzle – austerity, corruption, and the man next door

from open Democracy News Analysis – by Lorenzo Marsili and Alessandro Valera
The chaos that followed the Italian elections might be the foretaste of bigger changes to come. But which ones?

Let’s tone it down a notch: Comparing the UK and German debates on EU migration

No one picking up a UK paper will have failed to notice that there issome concern over EU migration on the British isles, with the debate being triggered by the end of so-called “transitional controls” for Romanian and Bulgarian workers (the countries joined in 2007).

from cafebabel.com by euro topics
Venezuela’s president died of cancer on 5 March, aged 58. The socialist had ruled the oil-rich country for 14 years with a policy of redistribution and nationalisations. Selections of how the Finnish, Swiss, Swedish, Slovenian, Polish, Dutch, French and Spanish media reacted in the fallout

The rise of the anti-politician

from open Democracy News Analysis – by Kaushik Barua
The internet is an angry place, as is obvious from any examination of the comments section of blogs or popular news-sites. Anti-politicians have managed to use this disembodied universe we all increasingly inhabit to stoke people?s anger.

from open Democracy News Analysis – by Carlo Ungaro
More than a week after the elections, the situation in Italy is as hazy as ever, with no obvious way out of the political deadlock.

Silvio Berlusconi has just been sentenced to one year in prison in the so-called BNL-Unipol trial. We thought a short Q&A could be useful for those of you who don’t follow Italian politics on a daily basis.

Wales is leading the debate on a federal UK

from open Democracy News Analysis – by John Osmond
John Osmond reflects on how far Wales has come in the last 15 years, as he steps down after a long career as head of the Institute of Welsh Affairs. The history demonstrates the unstoppable dynamic built into the devolution process. Now Wales is at the forefront of thinking on the possible future of a ?Britannic federation?.

The Future of EU Enlargement

from Docuticker
Source: House of Lords European Union Committee (UK) From Summary: The enlargement process has, historically and in successive Treaties, been understood as an integral part of the European Union?s development. 40 years after the first enlargement, which brought the UK, Ireland and Denmark into the then European Community, the EU is

Female genital mutilation in the European Union and Croatia

from Docuticker
Source: European Institute for Gender Equality From Executive Summary: Female genital mutilation (FGM) refers to all procedures involving the partial or total removal of the external female genitalia or other injury to the female genital organs for non-medical reasons. It is at heart an expression of gender inequalities, recognised as […]