Kerry in Turkey for talks on Syria

from Hurriyet Daily News
US Secretary of State John Kerry was due to discuss the Syria crisis with Turkey’s leaders.

from Yahoo news
ANKARA (Reuters) – A row over Turkish Prime Minister Tayyip Erdogan’s description of Zionism as a crime against humanity risked overshadowing U.S. Secretary of State John Kerry’s visit to Turkey on Friday, his first to a Muslim nation since taking office. Kerry is meeting Turkish leaders in talks meant to focus on Syria’s civil war and bilateral interests from energy security to counter ..

Kerry to ‘express concerns’ to Turkish PM over Zionism remarks: US official

from Yahoo news
A senior American official says U.S. Secretary of State John Kerry will take Turkey’s prime minister to task for “particularly offensive” comments he made this week equating Zionism with a crime against humanity.

from Hurriyet Daily News
The leader of Germany?s opposition voiced support on Friday for Turkey?s full membership of the EU..

from Hurriyet Daily News
Nicos Anastasiades, who was sworn in as the new president of. 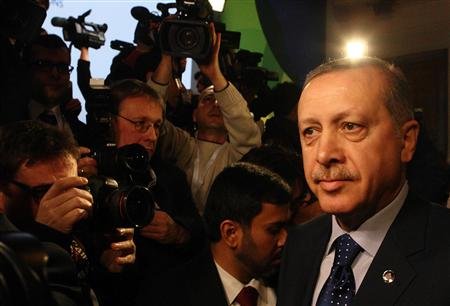 1 thought on “Kerry in Turkey amid Zionism row…”