from Hurriyet Daily News
Turkish Airlines (THY) released a statement Feb. 13 in response to the ongoing debate over company..

from Mavi Boncuk by M.A.M
List of countries by homicide rate by decade per year per 100,000 inhabitants. The reliability of underlying national homicide rate data may vary. Homicide demographics are affected by changes in trauma care, leading to changed lethality of violent assaults, so the homicide rate may not necessarily indicate the overall level of societal violence.

from Hurriyet Daily News
Turkish Sports and Youth Minister Suat Kılıç has expressed his backing for the.

Turkey to get older with 93 million people in 2050

from Hurriyet Daily News
Turkey?s population will start to decline by 2050, after reaching a peak of 93.4 million.

from Kamil Pasha by Jenny White
Some information from a recent evaluation of Turkey?s publishing industry (click here):
According to the Turkish Ministry of culture, over the last 10 years there has been a 300 percent increase in number of books published. In 2011, according to the Turkish Publishers Association, 43,190 titles were released with sales of 1.5 billion dollars.  30-35% are translations, mostly from English. 54 percent are books related to education, language training and academic study.

from EU-DIGEST by EU-Digest
Turkey?s largest companies are increasingly assigning women to key positions and corporate boards. Of the top executives in these companies, 26 percent are women – well above the EU average.

Turkey now over 75 million in population

from Hurriyet Daily News
Turkey now has 75.627.384 people residing in the country, according.

New Flight Attendant Uniforms | Are They for Real! 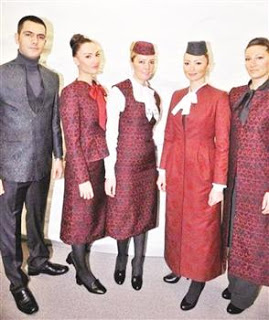 A preview photo of Turkish Airlines new flight attendant uniforms was leaked onto the internet and The uniforms, designed by Turkish designer Dilek Hanif, were slammed as “too conservative”.