from euro|topics
After lengthy negotiations, the EU heads of state and government agreed on the financial framework for 2014-2020 on Friday. The EU Parliament has said it is ready to oppose the budget, which for the first time is smaller than the previous one. While some commentators are unhappy that solidarity and competitiveness were sacrificed to arrive at the compromise, others find it remarkable that an agreement was reached at all.

Divided we fall: intolerance in Europe puts rights at risk

from open Democracy News Analysis – by Benjamin Ward
The truth is discomforting: hatred and intolerance are moving into the mainstream in Europe.
An Afghan migrant is stabbed in the heart on the streets of Athens. Black-shirted paramilitaries linked to Hungary?s third-largest political party march through a Roma neighbourhood shouting, ?You will die here.? A neo-Nazi gang commits a string of murders of Turkish immigrants in Germany. An ideologue driven by hatred of ?multiculturalism? kills 67 mostly young people on a Norwegian Island.

from euro|topics
In a surprise move, Pope Benedict has announced that he is resigning. Addressing the cardinals in Rome on Monday, he cited his advanced age as the reason for his stepping down on February 28. Some commentators praise Benedict for taking a revolutionary step and showing his human side. Others see the traditionalist’s resignation as a chance for reform.

If not the EU, who will Britain blame for its democratic deficit?

from open Democracy News Analysis – by Sarah Wolff
Debating the ?in-or-out? question is only a smokescreen hiding the elephant in the room: the state of national democracy.

from open Democracy News Analysis – by Konstantinos Poulis
With reports emerging of antifascist protesters being tortured by the Greek police, a new line has been crossed in the progressive adoption of ideas and methods inspired by Golden Dawn in all layers of Greek society. What can save Greece now? 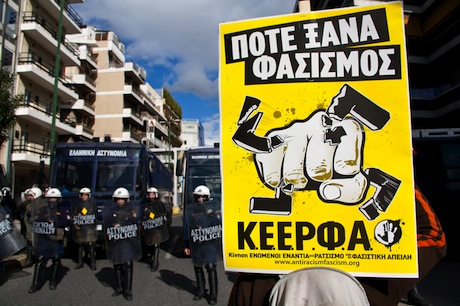 Another German politician accused of plagiarism

from euro|topics
France’s National Assembly voted in favour of introducing same-sex marriage and adoption rights for gay couples by a clear majority on Tuesday. The controversial bill was passed with 329 deputies in favour and 229 against. Commentators see the decision as a triumph for the Hollande government and as a signal that the Church should not interfere in the debate.

George Soros: The euro is “bound to break up the European Union” 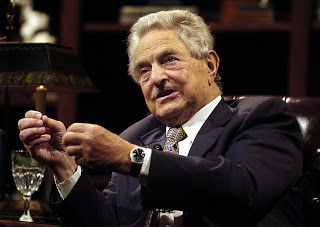 In an interview with Dutch TV programme Nieuwsuur (about 28 minutes in), prominent investor George Soros has warned that, “I am terribly concerned about the euro potentially destroying the EU. There is a real danger that the solution to the financial problem creates a really profound political problem.”

Who will decide the future of Spain ?

from open Democracy News Analysis – by Liz Cooper
Accusations of corruption against members of the ?Partido Popular? far outstrip previous corruption scandals involving Government members. Liz Cooper asks whether the technically independent Judiciary will keep faith with the people, hold its nerve and bring the cases to court without delay to be tried free of political interference

from Blogactiv by sanchia
Tweet
The French president Francois Hollande, last week snubbed British Prime Minister David Cameron at his drive to reduce the proposed EU budget, in which he eventually succeeded.  As Cameron walked into the meeting he said:

Higher education under threat in Hungary

from open Democracy News Analysis – by Károly Füzessi
The drastic higher education reforms the Hungarian government has introduced in the last months of 2012 have sparked nationwide protests. But while the government continues to implement contradictory reform, resistance from below is gaining ground.

from Public Affairs 2.0 by Vassia Popova
As mentioned in last week?s post, clunky terms, and especially acronyms, litter the Eurobubble. Though Spencer was referring to the wonderful world of ILUC, the case is no different when it comes to air quality.

Could the EU budget be cut for the first time?

by Open Europe blog team
The rumours are flying in thick and fast from Brussels regarding the latest EU budget numbers and the likelihood of a deal. The range estimates we laid out in our briefing still stand up, with several suggestions that Herman Van Rompuy’s latest proposal will be for ?959bn in commitments and as low as ?913bn in payments. In terms of figures this would represent a significant victory for the UK and other states that want to see budgetary restraint. Below is how such a deal would compare to Van Rompuy’s November proposal, and more importantly, the current long-term EU budget (MFF).

Would the UK’s contributions still increase under a new long-term EU budget?

by Open Europe blog team
Aside from the headline figure, where it looks as though David Cameron will get his cut, in terms of domestic politics, the next most important aspect of all of this is how the UK’s contributions to the budget will be affected. In other words, will the UK still be forced to send more cash to Brussels?

from euro|topics
The EU heads of state and government will resume the negotiations on the joint budget 2014-2020 this Thursday. They need to reach a consensus at the summit on both the total amount and how the money is to be distributed. In view of widely diverging interests, a compromise is once again unlikely, commentators fear, calling for greater solidarity among the member states.

Of power and democracy: the rise and fall of Mario Monti

from open Democracy News Analysis – by Francesca E.S. Montemaggi
In November 2011, Mario Monti, an academic and former European Commissioner, was seen as the providential man to save Italy from its troubles. Now, only one year and a few months later, he is trailing behind in the polls and set to lose the upcoming elections. What happened?

?Hands up! This is a robbery!?: Protests Continue in Spain

from Global Voices Online by Anna Williams
This article is part of our special news coverage Europe in Crisis.
This past weekend Madrileños took to the streets in droves to show their fury with Prime Minister Mariano Rajoy over new corruption allegations. On Thursay, the national newspaper El País published [es] images of ledgers in which Rajoy and other top Partido Popular members appear as receiving illegal payments (#lospapelesdebarcenas [es]). Protests concentrated outside the Party’s headquarters lasted all weekend.

from open Democracy News Analysis – by Alexander Alvaro
The United Kingdom can certainly hold a referendum about the country’s EU membership. But it would be unfair to make Europe wait until 2017. The continent needs to know sooner than that if the British want to leave.

from open Democracy News Analysis – by Geoff Andrews
Silvio Berlusconi has survived ejection and scandal to return to the centre of Italian politics. But it is his opponents more than the man himself who carry the blame for his continuing influence, says Geoff Andrews.

A European Spoon River: migrants without names, without voices and without rights

from open Democracy News Analysis – by Susi Meret
As economic logic supplants all other considerations in crisis-ridden Europe, the plight of immigrants who knock on the doors of Fortress Europe becomes inextricable, often ending with tragic consequences.

from euro|topics
French President François Hollande warned against cuts to the EU budget in a speech before the European Parliament in Strasbourg on Tuesday and called for an active exchange rate policy for the Eurozone. Hollande has set France on a collision course with Britain and Germany ahead of the EU summit on Thursday, commentators write.