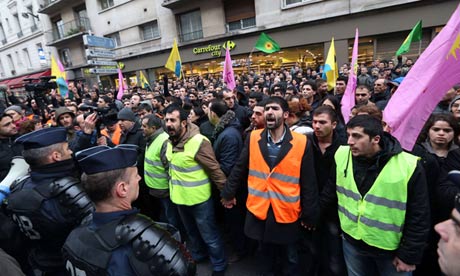 from Hurriyet Daily News
After killing three Kurdistan Workers? Party (PKK) members in Paris, the killer or killers locked the door of the office where the attack took place, Turkey’s ambassador to Paris said.

We will see sincerity of talks with PKK leader, Turkish president says

Top Kurdish Militant Is Among Three Slain in Paris

from NYT > Turkey by By SCOTT SAYARE, ALAN COWELL and SEBNEM ARSU
French police officials said that the bodies of the three women had been found at a Kurdish institute and appeared to have been shot in the head

PKK founder killed with two others in Paris

from FT.com – World, Europe
One of three women shot dead in Paris in an attack police say was politically motivated was reportedly a founding member of the PKK militant group

from Hurriyet Daily News
Critical negotiations between the Turkish intelligence chief and the imprisoned leader of the outlawed Kurdistan Workers?Party (PKK) are focusing on a gradual agenda of conflict resolution, Turkish media reported yesterday.

Why promote the ex-Marxist Öcalan as a devout Muslim?

from World news: Turkey | guardian.co.uk by Owen Bowcott
British observers warn that private conversations between lawyers and their clients were illegally recorded
While UK courts made their traditionally slow start to the new year, a hearing in Istanbul managed to pack more than 100 lawyers onto its benches on January 3rd.

A genuine process or a political move for 2014?

from Hurriyet Daily News
To be frank, the end of the hunger strikes after Abdullah Öcalan ? imprisoned leader of the outlawed.

from Hurriyet Daily News
Nationalist Movement Party (MHP) leader Devlet Bahçeli claims that the talks with the PKK chief is the first step of ?the project of separating Turkey?