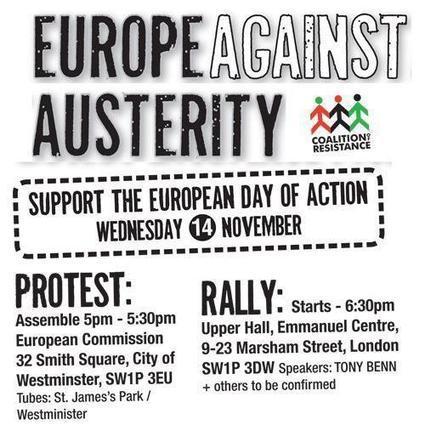 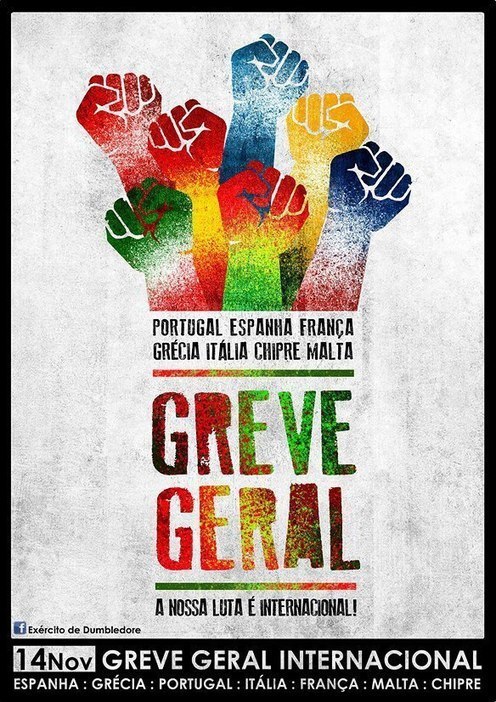 from euro|topics
Employees in Spain and Portugal are protesting against their governments’ austerity policies with a coordinated general strike today, Wednesday. There are also plans for strikes today in Italy and Greece. Commentators in the crisis states see the strikes as a historic declaration of solidarity against the ruthless austerity terms to which the governments of Southern Europe have submitted.

Spanish and Portuguese workers will stage the first coordinated general strike across the Iberian Peninsula on Wednesday, shutting transport, grounding flights and closing schools to protest against spending cuts and tax hikes.

from BBC News | Europe | World Edition
Tens of thousands of workers are staging protests and strikes across Europe against rising unemployment and austerity measures.

EP report on the situation of fundamental rights in the EU

Today the LIBE and AFET Committees of the European Parliament accepted the report of Monika Fla?íková Be?ová on the Situation of fundamental rights in the European Union. The report welcomes the steps undertaken by the European Commission in order to ensure that the legislative proposals comply with the Charter of Fundamental Rights of the EU. And this is all when it comes to the compliments addressed by the MEPs to the Commission, EU Agencies and Member States.

What to expect from the Czech presidential election

from open Democracy News Analysis – by Jan Hornát
For the first time in their history, Czech citizens will directly elect their president next year, to replace the notoriously Eurosceptic incumbent Vaclav Klaus. The stakes are high in this election, for it will be a large-scale stress test for Czech democracy and European integration in Central Europe 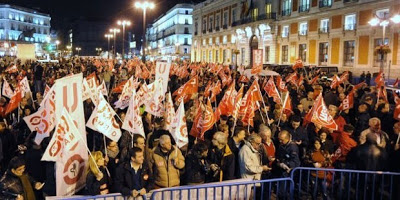 from euro|topics
The Eurozone finance ministers resolved at their meeting in Brussels on Monday to give Greece two more years to get its public deficit under control. The decision on the next installment of bailout funds was postponed to next week. Commentators write that the creditor countries are simply playing for time and delaying the country’s bankruptcy.

Who are the Finns? Ask The Finns!

from open Democracy News Analysis – by Anna Vesterinen
Combining support for the welfare state with xenophobic populist sentiments, The Finns have clouded and shaken the traditionally straightforward Finnish political landscape. Beyond this textbook example of mainstream recognition for a previously radical faction, what do the Finns really stand for?

from open Democracy News Analysis – by Daniel Smilov
The response by Bulgaria’s authorities to the mid-summer killing of Israeli tourists reflects the country’s lack of experience of international terrorism, as well as specific internal democratic deficits. In such a context there is now a danger of overreaction, says Daniel Smilov.

from Jon Worth by Jon
The European Commission, and Commissioners themselves, have progressively taken to Twitter over the past couple of years as a way of communicating with (at?) EU citizens. So how are they doing? This blog entry gives a quick summary. My starting point is that a good Twitter account is an engaging and personal one, where either a person?s views shine through, or a dialogue is established with followers.

The Sicilian blow to Italian politics

from open Democracy News Analysis – by Kristinn Már Ársælsson
After the crash that destroyed Iceland’s economy, Icelanders started to take an interest in new forms of political and economic governance. So – what can we learn from the country’s experiments?

from open Democracy News Analysis – by Thorvaldur Gylfason
The Icelandic experiment raises many intriguing questions: how do citizens of a country get called to this office? How do they draft a new constitution? What sort of political forces do they have to balance? An insider view from a former member of the Constitutional Council.

Labour’s drift to isolationism in Europe

Labour’s opportunistic stance on increasing the EU budget reflects wider problems on the British left with regard to Europe. However tainted with neoliberal doctrine, the EU remains our greatest hope for contesting the triumph of the global market.

EU and IMF clash over austerity

by EU-Digest
The British Financial Times recently posed the question: “Are the austerity measures imposed on struggling eurozone countries contributing to a deepening recession in the region?”

Much ado about little: Britain and the EU budget

by Centre for European Reform
As almost all European governments are cutting spending, it is hardly a surprise that the EU?s budget is under fire. The European Commission has rather optimistically proposed a real terms increase of five per cent in total spending over the next budget period, which runs from 2014 to 2020. This amounts to 1.05 per cent of projected EU GDP over that period. Most of the countries that pay more into the budget than they get back reject this proposal. Germany and Ireland want the budget limited to one per cent of EU GDP (which means that as Europe?s economies grow, the budget can grow too, but at a slower rate than the Commission wants). However, British prime minister David Cameron wants to go further: he has promised to veto anything but a freeze in real terms. It may be difficult to back down from this position in budget negotiations: the opposition Labour party combined with backbench Conservative rebels to win a parliamentary vote last week that called for a cut to the budget, defeating the government. Cameron would be unlikely to get a larger EU budget through the UK?s parliament if he compromises at the summit, on November 22nd.

from Global Voices Online by Richard Wanjohi
The last weeks of October 2012 saw racism rear its ugly head again, in the European Leagues, particularly in England, affecting both the Premier League clubs and players, as well as the national one too. Many have wondered whether the major football bodies UEFA and FIFA will act as some have been trying to do like the Football Association (FA) in England.

How small countries can save the European project: the rise of the habitat-nation

from open Democracy News Analysis – by Ignasi Ribó
The European project is failing. It is time to consider a new theoretical model beyond the nation-state: smaller, localized communities, “habitat-nations”, are the building blocks for a revitalized and democractic pan-European project.

from euro|topics
The EU states are coming into the negotiations on the EU’s 2014-2020 budget with their fists swinging. In the run-up to the summit on November 22, Britain, France, Sweden and Denmark have all announced their opposition to the planned budget. While some commentators fear the struggling EU may not survive the quarelling, others can well understand the revolt against the costly Brussels bureaucracy.

from Global Voices Online by Daniel Bogre Udell
On November 25, 2012 Catalan voters will go to the polls for a round of early elections. After September 11th’sseparatist rally in Barcelona, in which more than a million individuals took to the streets to demand Catalonia’s secession from Spain, these elections are shaping up to be a plebiscite for establishing an independent Catalan state (hopefully) within the European Union. The contentious electoral climate continues to provoke an intense online debate, driven in part by internet campaigns designed to stir the polemic.

The power of Merkiavelli : Angela Merkel?s hesitation in the Euro-crisis

Refugees on Hunger Strike in Germany against Politics of Deterrence

from Global Voices Online by Rachel Horst
On October 24, 2012 twenty-five asylum-seekers went on hunger strike in front of the Brandenburg Gate in Berlin, Germany. The protest in the highly symbolic location, which stands for the once violent division of a people by politics, is the latest in a chain reaction that began in February with the suicide of the Iranian Mohammad Rahsepar in a refugee camp in Würzburg.

Will foreign residents get the right to vote in France?

Another disastrous budget for Greece

This week saw the release of the Greek budget plan for 2013-2016 and it did not make for happy reading. The English version is yet to be released but below we reproduce some of the key facts and figures from the Greek report. The table below essentially sums up the report and the crushing blow it delivers to hopes of a Greek recovery:

from Project Syndicate by Ana Palacio
Growing calls for independence in Catalonia and Scotland are symptomatic of conditions not only in Spain and the UK, but also in the EU as a whole. Whatever its roots in old grievances, secessionism, it seems, is a logical extension of Europe’s ongoing financial crisis.

Democracy, the EU and Yanukovych?s party lost on elections in Ukraine

from Blogactiv by anatoliymartsynovski
Everything has happened even worse than expected.
?The 28 October parliamentary elections were characterized by the lack of a level playing field, caused primarily by the abuse of administrative resources, lack of transparency of campaign and party financing, and lack of balanced media coverage. Certain aspects of the pre-election period constituted a step backwards compared with recent national elections?, ? stated International observation mission in its preliminary conclusions, published next day after voting.

Migrants as activist citizens in Italy

from open Democracy News Analysis – by Federico Oliveri
In 2010 and 2011 migrants behaved like activist citizens throughout Italy, initiating a new cycle of struggles in the crisis of neoliberalism. Their contestation of an exclusionary, racialized and competitive model of society could become a goal shared by migrants and nationals alike.

from open Democracy News Analysis – by Lisa Pilgram
Muslims in Britain marry, divorce, bring up their children and deal with death by resorting to a variety of norms such as Sharia law, English family law and customary law. The sole legal framework of state law within which western conceptions of citizenship are imagined is in contrast to British-Muslim family law, a set of new hybrid legal practices of citizenship.

from open Democracy News Analysis – by IKER BARBERO
The threat that immigration poses to so-called western democratic values is increasingly the subject of neo-orientalist public discussion: it willingly refers to the (often Muslim) migrant as a savage, uncivilized, terrorist ?other?; an ?anti-citizen?. If we are to arrive at a model of citizenship beyond orientalism, we need to abandon current border and citizenship regimes.

by Open Europe blog team
We have a piece in City AM today, which look’s  at the impact of this week’s crucial votes in Greece, see below for the piece in full:

Burning cars in the banlieues as acts of citizenship

from open Democracy News Analysis – by Helen ArfvidssonThe worlds of concrete, the car and masculinity are ways to delve into acts which have only so far attracted attention for their violence and destructive capability.
Burning cars and youth rioting in the streets, followed by demonizing images in the media; the scene is becoming increasingly common, France in 2005,

from open Democracy News Analysis – by Duygu Gürsel
Kanak Attak in Germany is an anti-racist collective of people with mixed ethnic backgrounds who aim to turn the dominant discourse on migration upside down. They invite us to consider the role of intellectuals in migration regimes