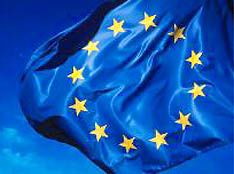 The European Union has won the Nobel Peace Prize for its long-term role in uniting the continent, the Norwegian Nobel Committee said today..

from Social Europe Journal » Blogs by Henning Meyer
German media and Norwegian radio report that this year?s Nobel Peace Prize goes to the EU. I?ll update this post throughout the day as I am really interested in the reasoning why. A welcome boost against rising Euroscepticism though!

The EU and peace 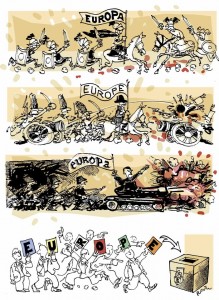 There have been two lines of attack from UK EU-phobes to the news that the EU has been awarded the Nobel Peace Prize. One has been to point to the current economic travails of the EU, and the political strife that has caused, and to criticise the award as a result. For me the award looks slightly odd as a result of this poor timing (10 years ago would have been better), but it does not render the award wrong per se.

from FP Passport by Joshua Keating
I’d like to be able to boast about having included the European Union on my “Handicapping the Nobel Peace Prize” list earlier this week, but given that I put it in the longshot category alongside WikiLeaks and Willie Nelson, I can’t really claim to be too prescient. (There’s always next year, Willie!)

No more EU funds for Erasmus

from Hurriyet Daily News
The European Union has announced that it is running out of funds for its biggest educational program, Erasmus.

by Victoria Fioravante
All links lead to texts in Spanish unless otherwise noted.
Fears of state censorship and declining freedom of expression rise as the influential, political satire programme  ?Carne Cruda? found itself unexpectedly cancelled from national radio. An unprecedented act by the director ofSpanish National Radio 3 (RNE3) led to the end of ?Carne Cruda? (Raw Meat), an influential radio programme celebrated for its honest, witty criticisms of Spanish society, economics and politics, hosted by Javier Gallego. This created widespread commotion among the internet community.