Inspired by the IABR’s approach, architect Emre Arolat, the curator of Musibet, invited the IABR to present its working method and three key projects – the Test Sites in Rotterdam, São Paulo and Istanbul – in the form of a new, small exhibition: a 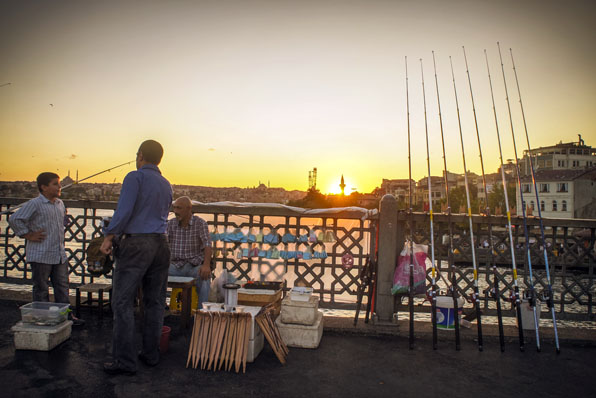 Istanbul ? and before that, Constantinople ? has long depended on local fishing in the Bosphorus for both its economic and nutritional needs. At all hours of the day, fishermen can be seen lining the shore and the Galata Bridge, which connects the old

Istanbul is a wonderful city for walking as much as it is a slow boat trip along the Bosphorus past the yali ? old wooden (and expensive) summer homes ? or a visit to Topkapi Palace, with its plane-shaded courtyards and Sultan’s harem rooms. For dining

Istanbul, An Enchanting Paradise – For Cats

ISTANBUL – Mornings around nine, when shop owners on Galip Dede Street open their doors, dozens of cats appear out of nowhere. They know it’s breakfast time. Not right away: the men first have to unpack new merchandise, stock the shelves, and check

?Half of Istanbul homes are not quake resistant?

As the countdown to the start of Turkey?s massive urban transformation process.

Istanbul is very metropolitan, very friendly for English speakers, and massive in size. There are 10 different tours available to those interested in exploring it. I took two of them and feel as if I didn’t even scratch the surface on what was a

As the week progresses, you get accustomed to the culture and the lifestyle in Turkey. I get excited when I see an American movie on the hotel television, even though it’s in Azerbaijani and I have to try to remember what Danny Glover was saying to Joe

Turkey?s Privatization Administration has announced that it has received 12 applications for the privatization of Boğaziçi Elektrik.

Istanbul 2020: Turkish tourism market a real magnet for the bid

October 3 ? The Istanbul 2020 bid reports stellar tourism numbers for the first eight months of 2012 counting 22 million foreign visitors to the country which tops last year’s numbers by over half a million. Despite the global recession people are

Oman-Ottoman ties on show in Istanbul

ISTANBUL The ‘Oman in Ottoman Documents Symposium’ began at Yildiz Palace inIstanbul on Saturday. The two-day event is organised in conjunction with the Research Centre for Islamic History, Art and Culture (IRCICA), under the auspices of Beki