If Google yanks “Innocence of Muslims,” will it lose its DMCA Safe Harbor?

Robert Cringely speculates on the reasoning behind Google’s decision to continue hosting the controversial “Innocence of Muslims” clip despite a request from the State Department to remove it. Cringely believes that Google worries that if it were to begin removing videos, it would lose access to the “Safe Harbor” defense of the 1998 Digital Millennium Copyright Act, which exempts it from liability for copyright violations by its users, provided that it does not police the users’ uploads (except to ensure compliance with its terms of service). Thus if Google were to begin removing videos from US view on non-copyright/non-terms-of-service grounds, it could be liable for $150,000 copyright fines for every infringing video in the YouTube collection.

US consulate ‘easy target’ for extremists

Hard questions asked about why diplomats were in a volatile region in Libya on the anniversary of September 11.

from Wired Top Stories by Spencer Ackerman and Noah Shachtman

Four months before an assault in Benghazi that left four U.S. diplomats dead, the State Department signed a deal with a British security firm, Blue Mountain, initially worth $387,000 to protect the consulate. Contrary to a claim on Friday by State Department spokeswoman Victoria Nuland that “at no time did we contract with a private security firm in Libya,” the department inked a contract for “security guards and patrol services” on May 3 for $387,413.68, with an extension option bringing its total worth up to $783,000. The contract lists only “foreign security awardees” as its recipient.

from Global Voices Online by Amira Al Hussaini
Angry Sudanese protesters attacked the German and American Embassies in Khartoum in protest against a movie trailer, produced in the US, which insults Prophet Mohammad. 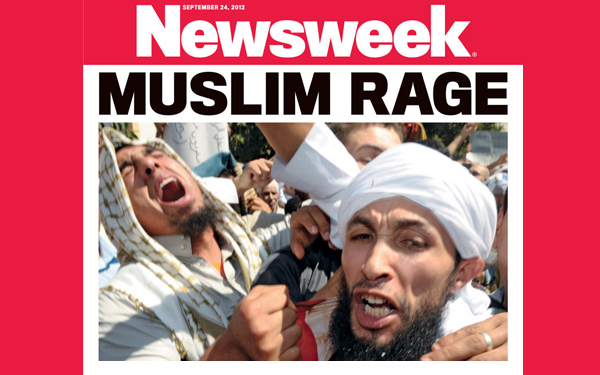 The unrest in several predominantly Muslim countries triggered by an anti-Islam film from the US continues. On the weekend thousands of people in Afghanistan and Pakistan demonstrated and the radical Islamic Hezbollah movement broadcast a video calling for new protests. Some commentators see the differences between the West and the Muslim world as unbridgeable. For others the protests are a continuation of the Arab Spring.

The Politics of Cinematic Hate 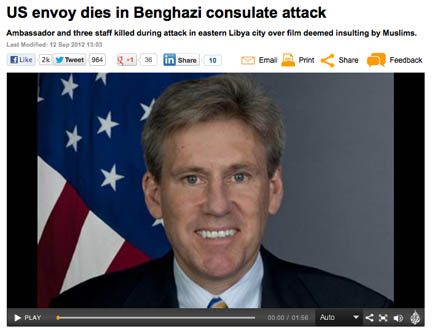 Yesterday was the 11th anniversary of the tragic loss of life on 9/11, the ugly outcome of hate in which people who had personally done nothing to offend the perpetrators lost their lives. Today we awake to hear that the American ambassador to Libya is dead; the American flag at the U.S. embassy in Cairo is torn to shreds. This is the same American diplomat who aided the Libyan revolution against Qaddafi; this is the same flag that is synonymous with the political notion of democracy. In both cases yesterday it was not a response to anything the United States government did or authorized, nor to any military action. A hate film, and a very poorly done one at that, had been posted on the Internet in which Islam and the prophet Muhammad are portrayed in an extremely negative way. The film, an excerpt of which can be seen here, is pathetic both as cinema and for its almost comical portrayal of Muslims. But it has provided an excuse for militants to once again harp on the specter of the United States against the Muslim world.

Meet some of the curious characters linked to ?Innocence of Muslims? film

from Boing Boing by Xeni Jardin
“There’s no indication that the government is questioning the right of these idiots to make that repellent film. On the other hand, it does make us nervous when the government throws its weight behind any requests for censorship,” the American Civil Liberties Union’s Ben Wizner said in an interview Friday.

The Clash of Civilizations takes a dangerous turn

from Hurriyet Daily News
Such is the state of the world that a nut case ? in this case an Egyptian Copt…

from Hurriyet Daily News
US and Libya offer conflicting explanations over an attack on US Consulate in Benghazi last week. The ongoing anti-American demonstrations, caused by a film mocking Prophet Muhammed, claim lives across the Muslim world