From the visually-striking stalls selling döner (lamb, chicken, or beef on a vertical skewer) to the balık ekmek (fish sandwiches) sold off of boats, one of the greatest attributes of Istanbul’s street food is the variety of options. Mornings can start with simit

Recep Tayyip Erdogan, Prime Minister of Turkey, unveiled Istanbul’s logo for the Candidate City phase of its bid for the 2020 Summer Olympic Games. The logo was unveiled Saturday night by the Prime Minister as he addressed the “record breaking” number

from Kamil Pasha by Jenny White
Andy Finkel takes on the AKP government?s latest outrageous and one might say wacko city planning nightmare ? a gigantic nearly 3-mile square assembly ground (for political rallies?!) on landfill in an area of vast archaeological significance. (Click here; excerpt is below). The AKP?s ?projects?, usually planned without public or professional input (or ignoring these), have ranged from razing actual historic neighborhoods (and kicking out the residents) and replacing them with faux Ottoman fiascos, allowing skyscrapers on the city?s emblematic skyline behind Topkapı, plopping supersized faux Ottoman mosques on every hilltop, and plowing a second Bosphorus through the middle of the city. (For details, see the posts in the ?Istanbul? category on this blog.)

This year the Berlin-based International Performance Association (IPA) will reach new heights as it holds its performance arts festival abroad for the first time. The first IPA festival to be held outside of Germany will take place in Istanbul from July 29 to Aug. 12.

Has Erdogan Just Declared His Sultanate? 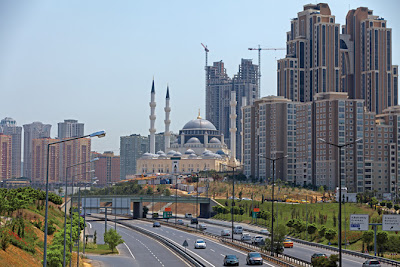 Does this mosque in Atasehir look like a tasteful tribute to the best Ottoman architect or plainly an eyesore in between tower blocks and the Istanbul highway?

Istanbul Gears Up for Ramadan Carnival

ISTANBUL ? Thousands of Istanbul mosques are getting decorated for the holy fasting month of Ramadan as carnival atmosphere prevail the city where 10 million Muslims await the holy month to get spiritually stronger. ?Fasting Muslims became more

Turkey’s Erdogan to push for Istanbul 2020 in London

LONDON (Reuters) – Turkish Prime Minister Tayyip Erdogan will travel to London for the Olympics starting next week to push for Istanbul’s bid to host the 2020 Games, bid officials said on Saturday.Istanbul is bidding alongside Madrid and Tokyo for the 2020

from Hurriyet Daily News
This year the Culture Ministry, the Ministry of Development, the Istanbul Governor?s Office, and the Istanbul Metropolitan Municipality have gathered together to create a new project to stimulate Ramadan tourism

Tours Give a Taste of Istanbul, and Beyond

from NYT > Turkey by By MEGAN GRAHAM
Istanbul Eats Walks offer visitors an insider’s tips on the cuisine of several Turkish regions.

Tours Give a Taste of Istanbul, and Beyond
New York Times
The tours are the brain child of Ansel Mullins, a Chicagoan who came to Istanbul about 10 years ago to spend what he thought would be a year abroad, and a fellow U.S. expat, Yigal Schleifer. (Mr. Schleifer has since returned to the United States but still helps

by By JESSICA BOURQUE
Tarlabasi, a low-income neighborhood that also serves as a sanctuary for Turkey’s marginalized populations, is being cleared for shopping malls and upscale housing.

Beyond the kebab ? and what you will find listed in most guidebooks for Istanbul ? lies a wide range of unique Turkish regional cuisines and restaurants with hints of Balkan, Caucasian and Middle Eastern cooking. The city has been a crossroads of numerous civilizations for centuries and, more recently, a magnet for migrants from across Turkey, with every group that has either come through or stayed put adding their ingredients to Istanbul?s culinary stew.