“After completing the series over the course of ten weeks, an anonymous letter was sent to the academy?s administration which complained about the use of the TV series as an educational tool. The letter claimed the series involved “corrupted and perverted” sexscenes and depicted Turks as “a barbarian tribe with perverted religious rituals.” 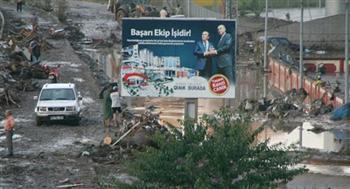 Flash Floods Kill 9 In Turkey: “Success is a team work” says in the bilboard….

from Hurriyet Daily News
A photo showing a Justice and Development Party (AKP) billboard boasting of success with a view of a flooded state-built neighborhood in Samsun became a viral sensation today.

from Kamil Pasha by Jenny White
I?ve discussed the introduction of American Bible-belt style creationism to Turkey on this blog before (see the entries under ?Science?). The Muslim version doesn?t accept that humans descended from primates, but otherwise leaves the science intact. (click here) The fundamentalist Christian version, on the other hand, is based on a reading of the Bible and claims that the earth is only 6,000 years old (so nothing like evolution would have happened; everything was created as it is now). This short-history (?young-earth?) view is not part of Islamic understanding of creation at all. Egypt, Saudi Arabia, Iran ? in none of those nations is teaching evolution a problem. God created the world. Period.

from Kamil Pasha by Jenny White
I just visited some friends who teach at a private university here in Istanbul. They were mulling over how to handle two new rules imposed by the Higher Education Council (YÖK). 1. If undergraduate students fail an exam in a class, they are allowed to take it over, and over, and over ? 2. A department may not terminate graduate students who fail. They are allowed to stick around in the department forever.

Nearly half of Turks work during holiday

from Hurriyet Daily News
Nearly half the workers in Turkey will not be able to rest thoroughly during the summer vacation, according to a survey.

An Istanbul court passed a landmark verdict to annul the demolition of the city?s historical Fener-Balat-Ayvansaray districts as part of the government?s ?urban transformation? scheme. Critics found the decision timely, unlike in the historical Roma district of Sulukule.

I offered my friend to my husband, says conservative TV host

A debate in Turkey over abortion is growing increasingly heated. But, unlike earlier controversies sparked by the Islamist-rooted Justice and Development Party?s reform initiatives, the opposing camps in the abortion battle do not necessarily fall along secular-versus-religious lines.

Turkey’s parliament has passed legislation to keep doctors from performing unnecessary cesarean births after the government claimed some doctors were seeking to earn more money by pushing women into unnecessary surgery with potentially serious consequences.