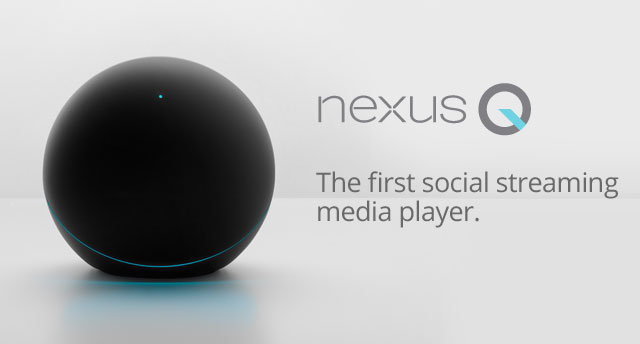 It?s Not an Entertainment Gadget, It?s Google’s Bid to Control the Future

from Wired Top Stories by Fred Vogelstein
Google’s Nexus Q is not just a gleaming, consumer electronics device. It’s also Google’s best shot at controlling the future of media, and building the most dominant software platform in a winner-take-all contest.

from Wired Top Stories by Christina Bonnington
Google updated its Google+ app for Android smartphones and tablets Wednesday with a slick new UI and new features announced at its annual Google I/O developer conference. Here’s a look at the highlights, and a hands-on with the redesigned app.

from Wired Top Stories by Jon Phillips
Google’s Nexus Q streaming-media player exudes industrial-design panache — but the clever black orb is also packed with attention to detail inside its shell. Follow along as we explain its innards in a piece-by-piece teardown.

from Wired Top Stories by Mike Barton
The virtualization firm Pano Logic is one-upping Google and its Chromebook and Chromebox cloud PC devices with its own fully (read: no local OS or PC required) browser-based desktop computing platform.

Android @ I/O: the playground is open

Last year at Google I/O, we talked about momentum, mobile and more. This year, we?re picking up right where we left off. More than 400 million Android devices have now been activated?up from 100 million last June. And twelve new Android devices are activated every every second?that?s more than 1 million a day. Today, we?re rolling out a new version of Android called Jelly Bean, adding more entertainment to Google Play, and introducing two powerful?yet distinctly different Nexus devices to bring you the best of Google.

Everything you need to know about today?s Google I/O event

by Harrison Weber
Following today?s news-packed Google I/O event, Google is now bringing Chrome Experiments to mobile devices. You can check the site out on any mobile device, including the iPhone, but we?re going to go ahead and guess that you?ll find the best experience on the new release of Chrome for Android.

Google?s Project Glass: A promise for the future, but is it a future you want?

by Alex Wilhelm
Today at its I/O event, Google blew away the crowd and over 80,000 folks on the live stream by strapping Project Glass headsets to sky divers, who jumped from a blimp, landing on the roof of the conference center. The audience watched live, from the perspective of the jumpers.

by Harrison Weber
Just days ahead of the yearly Google I/O event, Google has introduced a rather interesting live blogging tool that taps into Google+ page posts and pulls from the I/O live video feed.

Google?s new YouTube app for Android 4.0 is rolling out today

from Wired Top Stories by Cade Metz
In recent years, Google’s “infinite infrastructure” has inspired much of the tech world to move in a similar direction. Several companies — including Amazon, Microsoft, and Rackspace — have introduced “cloud services” that offer the world this sort of scalable infrastructure via the internet. But Google isn’t content to merely inspire. It wants to compete.

Google Maps may be finally feeling the pressure from open source mapping solutions like OpenStreetMap. Several high-profile companies have recently moved away from Google’s once-ubiquitous mapping service. Now, in what looks like an effort to stem the flow of defectors, the company has announced it will be charging its remaining high-traffic Maps API users less than it previously planned.

from social media vb by Talkwheel
There is an inherent catch-22 in social networks and dance floors (think of your fifth grade dances). No one will go on a dance floor (social network) unless another person is there and that other person won?t start dancing alone.

Google+: A Year of Missed Opportunities

3 Ways to Protect Your Mac From Malware

Google vs. Bing: Battle of the Search Engines

Beyond @sweden: More Country Names on Twitter are Rotating Users

The 6 Types Of Social Media Users

from social media vb by PamDyer

from Sysomos Blog by Mark Evans
Over the past week, I?ve given two presentations to groups that are not using social media or at the early stages of exploring how to embrace it.

from social media vb by JohnHaydon
The great thing about Facebook is that what works and what doesn?t work can be measured very specifically. And there?s probably nobody more experienced in the science of social media than Dan Zarrella.

Error 451: This Page Has Been Burned

from Wired Top Stories by Scott Gilbertson
The newly proposed 451 error code would let you know when a webpage has been censored. The homage to Ray Bradbury is clear, but whether or not Error 451 will ever be used is not.

Regimes chase to rule the internet

from The Blog
The internet has become an eyesore for the several governments that are being threatened by dissidents and newly-emerging ?net-activism? and/or more recently ?hack-activism?, which has taken to the streets globally.

It’s the 100th birthday of codebreaker Alan Turing this week, and to celebrate geek-style, WiredUK is running a contest with a cipher that needs busting. Call it the Turing test, if you will.

A simple timeline of the achievements of Alan Turing, the great mathematician, World War II hero, computer scientist and visionary.

from Wired Top Stories by Scott Gilbertson
Just over 7 years ago one of HTML’s most successful extensions was born. Today over 70 percent of sites using structured data are using Microformats, including big names like Yahoo, LinkedIn and The New York Times.

Yandex expands global search index from 4 billion to ?tens of billions? of pages

Zynga has announced Zynga With Friends, a consistent social lobby for all of its players, across devices and platforms.

Google?s +1 button will now deliver suggested content to readers of your site when hovered over

How crowdsourcing is taking root in Latin America

Mars vs. Venus on the Internet ? Study shows increasing differences in use

Pirate Bay Founder Fined For ?Continued Involvement? In The Site

from Wired Top Stories by Robert McMillan
Apple has made a small change to a Mac marketing webpage that is a big deal to people who care about computer security. We’re talking about the “Why you’ll love a Mac” webpage. For the past couple of years, Apple has claimed that the Mac “doesn’t get PC viruses,” adding that “a Mac isn?t susceptible to the thousands of viruses plaguing Windows-based computers.” That’s a tough one to argue with. After all, Windows software doesn’t work on the Mac operating system. But now, it’s a claim that Apple doesn’t seem comfortable making anymore.

Proxy Your Way to Online Anonymity

from Wired Top Stories by How-To Wiki
Whatever your reason for desiring anonymity, you’ll find it hard to make yourself truly traceless on the web. Here’s how to set yourself up for backdoor browsing using a proxy server.