from Yahoo news
Fighting between Kurdish rebels and government troops in southeastern Turkey left more than two dozen dead Tuesday, according to reports from officials and a news agency. 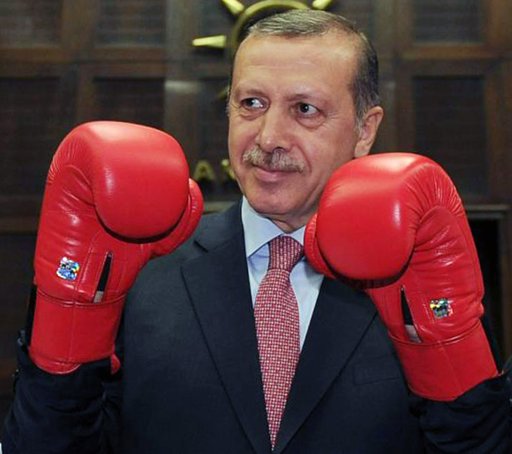 Turkey’s Prime Minister Recep Tayyip Erdogan poses with boxing gloves to lawmakers and supporters of his ruling Justice and Development Party at the parliament in Ankara, Turkey, Tuesday, June 12, .2012

The choice is up to Gülen, says Turkish PM

from Hurriyet Daily News
Turkish Prime Minister Recep Tayyip Erdoğan has said the choice on whether to return or not return is up to the Islamic scholar Fethullah Gülen himself.

I will not return, says Gülen

from Hurriyet Daily News
Islamic scholar Fethullah Gülen has rejected Prime Minister Recep Tayyip Erdoğan?s call for him to return to Turkey on the grounds that it could risk many of the achievements his movement has made.

The politics of a Kurdish Icon

from Hurriyet Daily News
Leyla Zana is one of the most respected Kurdish political figures. She has been a symbol of the Kurdish struggle for freedom

from Hurriyet Daily News
The main opposition has formed a shadow Cabinet whose shadow ministers plan to keep a closer eye on the government?s policies.

from Hurriyet Daily News
Everyone says that Turkey?s absolute ruler Recep Tayyip Erdoğan has become a cunning politician who has been doing politics ..

The new and the old CHP fights

from Hurriyet Daily News
Turkey?s ruling and main opposition parties can positively contribute to a solution to the Kurdish issue, the prime minister said yesterday.

by Yavuz Baydar
Can it be said that the Republican Peoples? Party (CHP) at the most unexpected time came to Recep Tayyip Erdoğan?s rescue? Not that Turkey?s prime minister would reject an extended hand on the toughest issue he faces, but certainly what Kılıçdaroğlu, his main opponent, offered in terms of a ?roadmap for a Kurdish solution? was a relief for him, long under the strain of an open wound called Uludere. ?Parliament — it is where the solution must come from —

A case for Turkey’s special courts

from Bosphorus Diary by Yavuz Baydar
Suzanne Geske is the widow of Tilman Ekkehart Geske, who was brutally murdered, along with two other missionaries, in the city of Malatya on April 18, 2007, where he was a prominent religious activist working at Zirve Publishing House. Speaking to the Taraf daily yesterday, she remarked: ?I am happy about the second indictment. I have actually never lost hope. We have always known that Emre Günaydın and his accomplices, who conducted this murder, were used. Our constant demand has been that the names of the instigators be exposed. With this indictment it was done. We do not want the young ones to be used like this any more. Our only wish and aim is justice.?

from Today’s Zaman, your gateway to Turkish daily news :: Columnists by DOĞU ERGİL
I wonder whether the climate for a solution to the gangrened ?Kurdish problem? is more favorable now than it was during the declaration of the ?democratic opening? of the government a few years ago? There was a new government (the Justice and Development Party [AKP]) in power that owed little to the state-centered system it fought to win the elections. Its resolve to dismantle the tutelary system that was the mother of all ills, including the so-called ?Kurdish problem,? was awe-inspiring. All segments of society were full of joy and hope.

1 thought on “Whenever there is talk of peace in Kurdish issues, acts of terror emerges.. a politics roundup…”