from euro|topics
The Euro Group finance ministers met on Monday in Brussels to discuss crisis-stricken Greece and spoke out against Greece exiting the Eurozone. But Greece’s withdrawal could help the country’s economy back on its feet, some commentators say, while others fear the move would have a domino effect on other ailing economies in southern Europe.

Greece in complete denial: The failure of the political system

from Blogactiv by Protesilaos Stavrou
I have been ruminating recently on the key questions that divide Greek society over the economic crisis; the issues that raise controversy among political parties; the actual steps that need to be made for the country to finally move from here to there; from near disintegration, to a stable state where the common good will prevail over short-sighted party politics. What I have realized is that the core issues have not been addressed, in any comprehensive sense. Instead the debates are confined within sterile exchanges of competing slogans and other attention-getting devices, which lack content. Not a single party has ever presented a coherent strategy of the steps to be followed henceforth. I am not speaking of any particular orientation, pro-memorandum or anti-memorandum, pro-EU or anti-EU, neoliberal or socialist etc. I am referring to the complete absence of any viable proposals to the Greek people, of feasible alternatives.

from euro|topics
The Social Democrats (SPD) have won a clear victory in the election of the new parliament in the German state of North Rhine-Westphalia with 39.1 of the vote. With just 26.3 percent Merkel’s Christian Democratic Party (CDU) had its worst ever result in this key state. The election is a blow for Angela Merkel and endangers her austerity policy, some commentators write, while others believe the chancellor will emerge unscathed from the debacle.

All over Europe: from Pirates to Le Pen, Nick Pearce

from open Democracy News Analysis – by Nick Pearce
We are not arriving at a moment of choice between socialism and barbarism. Nonetheless, centre ground parties will repeatedly fail unless they can offer new solutions to the economic problems Europe faces. And there are new political players asking if updates are available for this system.

How Hollande should handle Merkel

by Centre for European Reform
By Charles Grant

The election of François Hollande as French president has excited some of those who blame Germany?s emphasis on fiscal austerity for many of the eurozone?s ills. Hollande has promised to refocus EU policies on growth and employment. Countries such as Greece, Portugal, Spain and Italy ? their recessions aggravated by the EU?s insistence that they shrink their budget deficits ? would welcome a new approach. Even Marios Draghi and Monti, respectively president of the European Central Bank and prime minister of Italy, and both economically conservative, have called for growth initiatives. But can Hollande ? as he prepares for his first ever meeting with Chancellor Angela Merkel ? really make a difference? He might, but only if he handles Merkel with great diplomatic dexterity.

Chancellor Angela Merkel’s conservatives suffered a crushing defeat yesterday (13 May) in an election in Germany’s most populous state, a result which could embolden the left opposition to step up attacks on her European austerity policies.

France After Sarkozy: What Can Hollande Do? 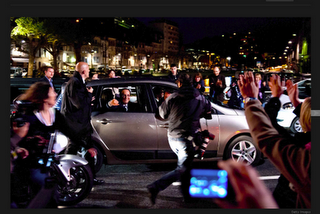 Nicholas Sarkozy came to power five years ago heralded as France’s New Man who would yoke France to global capitalism by separating it from its social model.  He jogged and he paddled New Hampshire canoes without his shirt.   I thought then that it would turn out badly, and it has.  The new Socialist president François Hollande faces a mess when he steps out of his democratically little car.

Four out of five Greek voters still committed to the euro: Will the Greek anti-austerity parties blink first?

by Open Europe blog team
Over on the Telegraph blog, we argue:
There?s a paradox at the heart of the Greek euro debate: voters have comprehensively rejected EU-mandated austerity ? parties that are (more or less) in favour of ripping up the bailout conditionsmustered 68pc of the votes. And yet, according to a new poll, 78pc of Greeks are still in favour of the new government doing ?whatever it takes? for the country to stay inside the Eurozone.

from Global: Henning Meyer | guardian.co.uk by Henning Meyer
Europe can learn from the victory of Social Democrats offering Germans not austerity but sensible fiscal policies
The recent elections in North-Rhine Westphalia (NRW) have produced a great result for the German Social Democratic party (SPD) and a crushing defeat for Angela Merkel’s Christian Democrats (CDU). After a dozen years, and with a vote share of 39.1%, the SPD has re-emerged as the strongest party in Germany’s most populous state. The CDU, on the other hand, suffered losses of more than eight percentage points and ended up with 26.3%, the party’s worst ever result in the state. After two years of red-green minority government, there is now a clear majority for the region’s minister-president, Hannelore Kraft, to continue.

from open Democracy News Analysis – by Francesca E.S. Montemaggi
European politicians are seeking to follow the moods of the public rather than to shape them. Europeans do not want Europe to fail, but Europe cannot rest solely on the actions of the German Chancellor, the French President, or the President of the European Central Bank.

from Project Syndicate by Martin Schulz
François Hollande?s victory in the French presidential election is a fresh chance for Europe. It should spell the end of a policy oriented exclusively towards austerity, which has paralyzed our economies and divided the EU, and should not scare anyone ? certainly not the financial markets.

In Europe, the extremists go mainstream

from washingtonpost.com – Op-Ed Columns by Anne Applebaum
Congratulations are due to the new president of France: Francois Hollande finished off Nicolas Sarkozy on Sunday with a few percentage points to spare. Congratulations of another sort are due to Syriza, also known as the Coalition of the Radical Left, a party that made major gains in Sunday?s Greek parliamentary elections, as well as Golden Dawn, a party whose symbol looks like a swastika and whose candidates earned enough votes to enter the Greek Parliament for the first time. Further congratulations perhaps ought to be sent to the Dutch politician Geert Wilders, whose decision to withdraw the support of his anti-Europe, anti-immigration party from the ruling coalition brought down the Dutch government a few days ago.

Francois Hollande earns praise from the left and caution from the right as media react along partisan lines.

from Project Syndicate by Joseph E. Stiglitz
So many economies are vulnerable to natural disasters ? earthquakes, floods, typhoons, hurricanes, tsunamis ? that adding a man-made disaster is all the more tragic. The pain that Europe, especially its poor and young, is suffering as a result of its leaders? willful ignorance of the lessons of the past is entirely unnecessary.

from Project Syndicate by Michel Rocard
Francois Hollande?s defeat of Nicolas Sarkozy is a challenge to France, to Europe, but most of all to Hollande. With a growth agenda needed to revive the EU economy, Hollande must convince Germany that its exclusive focus on austerity has put Europe on the wrong path.

from Project Syndicate by Noëlle Lenoir
France’s incoming president, François Hollande, is untested in foreign policy. But, as a committed internationalist whose top priority is Europe, he will opt for continuity with Nicolas Sarkozy’s outgoing administration on almost every major issue, including close cooperation with the US.

from AL JAZEERA ENGLISH (IN DEPTH)
What are the repercussions of this far-right party gaining several parliamentary seats in the country’s election?

from FT.com – World, Europe
With an exit looking possible, policymakers and investors are shifting focus to the consequences, write Chris Giles, Peter Spiegel and Kerin Hope

Electoral rejection of ?the Narrative? tests Europe?s commitment to democracy

from WhirledView by John C. Dyer
Electoral rejection of ?the Narrative? tests Europe?s commitment to democracy
By John C. Dyer, UK Correspondent
9 May 2012.
Elections in the UK, France, and Greece 3 May and 6 May made clear, the voters have had ?enough? of the prevailing ?Narrative? undergirding ?austerity? and ?competitiveness.?

French elections: what does normal stand for?

from Reset Dialogues on Civilazations
The vote for Hollande is not so much as a radical desire for change as a possibly illusory desire to go back to the pre-crisis period. The socialists, however, have also opened up a new alternative approach to the economy. But ?racism from above? has led the way on this historic fight over what is normal.

Nine out of ten: the losers of Italy’s long crisis, Mario Pianta

from open Democracy News Analysis – by Mario Pianta
Every ultra-rich person has the income of 100 poor people. But this is not Dickensian England or Depression-era America. It is the Italy of today. Halting the rise of the super-rich will be a crucial issue for the politics of the future.

from euro|topics
The formation of an expert government in Greece failed on Tuesday, prompting President Karolos Paoulias to call new elections for June. According to commentators, the elections will effectively be a referendum on whetherGreece stays in the Eurozone unless Syriza boss and anti-austerity politician Alexis Tsipras finally decides to make some compromises.

from open Democracy News Analysis – by Izolda Takacs and Tamas Dezso Czigler
If we want to develop effective co-operation within and among the member states of the EU, history should be kept at a distance. Living in the past is not feasible, and this is equally true for Euro-scepticism, the application of human rights as well as the fight against racism and extremism.

from Ideas on Europe by Ronny Patz
I?ve been at the EBD post-Council debriefing in Berlin today (Chatham House rules), trying to get a wider and a more German perspective on the ongoing reforms of the Common Agricultural Policy (CAP) and the Common Fisheries Policy (CFP).

Is the ECB trying to push Greece out of the euro? We?re not so sure?

by Open Europe blog team
A story seems to have taken hold today that suggests the ECB may be indirectly trying to push Greece out of the euro by reducing its liquidity support to its banks which, the theory goes, would threaten a banking collapse and cause Greece to leave the euro in order to use its own central bank to support its banks. This seems par for the course with many of the headlines doing the round at the moment, but after some further inspection we’re not certain that any decrease can really be seen as the ECB trying to force Greece out.

Michel Barnier and the future of the French right

from Brussels Blog by Peter Spiegel
In our interview published today with Michel Barnier, the silver-haired Frenchman who oversees the EU?s financial system, he talks in great depth about the future of banking regulation and his relationship with François Hollande.

In case anyone wondered about the state of the euro

In a speech to business leaders in the North West today, Cameron will say:

A quick roundup of interesting stuff about the Eurozone / Greece

The bottom line remains this: Greece leaving the Eurozone will have catastrophic economic consequences for Greece and the rest of the EU. That is as true now as it was a year ago. Everyone from Syriza to Juncker understands this.