No chapters likely to be opened until 2013

from Hurriyet Daily News
Despite the positive climate between Turkey and France following the French presidential elections, Ankara will likely have to wait until 2013 before it can speed up negotiations with the European Union, due to a tight calendar.

EU should give new dynamism to Turkish bid: Westerwelle

from Today’s Zaman, your gateway to Turkish daily news :: Columnists by LALE KEMAL

Turkey and the European Union have invented a new term, ?positive agenda,? which describes the beginning of accession negotiations in one of the stalled chapters. However, they will refrain from using the word ?negotiations? to bypass the Greek Cypriot veto of Turkey. Through this new policy, Turkey and Brussels will try to avert a possible political crisis that may erupt when the Greek Cypriot government takes over the rotating EU presidency for six months starting July 1. Turkey has threatened to freeze diplomatic relations with the EU if there is no deal in the UN-brokered peace talks on thereunification of Cyprus by the time the Greek Cypriot administration takes the EU presidency.

François Hollande and the Turks

MAXİME GAUİN
There is a historical trend in the main Socialist leaders of France alternating their attitudes vis-à-vis the Turks, especially if the Armenian question is involved. Jean Jaurès (1859-1914) diffused the Armenian nationalist propaganda in the 1890s, in ignorance, then met the Young Turks and became, until his death, their loyal friend. The first years of François Mitterrand?s presidency were marked by a serious crisis (1981-1984), but it was very quickly resolved and followed by years (1985-2000) of good relations. 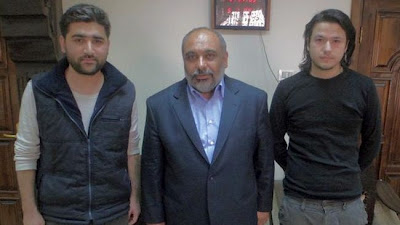 Two Turkish journalists, who were jailed by the Syrian regime, were released on Saturday after two months of imprisonment, as part of what appears to be a prisoner swap between Turkey and Iran through intermediaries in Syria.

from Yahoo news
As Francois Hollande drives through Paris to his inauguration today, he should add an item to his daunting list of priorities as president of France: End his country?s block on Turkey?s talks to join the European Union, and do it soon.

from Today’s Zaman, your gateway to Turkish daily news :: Interviews
It was not a coincidence that ?le changement, c?est maintenant,? the campaign slogan of Françoise Hollande, who won a landslide victory in the French elections, which literally means ?change now,? or ?time for change,? was used by Le Monde in its headline to draw attention to relations between France and Turkey.

from Hurriyet Daily News
Genel Energy with Turkish partners, extends its presence in northern Iraq with a $175 million contract to search for oil.

from Today’s Zaman, your gateway to Turkish daily news :: Columnists by CENGİZ AKTAR
Former President Sarkozy was the least liked leader of the Fifth French Republic since 1958. There were many reasons for people to hate him. In addition to his arrogant, offensive, sarcastic personality and extremely personalized management style, Sarkozy was never successful in any of the issues that required reform. In Western European countries like France, the tradition of the welfare state has encountered difficulties in adapting to globalization. Everybody agrees that there is need for a thorough overhaul of the administration of health, retirement, education, immigration, the environment and the economy and for new vision and policies in all these fields. However, diagnosis is different from offering proper and workable policies. Sarkozy has shattered the existing systems but failed to build new ones. He shook the foundations of the major institutions but failed to renew them. As he left his initiatives unfinished, domestic and international opposition to his style grew further.