Tens of thousands of workers take to the streets for annual marches, demonstrating against government spending cuts and rising unemployment

How real is Hollande’s veto threat? 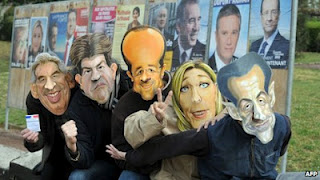 As has been widely reported, Francois Hollande – the socialist contender for the French Presidency – gave amajor speech yesterday. Unsurprisingly, there were a few points thrown in that won’t go down particularly well in Berlin or Frankfurt. Perhaps most interestingly, in reply to a journalist?s question on the EU fiscal treaty, Hollande answered,

from Global Voices Online by Jenny Sin
While the French are preparing to choose a president in the upcoming weeks, French voters overseas and the foreign online media have reacted as the first round poll came to an end. Some peculiarities of the French electoral process, such as the ban on posting polling estimations in the media before 8 pm on election day, were intensely debated.

European countries are discriminating against Muslims for demonstrating their faith…

from open Democracy News Analysis – by Nicolas Lebourg
Nicolas Lebourg continues (see part one) to explore how the Toulouse events contributed to shaping Marine Le Pen?s electoral strategy. While it is dubious that Islamophobia played the most decisive part in her latest presidential score, she placed it on the top of the political agenda for the second round.

from open Democracy News Analysis – by Bedrudin Brljavac
‘Europeanization’ is not just an effect of EU membership: it applies to aspiring countries too, especially those with post-conflict identity struggles, like Bosnia and Herzegovina
The process of extreme identification with different ethnic groups radically intensified after the end of the Ottoman regime in the Balkans. The emergence of an international system of states based on the idea of “the nation” at the end of the 19th century resulted in growing debates about national identity.

from euro|topics
EU Commission president José Manuel Barroso announced on Monday that he will stay away from the Euro 2012 in Ukraine as long as constitutional principles are violated there. Many politicians of European countries, however, have rejected the idea of a Euro 2012 boycott. Commentators find the idea ineffectual and the discussion surrounding it hypocritical.

from Public Affairs 2.0 by fhbrussels
As we have explored numerous times in this blog over the years, the Internet is increasingly shaping political discourse, public scrutiny over elected representatives and our democratic life in general. The upcoming French parliamentary elections are proving once again that e-citizenship is gaining ground fast; for some this year, computers will replace the traditional ballot box.

from open Democracy News Analysis – by Milan Marinkovic
Serbia has made little progress in its push for European integration in the time available. And whlie Belgrade is complacent about this, Brussels is lenient, knowing that an integrated Serbia is necessary for stability in the region

The Fundamental Right Agency (FRA) together with the European Institute for Gender Equality (EIGE) is launching a survey on women?s well-being and safety in Europe. The survey?s aim is to collect comprehensive data about domestic violence among 40,000 women who will be interviewed. The survey will focus not only on the experience of violence but also on the background (migration, minority, nationality) of the interviewees, as well as their disabilities. Posing those additional questions will help to identify the most vulnerable groups.

The EU and the NHS: the long arm of Brussels

by Open Europe blog team
Yesterday we had two reminders of how far the EU’s power reaches into the workings of member states. In this case, we’re talking about the National Health Service.

from FT.com – World, Europe
From the moment Marine Le Pen won almost 18 per cent of last Sunday?s vote, the question of who her 6.5m supporters would choose became vital to the outcome

from The European Citizen by Eurocentric
Merkel’s intervention in the French elections yesterday – effectively attacking Hollande by stating that there will be no renegotiation of the Fiscal Stability Treaty – strikes me as bizarre. If she’s hoping that this will discredit Hollande and lead to voters voting Sarkozy, I can’t see how it will work (will those who voted for the far-right be more willing to vote for the candidate closest to German policy, or the candidate who is almost setting himself up as the leader of an anti-German leadership alliance?).

from Social Europe Journal by David Lizoain
The bad news in Spain continues unabated. 15% of all jobs have now been destroyed since the start of the crisis.

from FT.com – World, Europe
Madrid risks having to support its banks, but a more chilling drama is playing out across the Pyrenees

Frelections: a round-up between the rounds

from A Fistful Of Euros » A Fistful Of Euros by Alex Harrowell
No need to guess what?s got the headlines. Mediapart published what purports to be a document demonstrating that (as has been repeatedly rumoured) Libya offered Nicolas Sarkozy a substantial sum of money (?50 million) for his 2007 campaign. The finances of Sarkozy and the broader French right are a deep dark subject, as the continuing Karachi affair makes clear ? the treasurer of the 1995 Balladur campaign just described how they concealed large donations in used banknotes. Of course, the campaign manager was none other than Nicolas Sarkozy. Quite a few of the same personalities involved also turn up in the note. It?s not clear, even if the document is genuine, if the money was ever paid out, and its addressee denies ever receiving it. Meanwhile, the arms dealer Ziad Takieddine, who shows up in the whole range of scandals, says he was refused entry to France in the hope of preventing him from producing the document.

The deep structure of the European crisis, Ferenc Miszlivetz

from open Democracy News Analysis – by Ferenc Miszlivetz
Instead of deepening integration, the famous Franco-German engine now represented by the Merkozy-Sarkel tandem has brought the EU to the fringe of disintegration. Where does the road lead from here? Will Europe combust, as some of its rivals and adversaries hope and suggest – or are there options and alternatives for reinventing itself ?

The colours of disintegration: interpreting the 2012 elections in Greece, Iannis Carras

from open Democracy News Analysis – by Iannis Carras
Economic depression is as ever a catalyst for change. This map of the terrain launches a series of analyses of the Greek elections and their European ripple effect, as the two parties that have dominated Greek politics since the downfall of the Junta face a ?shellacking? and the far right waits in the wings

from euro|topics
According to media reports, German Chancellor Angela Merkel plans to call on members of her cabinet not to attend the Euro 2012 football matches in Ukraine in the event that former Ukrainian prime Minister Yulia Tymoshenko is still in jail when the competition kicks off at the start of June. Such a boycott could help the cause of democracy in the country, write some commentators, while others fear it will only push Ukraine into Moscow’s open arms.

A few comments on Euroblogging

Polscieu has written many interesting posts on the state of the Euroblogosphere from the lack of linking between blogs to the language barrier when it comes to reaching wider audiences. These are big issues that surface from time to time ? I was amongst a few bloggers who tried to make a bigger commitment to communicating across the Blogosphere borders (between national blogospheres) and linguistic borders.

Why France is threatening to leave Schengen

by Centre for European Reform
by Hugo Brady

Nicolas Sarkozy appears ready to send the EU’s Schengen area to the guillotine in order to win re-election to the French presidency. Last week, Claude Guéant, France’s minister for the interior, was despatched to a meeting of his EU counterparts in Luxembourg with a stark warning: Schengen’s common border ? which stretches from the Baltic to the Mediterranean to the Aegean ? must be secure by the end of 2012. Otherwise, France will leave the 26-country passport-free zone, or so says Sarkozy on the stump.

Welcome to the Preview for the Second Semi-Final of the Eurovision Song Contest, if you missed Semi 1 it?s here! I will of course be making a prediction, which will most likely be wrong!

from open Democracy News Analysis – by Patrice de Beer
The first round of France?s presidential election leaves the incumbent president, Nicolas Sarkozy, in a tight corner. Its result also presages a longer struggle over the future shape of the country’s political right, says Patrice de Beer.

Sneaking in on the Franco-German axis (without lecturing)

by Open Europe blog team
La Repubblica yesterday claimed that Italian PM Mario Monti sees opportunity in a Francois Hollande victory in the French Presidential elections. The opportunity lies not so much in Paris as in Berlin.

Monti reportedly thinks a Hollande victory would weaken French ties with Germany, over issues such as the role of ECB, the fiscal treaty and government spending. Berlin will look for allies, so the logic goes, which presents a chance for Rome to “sneak in”. La Repubblica’s interpretation is that Monti wants to “replace” Sarkozy – or at least the role Sarkozy currently plays in the Franco-German axis.

from The European Citizen by Eurocentric
The referendum campaign on the Fiscal Stability Treaty is underway in Ireland. The main argument on the No side is that the treaty would impose endless austerity that would have to continue even after the bailout has expired, whereas the Yes side claims that if we don’t ratify the treaty, we won’t have access to the ESM (“Stability Mechanism”) and we cannot count on the IMF for funding, meaning that a No vote leaves Ireland’s means of funding itself uncertain.