An Introduction to the Films of Peter Greenaway: Three Early Shorts 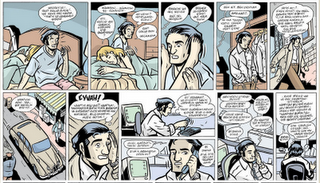 Having high hopes that it is possible to capture the atmosphere and humor of this fantastic comic series. Otisabi by Yilmaz Aslanturk [1]…Finally a TV series.

The irrepressible rise of the cinema sector

from Hurriyet Daily News
As the 31st Istanbul Film Festival is putting its spell on Istanbul residents, ?Magnifica Presenza,? the latest film of the …

from BBC News | Europe | World Edition
How much have the movies got wrong about the Titanic?

from Kamil Pasha by Jenny White
For some reason, ?Fetih 1453? is playing in Burbank (and only there). I?m in LA to give a talk, so I dragged an American friend to the movie, anticipating a sell-out blockbuster (how many Turks are in LA?). The theater had six people in it when we arrived; later a few more trickled in, a few Turks among them. I had read that the movie has been attracting enthusiastic crowds and is hyped as having high production values ? Turkey?s first major motion picture in the Hollywood mode. Well, I agree, only it?s the Hollywood of the 1940s and 50s, with added digital multiplication of soldiers so that they extend like grass to the horizon. Ben Hur in leather and gauzy turban?

from World news: Turkey | guardian.co.uk by Fiachra Gibbons
The turbans-and-testosterone CGI retelling of sultan’s conquest of Constantinople feeds on appetite for imperial Ottoman past
It’s the film that is making millions of Turkish hearts swell with even more patriotic pride than usual. Fetih 1453, a turbans-and-testosterone epic, has not just smashed all Turkish box office records with its all-action, CGI retelling of Mehmet II’s capture of the old Byzantine capital, Constantinople, it is being hailed as a reaffirmation that a resurgent Turkey still has world-conquering blood in its veins.

Cultural Exchange: Turkish film ‘Fetih 1453′ stirs nationalism
The movie has been hugely successful in its home country since its premiere, telling of the Turks’ defeat of the Byzantine capital, but critics say it glosses over the sordid details.