Is Twitter Trying to End the Tech Patent War?

from FP Passport by Joshua Keating
The first episode of Julian Assange’s new TV show, The World Tomorrow, premiered on RT today with Hezbollah leader Hassan Nasrallah as the first guest. Aside from a quick intro and a goofy theme song by M.I.A., it’s a pretty spartan affair, consisting solely of Assange and his translators speaking with Nasrallah over skype. The newsiest quote was probably Nasrallah’s fairly staunch defense of Bashar al-Assad’s crackdown on protesters:

SOPATrack: an app to show connections between campaign donations and voting records

by Cory Doctorow
Smita sez,
While there are many resources out there to help citizens learn more about how much money gov’t officials are accepting from special interest groups, I wanted to call out SopaTrack as it is the first of its kind that enables people to easily and quickly look up how elected officials are voting on a particular issue, enabling voters to be more educated and aware as they hit the ballots. For this broader issue and problem, for the first time, there is an app for that 🙂 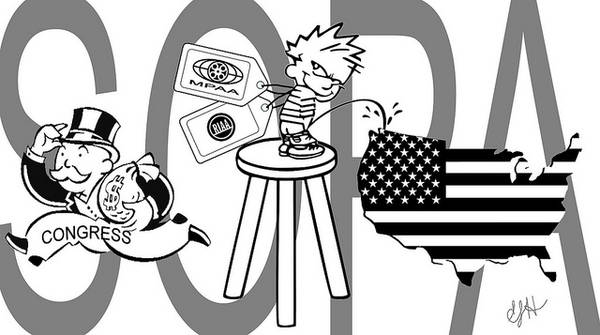 My latest Guardian column is “Why did an MPAA executive join the Internet Society?” which digs into the backstory on the appointment of former MPAA CTO Paul Brigner as North American director of the copyright-reforming, pro-net-neutrality Network Society group, which manages the .ORG domain name registry.

Google?s Sergey Brin: My Views on Internet Freedom Were Distorted

Inventor of the Web: The Internet is bigger than the music industry

from Boing Boing by Cory Doctorow
Web inventor Tim Berners-Lee, on copyright legislation and the Internet: “Record labels have a very strong voice when it comes to arguing for their particular business model, which is in fact out of date. The result is that laws have been created which make out as if the only problem on the internet is teenagers stealing music. The world is bigger than that. The internet is bigger than the music industry. The economic impact of the internet is bigger than the music industry. [The entertainment industry musn’t] take away the rule that you should only punish someone after appropriate court proceedings.”

Tim Berners-Lee, creator of the Web, has publicly decried the UK government’s plan to introduce an Internet spying bill that allows for warrantless, real-time surveillance of the nation’s clicks, email and other online communications.

Reporter Who Tracked Kony in Africa Answers Questions on Reddit

by Stephanie Haberman
Newsweek reporter Scott Johnson just returned from a trip to Africa, where he traveled with the Ugandan army and went hunting for Joseph Kony.

from Wired Top Stories by Jakob Schiller
The video calling for a national campaign to raise awareness about Joseph Kony, the International Criminal Court’s #1 most-wanted warlord, has been viewed more than 100 million times since it was published on March 5. The day of action it calls for is tomorrow, April 20. While most people agree that Kony should be brought to justice for his crimes against the Ugandan people and children, the video has come under criticism for oversimplifications that could actually do harm to the people it aims to help.