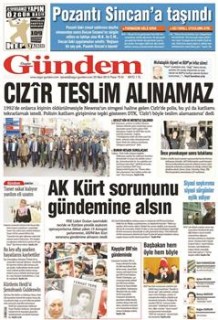 Will the Halki Theological School be opened?

from Today’s Zaman, your gateway to Turkish daily news :: Columnists by ORHAN KEMAL CENGİZ
I divide Turkey?s minority policies in the republican period into two parts. The first part, which started in 1923 with the founding of the Turkish Republic, ended in 2002 when the current government came to power and a fait accompli strategy was vigorously applied.

Facing E-coup Charges, Başbuğ Makes Show of Defiance in Court
Journal of Turkish Weekly
Başbuğ reportedly said the trial was ?frivolous? and left the courtroom after the court had him listen to a phone recording between Ergenekon suspects İbrahim Şahin and Fatma Cengiz, in which the two allegedly talk about him (Başbuğ).

from Hurriyet Daily News
Turkey’s former Chief of General Staff, Gen. İlker Başbuğ, has left the courtroom where a hearing of the ongoing ‘Internet Memorandum’ case was being held today.

from Hurriyet Daily News
Police used pepper gas and one fan?s foot was broken as Fenerbahçe fans welcomed the women?s.

from Hurriyet Daily News
Turkish Minister of Justice Sadullah Ergin says they are preparing a series of reform packages on freedom of..

from Hurriyet Daily News
New regulations to prevent the closure of media publications and broadcasts are on the way, the Justice Ministry said yesterday in a press statement.

A ?new approach? to the Kurdish issue: a road leading nowhere

from Journalist in Turkey, background articles, news and weblog about by Fréderike Geerdink
I have not been blogging for over a week. I have been uncertain what to blog about. Recently I have written a lot about oppression of Kurds, and I felt I needed more variety in my subjects. So I was pondering what to write about. But today, I decided to give up. I?m a journalist;

Detained for 4.5 Years Because of a Lost Radio

from Bianet :: English
Ten people, among them also students, have been detained for 4.5 years by reasons of a lost police radio and contradictive police statements. Five of the detainees were eventually released on 27 March, the others will have to wait for the next hearing in three months time.

from Journalist in Turkey, background articles, news and weblog about by Fréderike Geerdink
ISTANBUL ? The controversial shampoo ad with Adolf Hitler in the leading role will immediately be taken off the air in Turkey, the head of the advertising agency that produced it announced on Tuesday. The company is stopping the campaign because it caused great anger in Turkey?s Jewish community of about twenty thousand people. Hitler

from Bianet :: English
The 24 March issue of the weekly Atılım newspaper was confiscated on the grounds of “making propaganda for an illegal organization”. Also the issues from 3 and 10 March were seized for the same reason.