Turkey’s justice minister says 200 inmates will be moved from a juvenile prison following allegations of mistreatment by prison officials there and sexual abuse by fellow inmates. 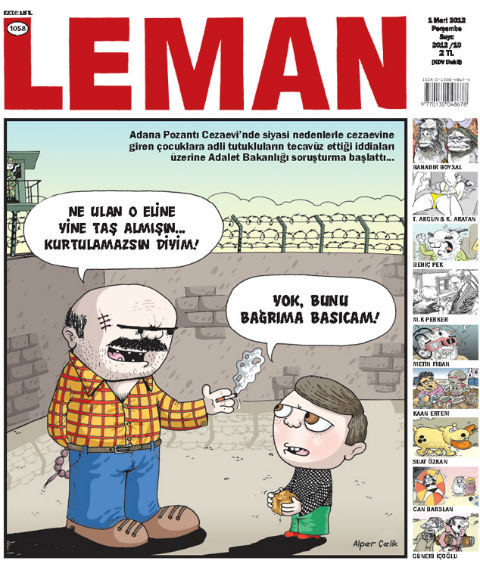 Alevi citizens concerned with mark on their doors

Markings that were found on the doors of Alevis? houses in the eastern province of Adıyaman are mere ?child?s play? and not a premonition of an attack, Interior Minister İdris Naim Şahin has said.

A group of Turkish artists from various disciplines, called ?Artists? Initiative,? launched a petition campaign yesterday to protest against the government.

Minority?run papers to get official support

A decision to allow Turkey?s minority?run newspapers to take a share of official bulletins and announcements that authorities pay publications to print has come into effect, with the new amendment published in the Official Gazette Feb. 28.

One Year On, Prominent Turkish Reporter and IPI World Press Freedom Hero …
Hetq Online
Authorities say the website acted as the media wing for the so-called ?Ergenekon? plot, in which secularists and ultra-nationalists allegedly planned to use terrorism to overthrow the government of Turkey’s ruling Justice and Development Party (AKP

A bizarre rally took place in Istanbul last weekend. The declared purpose was to commemorate the 20th anniversary the Khojaly Massacre .

from Today’s Zaman, your gateway to Turkish daily news :: Columnists by ORHAN KEMAL CENGİZ
In 1992, hundreds of Azeris were massacred in the town of Khojaly by the Armenian forces during the Nagorno-Karabakh War. Women, children, elderly, they all were brutally killed. It is very unfortunate that Armenia still refuses to confront this dark page of its history.

Çiçek warns against xenophobia in Europe

Parliamentary Speaker Cemil Çiçek has warned that racism, xenophobia and Islamophobia have escalated…

“Pozantı Prison Management should be Dismissed”

from Bianet :: English
Istanbul Deputy Tuncel demanded to depose the management of the Pozantı Prison from office. İHD Branch Chair Tanrıverdi told bianet that the Parliamentary Human Rights Commission confirmed that the prison was not suitable for children and juveniles.

Some 788 members of the security forces have been killed in terror-related clashes and attacks since.

Conscientious objector Savda was arrested and taken to prison upon the approval of a five-month prison sentence on charges of “alienating the public from military service”. Amnesty International Turkey and the Human Rights Foundation condemned his arrest.

from Hurriyet Daily News
Grup Yorum introduced the posters a week before, but they were not allowed, said organizer Zafer Çetin, at the top.

The PKK and the ?Child Soldiers?

from Hurriyet Daily News
Turkey has been struggling with the outlawed Kurdistan Workers? Party (PKK) for a long time. The question has, of course, political .

Fighting to remain relevant? The PKK in 2012, Franco Galdini

from open Democracy News Analysis – by Franco Galdini
As a result of the crackdown on the Kurdisk PKK by the Turkish government the organisation has lost much of its popular support. In the light of the Arab Spring and growing tensions between Turkey and its neighbours the PKK might strive to regain support through its old habits of violence, or try to emulate the popular resistance movements

Indictment of ‘Masterminds’ of Murders in Turkey Expected
Christian Post
For the last five years, plaintiff lawyers have argued there is overwhelming evidence that the Malatya murders were connected to Ergenekon, a hidden network within the state alleged to have plotted crimes to destabilize the government.

Khojaly Massacre Protests gone wrong in Istanbul: ‘ You are all Armenian, you …
National Turk English
Istanbul / NationalTurk ? Shameful slogans and signs marked and besmirched the anti-Armenian protests in Istanbul on the anniversary of Khojaly Massacre, when Armenian troops rushed into the village of Khodzhaly on Feb.

from Bianet :: English
Murat Polat died as the result of torture in a military prison during his military service in 2005. 30 soldiers were tried, among them also commanders. At the end of the trial, one private was sentenced to imprisonment

Again not Women but the Family is Protected

Academic Ayata from the Bilgi University Human Rights Law and Research Centre evaluated the amendments of the law against violence against women for bianet: “Even the gains of the current law have been taken back”

Preceding the international Women’s Day on 8 March, the Huni Project launched the “We give ourselves black eyes to stop violence against women” campaign on facebook. The participating users’ profile pictures will be exchanged by photographs with black eyes.