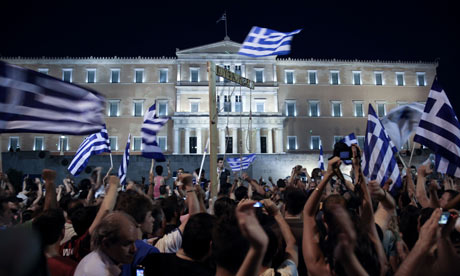 will continue to hinder the country?s prospects. Image source: The Guardian

from FT.com – World, Europe
Eurozone finance ministers poised to work late into the night to structure a bail-out package targeted at cutting Greek debt to 120% of GDP

Light at the end of the tunnel? Not yet…

from Open Europe blog by Open Europe blog team
After countless missed deadlines, numerous strikes and some very exasperated European officials it seems there is an agreement in Greece. Finally.

from euro|topics
Greece’s governing parties approved the troika’s sweeping austerity package late Wednesday night, with the exception of the demanded pension cuts. The constant delays will cost Greece its head, warn some commentators, while others say the rigid austerity programme will lead straight to perdition.

Socialist candidate François Hollande (see picture) has begun to flesh out what his pledge to renegotiate the new European fiscal treaty on budgetary discipline would involve, if he wins the upcoming French presidential elections.

from euro|topics
The vice-president of the EU Commission, Neelie Kroes, on Tuesday declared Greece’s exit from the Eurozone justifiable. Kroes was voicing what many European politicians now want, write some commentators, while others see Greece as a victim of the Eurozone’s structural flaws.

External and internal factors of the Greek failure

from Public Affairs 2.0 by fhbrussels
Devaluation was invariably the path to survival for weaker European economies in the days before the euro. But when devaluation is no longer an option, there is evidently no choice for failing economies but to squeeze public spending and slash labour costs in the hope of paying off debt and restoring competitiveness.

Multilevel Europe: A win-win for EU and Ukraine (Analysis)

from EurActiv.com
A multilevel Europe is both a chance for the EU to survive and return to economic prosperity, while for Ukraine it opens new chances to get closer to the Union and envisage a shared future, writes Roman Rukomeda from Ukrainian foundation ‘People First’.

from Blogactiv by craigjameswilly
?last year. Between June and September 2011, the debt of eurozone governments as a percentage of GDP fell from 87.7% to 87.4%. The recovery?s combination of GDP growth, rising revenue, and falling unemployment meant debt was falling at an annualized rate of a full 1.2% points

Britain belongs at the centre of where decisions are made

from Blogactiv by UK in Europe
By Petros Fassoulas
For a while now the rhetorical narrative of those that advocate leaving the EU has been accompanied by a variety of alternatives to EU membership. Many ideas have been put forward, some quite ?exotic? or outright unrealistic, but there are two paradigms that are held up as the best possible options for Britain: Norway and Switzerland.

from open Democracy News Analysis – by Anton Pelinka
The sweeping reform programme of Viktor Orbán’s Hungarian government is provoking alarm among its domestic critics and European partners alike. But its economic policies as well as its political ambitions deserve to be put under the microscope, says Anton Pelinka.

from open Democracy News Analysis – by Pia Navazo
The effort by Spanish judge Baltasar Garzón to investigate killings of civilians during the era of General Franco?s dictatorship has made him a legal target. The process raises profound legal and moral issues, says Pia Navazo.
The well-known and high-profile Spanish judge Baltasar Garzón faces a private prosecution over his attempt to investigate crimes committed under the regime of Francisco Franco, which ruled Spain for thirty-six years following his forces? victory in the civil war of 1936-39.

from open Democracy News Analysis – by Peter Lippman
A film portrayal of the horrors of systematic rape during Bosnia’s war of 1992-95 highlights the victims’ suffering and bravery. But the romantic thread of Angelina Jolie’s work fails to convince, says Peter Lippman.
The legacy of the war in Bosnia-Herzegovina from 1992-95 continues to haunt survivors and pervade the politics and social life of the region. Its memorialisation is also beginning to take new forms. A case in point is the film In the Land of Blood and Honey, directed by the actress and campaigner Angelina Jolie. This story of torment and romance focuses on the sexual abuse of women as an instrument of war and terrorisation in Bosnia. In doing so it may play a valuable role in highlighting the predicament of the survivors and their brave struggles for justice.

from Blogactiv by Florian Pantazi
Amid international media acclaim, the European Council on Foreign Relations has recently released the results of its innovative EU foreign policy research project, the 2012 European Foreign Policy Scorecard.

from euro|topics
The Romanian Prime Minister Emil Boc resigned on Monday due to massive protests against his centre-right government’s austerity programme. Hours later President Traian B?sescu named the independent former head of the Foreign Intelligence Service, Mihai R?zvan Ungureanu, as his successor. Romania needs an independent technocrat, but he will have his work cut out for him dealing with the intrigues of the opposition, commentators write.

On Greece, a cacophony of commissioners

from Brussels Blog by Peter Spiegel
José  Manuel Barroso, the European Commission president, may have promoted his economic chief Olli Rehn to vice president last year with new responsibilities for managing the eurozone crisis, but in recent days a growing number of other commissioners seem to ?

by Open Europe blog team
The end-game in Greece continues to rumble on into another day of negotiations. On the rhetoric front, matters have heated up as well. Neelie Kroes, the Dutch EU commissioner told De Volkskrant, “It’s always said, if you let one nation go, or ask one to leave, the entire structure will collapse. But that is just not true.”

Yesterday 102 Conservative MPs wrote to the Telegraph backing our latest report on EU crime and policing, which argues that the UK should take advantage of a one-off opportunity in 2014 to opt out of around 130 laws covering this area.

The Northern League and the Rise of Violence in Europe: What Next?

from Blogactiv by Blogactiv Team
Guest post by Giuseppe Lenzo, university of Durham
Today it is opposing the austerity measures promoted by Mario Monti?s government, accusing him of stealing money out of Italians? pockets. However, yesterday it acted as protagonist as a key ally of Berlusconi?s coalition which was about to bring the country into the mire, with an alarmingly high public debt and peaking interest rates on ten-year sovereign bonds (over 7%) and increasing spread against the German state?s bund.

The EU should encourage Public Transport in Cities

from Blogactiv by Eberhard Rhein
Everywhere on earth metropolitan areas suffer from growing congestion. The situation is bound to become worse, especially in emerging countries, as everybody wants to have a car.
More individual traffic cannot be the answer, not the electric car, not even car-sharing. Cities have only one solution: extend their public transport systems, make them faster and more frequent, while at the same time inhibiting individual transport.

by Maggie Koerth-Baker
One of the things that makes it difficult to understand weather, climate, and long-term climate changes is the fact that, when something noticeable happens, there’s a good chance it’s being caused by more than one thing. So, when you look at a weather phenomenon and ask, “Is this being caused by anthropogenic climate change?”, there’s several (technically correct) ways that question could be answered.

from Global Voices Online by Ylenia Gostoli
This post is part of our special coverage Europe in Crisis.
The many protest movements that followed the implementation of austerity measures in a number of European countries dealing with the sovereign debt crisis, should have taught us that when a national economy is left at the mercy of interest rates and financial markets, sooner or later you can expect its people to express their discontent. Especially in a country, like Italy, already strained by years of government mismanagement, and where to the budget and democratic deficits, an information deficit needs to be added to the equation.

Malév, Hungary’s state airline since 1946, ceased operation on February 3, 2012, due to bankruptcy. According to news reports [hu], even the airline’s employees were informed about the shutdown just an hour or so in advance. Some passengers learned the news when they tried to check in at the Budapest Liszt Ferenc Airport.

from FT.com – Analysis
Angela Merkel?s plans for a shift in power from EU members to Brussels would generate constitutional problems within Germany and worries among allies, writes Quentin Peel