Revolution and Counter-Revolution in Egypt a Year after January 25th

On January 25, 2011, Egyptians from all social backgrounds marched to public squares across Egypt and began an 18 day revolution that captivated the world.  Calls rang out in Tahrir for ?Dignity, Freedom, and Social Justice.?  Stereotypes of Arabs as apathetic and politically backward crumbled as Tunisians and then Egyptians (and now countless others) led the world in the first post-Cold War revolution against the world?s growing inequalities.  Arabs were once portrayed as kowtowing to kings and authoritarian leaders, but now they are revolting against them.  Women and men, young and old, city dwellers and rural people joined together and fought the political and economic systems that oppressed them.

The Egyptian revolution neither began nor ended in those 18 days before Mubarak stepped down.  As anthropologists struggled, like many Egyptians and academic observers, to make sense of an overwhelming set of events, they drew on their fieldwork experiences from past decades to show how the revolution was rooted in long-standing day-to-day struggles for food, jobs, security, and dignity, as well as in years of organizing and activism among various groups–most notably labor and Islamic collectives.

from Savage Minds: Notes and Queries in Anthropology ? A Group Blog by Kerim
I was very impressed to read this blog post by Jeremy Trombley:
As an up and coming academic, I?m willing to put my career on the line and promise to only publish in open access journals. Putting my career on the line is a very real threat, since many departments look for publications in key (generally not open access) journals such as American Anthropologist when hiring. However, I?m confident that the people who will be evaluating me will overlook those issues if they understand why I made this choice, and will evaluate my work on its own merits and not on the journal that publishes it.

Committee for the Future of Print and Electronic Publishing invites conversation

from American Anthropological Association by Oona and Emilia
Anthropological publishing is undergoing rapid change as digital technologies, new forms of presentation, and an increasing desire to move to the free distribution of knowledge unfold. Whether existing models of publishing can be sustained is questionable. The AAA is currently assessing its own publication program and seeking to understand how that articulates with the wider realm of anthropological publishing. We need to understand current and emerging trends in the dissemination of knowledge so we can position the AAA to support its members in their intellectual activities.

from Savage Minds: Notes and Queries in Anthropology ? A Group Blog by jason
Recent comments on Hau and the opening of ethnographic theory remind me of what I always think of when I hear about the Bongobongo:
The time is gone when anthropologists could find solace in the claim that our main civic duty?and the justification for our public support?was the constant reaffirmation that the Bongobongo are ?humans just like us.? Every single term of that phrase is now publicly contested terrain, caught between the politics of identity and the turbulence of global flows. Too many of the Bongobongo are now living next door, and a few of them may even be anthropologists presenting their own vision of their home societies, or studying their North Atlantic neighbors. The North Atlantic natives who reject them do so with a passion. Those who do accept them do not need anthropologists in the welcoming committee.
?Michel-Rolph Trouillot, Global Transformations (2003:137)

American Anthropological Association Changes Opposition to Open Access ? Plus a Proposal to Do More

from Neuroanthropology by daniel.lende
The American Anthropological Association, responding to controversy over a January 12th letter sent to the White House opposing further federal support for open access, has issued a new statement that removes that opposition and embraces a diversity of publishing models moving forward. The Association?s Executive Boardannounced yesterday:

No bottleneck leading to Homo sapiens in Africa

from Dienekes’ Anthropology Blog by Dienekes
This is continuation of previous work by many of the same authors. They consider two alternative models of human origins:

from Savage Minds: Notes and Queries in Anthropology ? A Group Blog by Kerim
I?m currently on a committee which has been tasked with developing a set of ethical guidelines for visual ethnography in Taiwan. While I agreed to take part in this process because ?image ethics? are something I take very seriously, I am also very skeptical about the application of a medical ethics model to anthropology. For this reason I was happy to come across a paper by Bill Simpson entitled ?Ethical moments: future directions for ethical review and ethnography? which is a free (if not ?open?) download from JRAI. 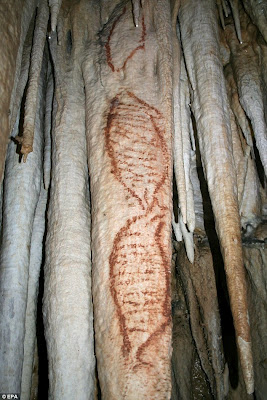 ‘The oldest work of art ever’: 42,000-year-old paintings of seals found in Spanish cave
The world’s oldest works of art have been found in a cave on Spain’s Costa del Sol, scientists believe. Six paintings of seals are at least 42,000 years old and are the only known artistic images created by Neanderthal man, experts claim. Professor Jose Luis Sanchidrian, from the University of Cordoba, described the discovery as ‘an academic bombshell’, as all previous art work has been attributed to Homo sapiens.